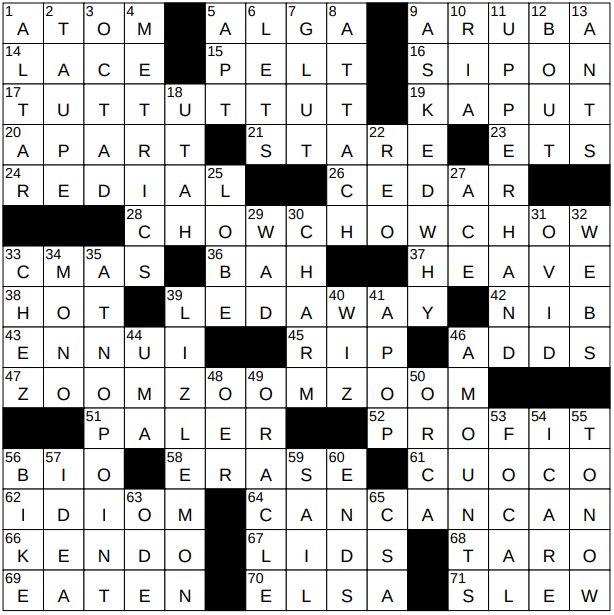 Constructed by: Rebecca Goldstein & Rachel Fabi
Edited by: Will Shortz

5 Growth in an aquatic bloom : ALGA

Aruba is one of the so-called ABC islands located off the northern coast of Venezuela. “ABC Islands” is a name given to the three westernmost islands of the Leeward Antilles in the Caribbean. The nickname comes from the first letters of the island names: Aruba, Bonaire and Curaçao. All three of the ABC islands are part of the Kingdom of the Netherlands.

The chow chow is a breed of dog that originated in China. The Chinese name for the breed is “Songshi Quan”, which translates as “puffy-lion dog”, a rather apt name given its appearance …

“Nib” is a Scottish variant of the Old English word “neb”, with both meaning “beak of a bird”. This usage of “nib” as a beak dates back to the 14th century, with “nib” describing the tip of a pen or quill coming a little later, in the early 1600s.

“Zoom-zoom” is a catchphrase used by the automaker Mazda. Mazda is based in the Hiroshima Prefecture in Japan. The ballpark where the Hiroshima baseball team plays was for many years known as the MAZDA Zoom-Zoom Stadium.

Etch A Sketch was introduced in 1960. The toy was developed in France by inventor André Cassagnes, who initially named it “L’Écran Magique” (The Magic Screen).

Kaley Cuoco is an actress from Camarillo, California who is best known for playing Penny, the female lead on the sitcom “The Big Bang Theory”. Cuoco’s love interest in the show is played by Johnny Galecki, and the two were romantically involved in real life for a couple of years. Cuoco is also getting a lot of exposure playing William Shatner’s daughter on priceline.com ads, and playing a genie in Toyota RAV4 commercials.

64 Glutes developed while dancing at the Moulin Rouge? : CAN-CAN CAN

Taupe is a dark, gray-brown color. The word “taupe” comes from the Latin name of the European Mole, which has skin with the same color.

5 Like the name Bell for the inventor of the telephone : APT

REO Speedwagon is an American rock band that formed in 1967, and is still going strong. The band’s biggest hits are “Keep On Loving You” (1980) and “Can’t Fight This Feeling” (1985). The founding members chose the name for the REO Speed Wagon flatbed truck. Note that the band’s name is one word “Speedwagon”, whereas the vehicle’s name uses two words “Speed Wagon”.

Spider-Man is a creation of Stan Lee and Steve Ditko, and first appeared in comics in 1962. He was a somewhat groundbreaking character in that his alter ego was a teenage high school student (Peter Parker), which marked the first time that a young person featured front and center as the superhero.

“30 Rock” is a sitcom on NBC that was created by the show’s star Tina Fey. Fey plays an ex-performer and writer from “Saturday Night Live” (SNL) and uses her experiences on that show as a basis for the “30 Rock” storyline. Fey plays Liz Lemon, the head writer for the fictional sketch comedy series “TGS with Tracy Jordan”.

“The Producers” is a 1968 satirical movie written and directed by Mel Brooks, and was indeed the first film he ever directed. Brooks adapted the movie into a hugely successful Broadway musical that won a record 12 Tony Awards. The original leads in the stage show, Nathan Lane and Matthew Broderick, then appeared in a 2005 movie adaptation of the musical version of the original film.

We absorbed our word “terminus” (plural “termini”) from Latin, and in both languages it means “end, final goal”. The Roman god Terminus presided over landmarks and boundaries, and was the focus of the festival of Terminalia at the end of the Roman year.