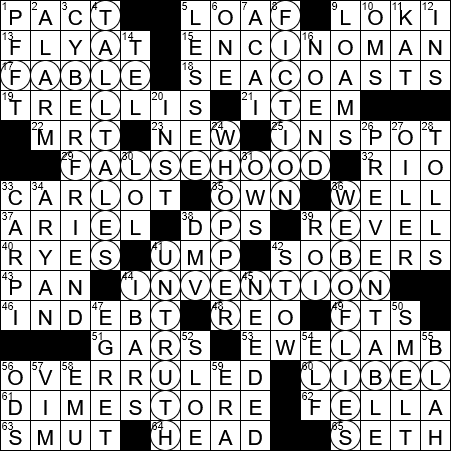 Themed answers together form a WEB OF LIES that criss-cross the grid:

“Encino Man” is a comedy film released in 1992 starring Brendan Fraser as a caveman who is brought back to life in the 20th century. The movie’s name comes from the location where the caveman is found, Encino in California. To help European audiences, who may not have heard of Encino, the movie was released there under the title “California Man”.

Thomas Jefferson was born a British subject in 1743 in the Colony of Virginia, one of ten children born to Peter Jefferson and Jane Randolph Jefferson. The Jefferson’s had four sons in all, with two dying in infancy. The remaining two sons inherited Peter’s estate, divided between them. Thomas came into 5,000 acres of land, including Monticello, and 20-40 slaves.

37 The girl in the Disney song “Kiss the Girl” : ARIEL

41 One who brushes off a plate, informally : UMP

The REO Speed Wagon was a light truck introduced in 1915, and a precursor to the modern pickup truck. The rock band REO Speedwagon is named for the truck, but note the difference between the spelling of Speedwagon (the band) and Speed Wagon (the truck).

60 Writing that can get you in trouble : LIBEL

64 Circle in the game hangman : HEAD

The word-guessing game Hangman seems to have been played first in Victorian England. At one time it was known as “Birds, Beasts and Fishes” as the words to be guessed had to be types of animal.

Seth Rogen is a Canadian comedian who got a lot of credit for his supporting role in “The 40-Year-Old Virgin”. That led to him being cast as the lead in the 2007 film “Knocked Up”. Rogen also co-directed and co-starred in “The Interview”, a movie that created a huge ruckus in North Korean regime.

7 Berry in a purple smoothie : ACAI

58 Fast runner Down Under : EMU