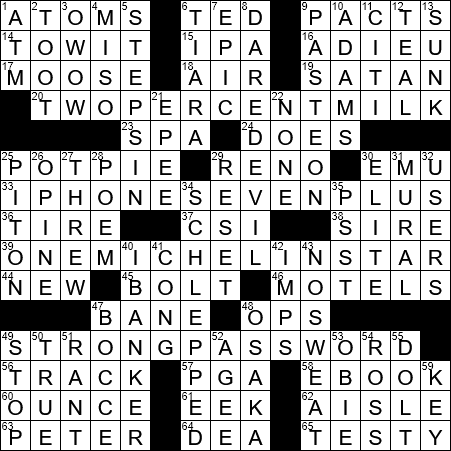 Leucippus lived in the 5th century BC in ancient Greece. He founded the Atomist Movement. The atomists believed that the world was composed of just atoms and voids, and that the atom was an indestructible particle. How wrong they were …

The verb “to wit” means “to know”. The verb really isn’t used anymore except in the phrase “to wit” meaning “that is to say, namely”.

16 Something that is bid : ADIEU

The moose is the largest species in the deer family, and can stand almost at 7 feet at the shoulder. Moose are a little unusual in that they are solitary animals, unlike other deers who tend to move in herds. We use the term “moose” here in North America, but confusingly, the same animal is referred to as “elk” in British English.

Dana Carvey, along with the likes of Phil Hartman and Kevin Nealon, was part of the new breed of “Saturday Night Live” (SNL) comedians credited with resurrecting the show in the late eighties. One of Carvey’s most popular characters was the Church Lady, and he became so associated with her that among fellow cast members Carvey was often referred to simply as “the Lady”. Another favorite Carvey character was Garth Algar who went to feature in the “Wayne’s World” movies. Carvey had open-heart surgery in 1997 to clear a blocked artery, but the surgical team operated on the wrong blood vessel. To recover, he had to have five more procedures. He ended up suing for medical malpractice and donated his $7.5 million compensation payment to charity.

The city of Ypsilanti, Michigan is named for Demetrius Ypsilanti, a hero in the Greek War of Independence. Among its claims to fame, Ypsilanti was the home to the original Dominick’s pizza store.

In Greek mythology, Zeus served as the king of the Olympic gods, and the god of the sky and thunder. He was the child of Titans Cronus and Rhea, and was married to Hera. Zeus was the equivalent of the Roman god Jupiter, who had similar realms of influence.

60 Unit in a baby announcement : OUNCE

The Bermuda Triangle is an area in the western part of the North Atlantic Ocean that is famous for the loss of ships and aircraft under mysterious circumstances. The triangular area is roughly defined by Miami, Florida, and the islands of Bermuda and Puerto Rico.

21 Something waved in the Olympics : EPEE

53 Award co-administered by the American Theater Wing since 2014 : OBIE