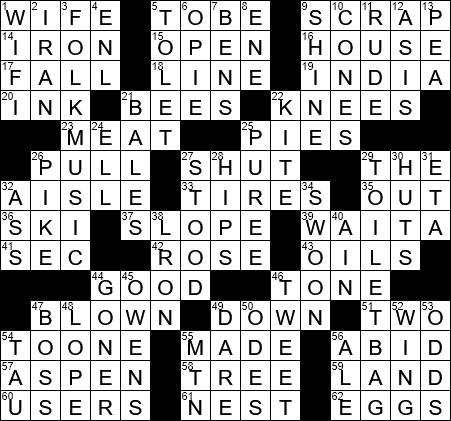 Today’s Reveal Answer: Two to One

Themed answers are all in the across-direction. They come in pairs that immediately follow each other in the list of clues.

There was a whole series of phrases involving animals that developed in the 1920s, with all designed to indicate a superlative. Some are still around today, such as “the cat’s pajamas” and “the bee’s knees”. Others didn’t last too long, e.g. “the eel’s ankle” and “the snake’s hip”.

Benjamin Franklin’s portrait is featured on one side of the hundred-dollar bill (also called a “C-spot, C-note, benjamin”), and Philadelphia’s Independence Hall on the other side. There is a famous error in the image of Independence Hall. If you look closely at the clock face at the top of the building you can see that the “four” is written in Roman numerals as “IV”. However, on the actual clock on Independence Hall, the “four” is denoted by “IIII”, which has been the convention for clock faces for centuries.

The abbreviation “ETA” (estimated time of arrival) can be found inside the phrase “ticket abbreviation”.

L. Ron Hubbard wrote a self-improvement book in 1950 called “Dianetics: The Modern Science of Mental Health”. A few years later, he used the concepts in the book as he founded his Church of Scientology.

The Ain is a river in the east of France that gives its name to the Ain department. The Ain flows into the Rhône not too far from the city of Lyon.

49 Choice in a sleepover game : DARE