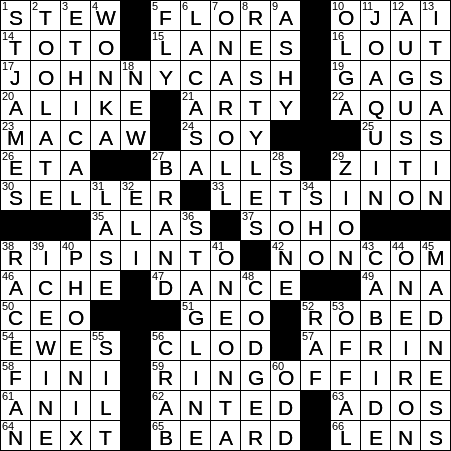 Some of the themed answers are in a RING at the center of the grid. Each needs the word FIRE added at the start to make sense. Also, there are a couple of “RING OF FIRE” answers included to add some additional “heat” to the puzzle:

I must admit that I am not a big country music fan, but who doesn’t love Johnny Cash? The man had such a unique voice, and indeed unique songs. I think that his biopic, “Walk the Line”, is very cool, as is the title song itself. Recorded back in 1956, “Walk the Line” is relatively creative for “popular” music. The basic rhythm of the song emulates the sound of a freight train, the “boom-chicka-boom” sound. Cash’s guitar has a unique tone to it as it plays this rhythm, achieved by threading a piece of paper between the guitar strings giving the rhythm a bit of a “buzz”. Above the rhythm line, each of the five verses is sung in different keys. You can actually hear Cash hum a note signifying the key change at the start of each verse. With all these modulations, the final verse is sung a full octave lower than the first. A remarkable tune …

25 Inits. before some presidents’ names : USS …

The area of London called Soho had a very poor reputation for most of the 20th century as it was home to the city’s red light district. Soho went through a transformation in recent decades, and has been a very fashionable neighborhood since the 1980s.

To excoriate is to abrade or chafe. “Excoriate” also means “strongly denounce” something or someone.

An NCO or “noncom” is a non-commissioned officer in the armed forces. Usually, such an officer is one who has earned his or her rank by promotion through the enlisted ranks. A good example would be a sergeant major (sgt. maj.).

Afrin is a nasal spray made by Bayer that has oxymetazoline as an active ingredient. Oxymetazoline is a topical decongestant.

59 17-Across hit … or a hint to four connected answers in this puzzle : RING OF FIRE

“Anil” is another name for the indigo plant, as well as the name of the blue indigo dye that is obtained from it. The color of anil is relatively close to navy blue. The main coloring agent in indigo dye is a crystalline powder called indigotin.

1 Place that’s orange on a Monopoly board : ST JAMES

Felipe VI became King of Spain in 2014 when his father, King Juan Carlos I, abdicated. Felipe is quite the competitive sailor, and comes from a sailing family. He was a member of the Spanish sailing team in 1992 Olympics held in Barcelona. His father and sister also sailed for Spain’s Olympic sailing team.

Saint Olga of Kiev was a ruler of the medieval state of Rus (located in Eastern Europe) from 945 – 963 AD. By all accounts, Olga was a brutal woman in the early days of her reign. She came to power after her husband Igor’s assassination and ruled as regent, acting for their son. She carried out terrible acts of vengeance on those responsible for her husband’s death. Later in her rule, she converted to Christianity. She was eventually proclaimed a saint for her efforts to spread the Christian religion in Rus.

The Eastern Orthodox Church is the second-largest of Christian religious tradition in the world, after Roman Catholicism. Many Orthodox churches identify themselves along national lines, such as Greek Orthodox, Russian Orthodox and Serbian Orthodox, etc.

Actor Joaquin Phoenix is the brother of actress Summer Phoenix and of the late River Phoenix, who was also an actor.

Augusto Pinochet was dictator of Chile between 1973 and 1990. He came to power in a coup (backed by the US) that overthrew the democratically elected socialist government led by President Salvador Allende. Pinochet’s reign led to the execution of thousands, and the internment and torture of tens of thousands.

A firebrand is a piece of burning wood that is used to kindle a fire. In a figurative sense, a firebrand is an agitator, someone who kindles passions.

Firestone is a tire company that was founded by Harvey Firestone in 1900. The Firestone company took off when it was selected by Henry Ford as the supplier of tires for his Model T.

“Ray Donovan” is a very successful Showtime crime drama series starring Liev Schreiber in the title role. Donovan is a law firm’s “fixer” who helps out the rich and famous clients.

Ice wine is a sweet dessert wine that is produced using grapes that have frozen on the vine. The grapes must be harvested very quickly and pressed in a cold environment while still frozen. Because it is only the water in the grapes that freezes, the juice from the pressing is more highly concentrated, containing more sugar and other dissolved solids. Most of the world supply of ice wine comes from Canada and Germany.

The city of Oneonta in Upstate New York grew from a hamlet called “Milfordville” that started to develop around 1800. The name was changed to Oneonta in 1832, when it was incorporated as a village within the surrounding town of Oneonta. The city is home to the State University of New York at Oneonta (SUNY Oneonta) that started out as a normal school and a teacher’s college in 1889.

The golf club known as the 1-iron is the lowest lofted of all the irons. However, golfer big hitter John Daly owned a 0-iron that was specially made for him by Wilson.

Today, we mostly think of silt as a deposit of sediment in a river. Back in the mid-1400s, silt was sediment deposited by seawater. It is thought that word “silt” is related to “salt”, as found in seawater.