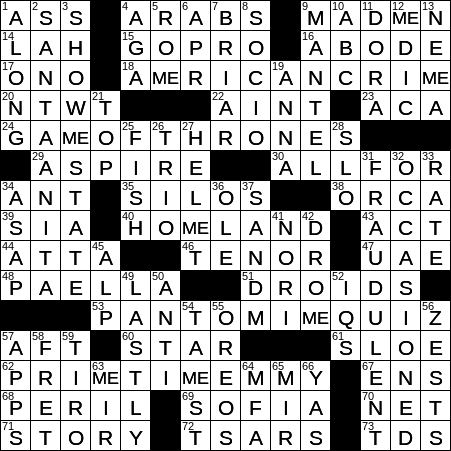 Constructed by: David Kwong
Edited by: Will Shortz

Themed answers are shows that have won Primetime Emmy Awards, with each being clued with the year(s) that award was won. And, the letters ME (sounds like “EMMY”) appear in several squares in the grid:

“Homeland” is a psychological drama on Showtime about a CIA officer who is convinced that a certain US Marine is a threat to the security of the United States. The show is based on a series from Israeli television called “Hatufim” (Prisoners of War”). I saw the first season of this show and highly recommend it …

The purport or tenor of something is its general sense.

62 What each of the programs in this puzzle has won at least once : PRIMETIME EMMY

The Emmy Awards are the television equivalent of the Oscars from the world of film, the Grammy Awards in music and the Tony Awards for the stage. Emmy Awards are presented throughout the year, depending on the sector of television being honored. The most famous of these ceremonies are the Primetime Emmy Awards and the Daytime Emmy Awards. The distinctive name “Emmy” is a softened version of the word “immy”, the nickname given to the video camera tubes found in old television cameras.

Half of the letters in the word “nine” are letters N (ens).

“Show-Me State” is the unofficial nickname of Missouri. The moniker was given to the state apparently because the population was noted for being conservative and non-credulous.

“Coriolanus” is one of William Shakespeare’s tragedies. The play tells the story of the real-life Roman general Gaius Marcius Coriolanus, who lived in the 5th century BC.

13 Site of a Herculean feat : NEMEA

An aerodrome is a facility where aircraft take off and land. An aerodrome could be a small airstrip, a large commercial airport or even a military airbase. The term “aerodrome” is used quite often in the UK, but rarely here in the US.

45 The Matterhorn is one : ALP