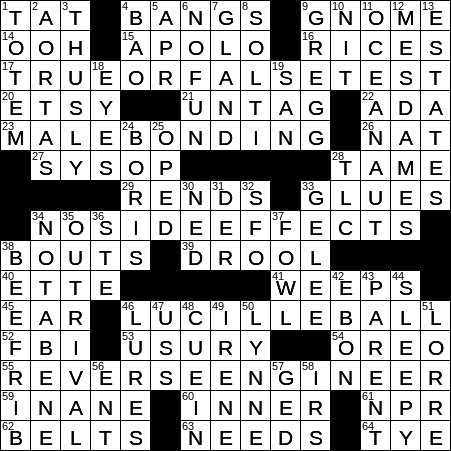 Themed answers include the names of famous ENGINEERS, but written in REVERSE. Note that themed clues give the number of letters in the engineer’s name:

4 Apt hairstyle for a gunslinger? : BANGS

“Bromance” is the name given these days to a close relationship between two straight males.

The city of Jamestown, New York was named for James Prendergast who settled in the area in the early 1800s. Jamestown’s most famous daughter is comedian and actress Lucille Ball, and the city is now home to the Lucille Ball Desi Arnaz Museum.

The FBI was the first agency to create a “most wanted list”, introducing the “FBI Ten Most Wanted Fugitives” list in 1950. Director J. Edgar Hoover came up with the idea after fielding a question from a journalist asking for the names and description of the “toughest guys” being sought by the FBI. One misconception about the FBI’s Ten Most Wanted list is that it is ranked, but there is no such thing as the “#1 Most Wanted Fugitive”.

The East Asian nation of Mongolia lies between Russian to the north and China to the south. With an area of over 600,000 square miles and a population of about 3 million people, Mongolia is the most sparsely populated sovereign nation on the planet. Almost half of the Mongolian populace lives in the capital city of Ulan Bator.

61 Producer of the “Code Switch” and “Planet Money” podcasts : NPR

National Public Radio (now just “NPR”) was launched in 1970 after President Johnson signed into law the Public Broadcasting Act of 1967. The intent of the act was to provide funding for radio and television broadcasting that wasn’t simply driven by profit. As a longtime fan of the state-funded BBC in the UK, I’d have to agree with act’s intent …

In the nautical world, a tye can be either a chain or rope and is used to hoist a spar up a mast.

The function of the male’s prostate gland is to secrete a fluid that helps to prolong the lifespan of spermatozoa in the vaginal tract.

Gregg Popovich took over as coach of the San Antonio Spurs in 1996. He is often referred to as “Pop” or “Coach Pop”. Popovich holds the record for the NBA coach with the longest run of consecutive winning seasons.

An aquanaut (also “oceanaut”) is a diver who occupies an underwater habitat, only returning to the surface after an unusually long period of time.

Boris Yeltsin was elected the first President of the Russian Soviet Federative Socialist Republic in 1991, at a time when Mikhail Gorbachev was President of the Soviet Union. When Gorbachev resigned, and the Soviet Union collapsed, Yeltsin emerged with his position intact. Yeltsin was re-elected in 1996, but his popularity declined in the late 1990s as the populace became discouraged with the country’s economic troubles and with political corruption.

“Gelée” is the French word for “frost”. It’s also the word used in France for jello.

Ebony is another word for the color black (and is often shortened to “ebon” in poetry). Ebony is a dark black wood that is very dense, one of the few types of wood that sinks in water. Ebony has been in high demand so the species of trees yielding the wood are now considered threatened. It is in such short supply that unscrupulous vendors have been known to darken lighter woods with shoe polish to look like ebony, so be warned …

The USS Missouri was commissioned in 1944 and decommissioned in 1955, but reactivated in 1984 after which she even participated in Operation Desert Storm in 1991. Since 1998, Big Mo (as she is known familiarly) has served as a museum ship at Pearl Harbor. It was on the Missouri that the Japanese surrendered, marking the end of WWII.

Hurricane Irene caused extensive flooding in 2011 as it traveled through the Caribbean, up the East Coast of the United States and into the Atlantic seaboard of Canada. The hurricane was unusual in that it came so far up north. Fifty-five deaths were attributed to Irene.

Lynne Cheney is the wife of former Vice President Dick Cheney. Ms. Cheney was actually mentioned as a possible running mate on the George W. Bush ticket in 2000. Dick Cheney headed up the nominating committee for the VP nominee, and ended up getting the slot himself.

Chuck Lorre created many great sitcoms that have stood the test of time. Included in the list of his shows are “Grace Under Fire”, “Cybil”, “Dharma & Greg”, “Two and a Half Men” and “The Big Bang Theory”. Lorre is famous for the “vanity cards” that appear for a few seconds at the end of his shows. The cards include a message directly from Lorre, perhaps an observation on life, and maybe something quite controversial. CBS has had to censor several of Lorre’s vanity cards, but you can read the uncensored versions on his website.

56 Treater of a deviated septum, for short : ENT