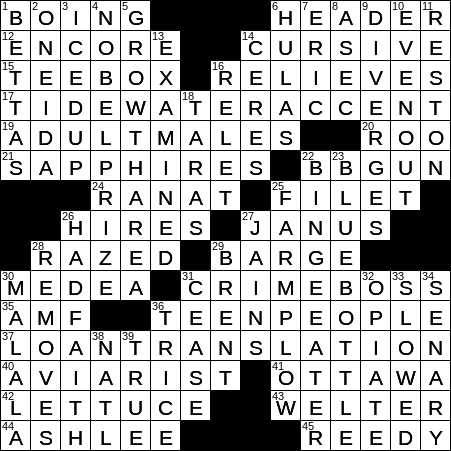 “Encore!” is French for “again, one more time!”, and is a shout that an audience member will make here in North America to request another song, say. But, the term is not used this way in France. Rather, the audience will shout “Bis!”, which is the Italian for “twice!”

Cursive handwriting is often referred to as “longhand” or “script”, although when I was learning it at school we knew it as “joined-up writing”. The term “cursive” ultimately comes from the Latin verb “currere” meaning “to run”. The idea is that the letters of words are written with a “running” hand.

Beef Wellington is an extremely rich dish comprising filet mignon coated with pâté and duxelles (a mixture of sauteed mushrooms and herbs), which is then baked in puff pastry. Despite the claims that the “Wellington” in the name is a reference to the Duke of Wellington, there’s no real evidence that is the case. Beef Wellington is very similar to a classic French dish called “filet de bœuf en croûte”.

“Medea” is a tragedy penned by Ancient Greek playwright Euripides. Dealing with the myth of Jason and Medea, it was not received well at its debut in 431 BC. It was premiered at that year’s Dionysia festival in Athens, competing against plays by Euphorion and Sophocles. Euphorion’s play won the competition and Euripides’ “Medea” came in last.

AMF Bowling Centers is an operator of bowling alleys, and is in fact the largest such company in the world.

40 One who gets lots of tweets? : AVIARIST

44 Simpson who infamously lip-synched a song on “S.N.L.” : ASHLEE

Ashlee Simpson is the younger sister of Jessica Simpson. They are both reality show stars. I know no more …

The betta is a small freshwater fish. It is quite colorful, and so is a popular fish for an aquarium. Bettas are aggressive little creatures, and are commonly called Siamese fighting fish. Apparently, housing two males in a relatively small aquarium will result in the death of one.

6 Dances taught by a kumu : HULAS

The phrase “it’s a wash”, meaning “there’s no gain either way”, comes from the underworld. Back in the 19th century, a “wash” was a fake transaction between a seller and a buyer for some illegal purpose.

14 Body in our solar system that was considered a planet in the first half of the 19th century : CERES