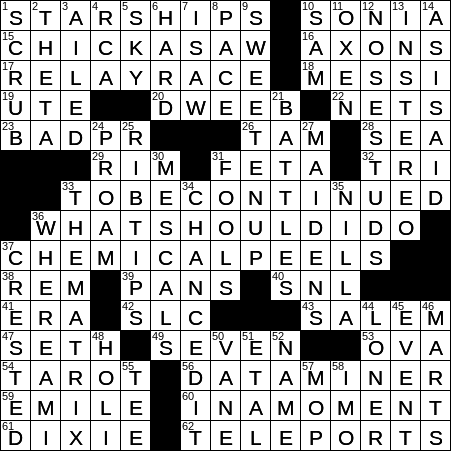 Neil Gorsuch was nominated to the Supreme court by the Trump administration, and assumed office in 2017. Gorsuch took the seat on the court that was left vacant with the passing of Justice Antonin Scalia in 2016. Gorsuch is the first Supreme Court justice to serve alongside another justice for whom he once clerked, doing so for Anthony Kennedy from 1993 to 1994.

18 Five-time winner of FIFA’s player of the year award : MESSI

23 What might hurt a celebrity’s Q Score : BAD PR

“Q Score” is a measurement used in the world of marketing. The Q Score for a brand or company is its appeal, how highly it is regarded. The Q stands for “quotient”.

29 Word with Pacific or basketball : RIM

The California gold rush actually started in 1848. The first to exploit the find were those people already in California. By 1849 the word had spread and gold-seekers started to arrive from all over the world. The “out-of-towners” who arrived in 1849 became known as forty-niners.

49 This clue’s number divided by this clue’s answer : SEVEN

59 Who sings “Some Enchanted Evening” in “South Pacific” : EMILE

The 1949 Rodgers and Hammerstein musical “South Pacific” is based on stories from the 1947 book “Tales of the South Pacific” by James A. Michener. “South Pacific” really is a classic show featuring some classic songs, like “Bali Ha’i”, “I’m Gonna Wash That Man Right Outa My Hair”, “Some Enchanted Evening” and “Happy Talk”.

Dixie Cup is a brand of disposable papers cups. The first such cups were introduced to promote hygiene at shared water fountains, as prior to disposable cups, glasses or dippers were shared by people taking a drink. As such, the Dixie Cup was introduced in 1907 as the “Health Kup”. The name was changed in 1919 to Dixie Cup, after a line of dolls (presumably as the cups were relatively small).

62 Travels like the fly in sci-fi’s “The Fly” : TELEPORTS

2 Letter found between two vowels in the alphabet : THETA

Samwise Gamgee is the sidekick to Frodo Baggins in Tolkien’s “The Lord of the Rings”. “Sam” is portrayed by American actor Sean Astin in the Peter Jackson, big screen adaptations of the novels.

The AT&T Pebble Beach National Pro-Am golf tournament was established as an annual event in 1937, when it was hosted by Bing Crosby, who was a huge fan of the sport. The Bing Crosby name was used for the tournament even after his death in 1977, eventually giving way to corporate sponsor AT&T in 1985.

30 Drinks made from agave : MESCALS

33 Hit 1999 film that popularized a slo-mo effect known as “bullet time” : THE MATRIX

Holi is a Hindu festival celebrated in spring that is also known as the Festival of Colours.