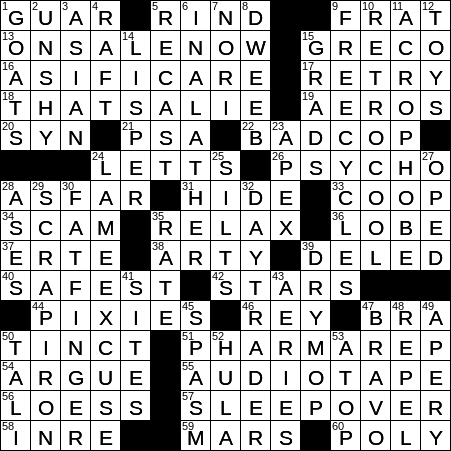 Guar gum is a powder that is extracted from guar beans. About 80% of the world’s supply of guar gum comes from India. It is used mainly in the food industry, often as a substitute for gluten in gluten-free recipes and products.

The Aeros were the professional ice hockey team based in Houston, Texas until 2013. The Houston Aeros were added to the International Hockey League in 1994. The franchise name was taken from the World Hockey Association’s Houston Aeros of the seventies, the team for whom Gordie Howe played. When the team moved to Des Moines in 2013, they became the Iowa Wild.

“Illustration” and “example” are synonyms (syns.).

22 Half of an interrogation team : BAD COP

26 First American film in which a toilet is heard being flushed (1960) : PSYCHO

47 Word with nursing or training : BRA

51 One making a living by pushing drugs, informally : PHARMA REP

Cashmere wool comes not only from the Cashmere goat, but also from other types of goat. Technically, cashmere isn’t really a wool, but rather a hair. Unlike hair, wool is elastic and grows in clusters.

5 Like the role of Albus Dumbledore after the second Harry Potter movie : RECAST

Professor Albus Dumbledore is the headmaster of the school for wizards called Hogwarts, in the Harry Potter universe. Dumbledore’s specialties are nonverbal spells and alchemy. Author J. K. Rowling chose the name Dumbledore as it is an Early English word for a bumblebee. Apparently she pictured him wandering around, humming to himself.

Poindexter is a character in the television show “Felix the Cat”, which originally aired in the late fifties. He is a nerdy type, wearing a lab coat and glasses with thick lenses. The character lends his name to the term “poindexter”, meaning just that, a nerd.

“Ase’s Death” is a movement in Edvard Grieg’s beautiful “Peer Gynt” suite. The suite is a collection of incidental music that Grieg composed for Ibsen’s play of the same name. Ase is the widow of a peasant, and the mother of Peer Gynt.

“Project Runway” is a reality show that is hosted by model Heidi Klum. On the show, contestants compete by presenting clothes designs having been given limited time and materials. “Project Runway” is now a worldwide franchise. North of the border, the show is called “Project Runway Canada” and is hosted by supermodel Iman. The show in the UK is known as “Project Catwalk” and has had several hosts, including Elizabeth Hurley and Kelly Osbourne.

52 Activity for which you need a fair amount of wiggle room : HULA