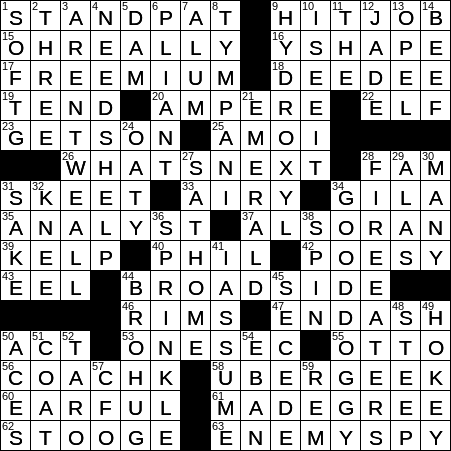 25 What “mía” means across the Pyrenees : A MOI

34 River that meets the Colorado at Yuma : GILA

The Colorado River rises in the Rocky Mountains, flows through the southwestern US and northwest Mexico, and empties into the Gulf of California. Famously, it is the Colorado that forms the Grand Canyon. The best known dam on the river is the Hoover Dam, which forms Lake Mead.

The city and county of Yuma, Arizona take their name from the Quechan (aka “Yuma”) Native American tribe that inhabited the area.

Potassium iodide is an important nutrient, and is the most common additive used in “iodized” table salt. The addition of a source of iodine to table salt is a public health measure taken prevent iodine deficiency. Additional iodine in the diet isn’t really necessary for those who eat a reasonable amount of seafood, as there is a lot of iodine in the oceans.

Originally, a geek was a sideshow performer, perhaps one at a circus. We use the term “geek”today for someone regarded as foolish or clumsy, and also for someone who is technically driven and expert, but often socially inept.

“Über” is the German word for “over, across, above”.

The letter G in the words “Algeria” and “Egypt” is a soft G.

8 Part of a percussion ensemble : TYMPANI

The timpani are also called the kettledrums. “Timpani” is an Italian term with the same meaning as in English, the plural of “timpano”.

52 Its leaves are used for the Hawaiian dish laulau : TARO

Laulau is a Hawaiian dish usually consisting of pork wrapped in taro leaf, and is served with a side of rice or macaroni salad. The main part of the dish is traditionally prepared by baking it in an underground oven called an imu.