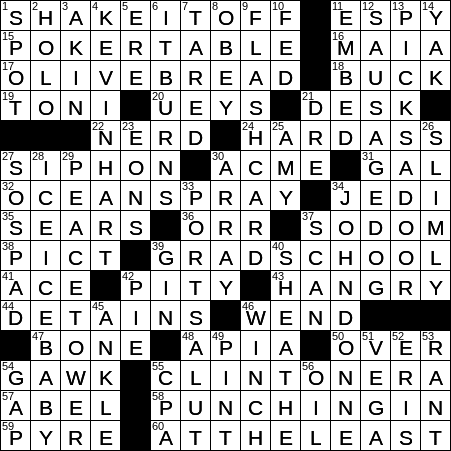 1 #1 Taylor Swift song about defying one’s critics : SHAKE IT OFF

Maia is one of the Pleiades of Greek mythology, and is the eldest of the Seven Sisters.

The Acme Corporation is a fictional company used mainly by Looney Tunes, and within the Looney Tunes empire it is appears mostly in “Road Runner” cartoons. Wile E. Coyote is always receiving a new piece of gear from Acme designed to finally capture the Road Runner, but the equipment always leads to his downfall.

35 “Where America shops for value,” per an old slogan : SEARS

The James Norris Memorial Trophy is awarded to the top defensive player in the NHL each year, based on votes by members of the professional Hockey Writers’ Association. Bobby Orr won the award every single season from 1967-1975. Bobby Orr is regarded as one of the greatest hockey players of all time. By the time he retired in 1978 he had undergone over a dozen knee surgeries. At 31 years of age, he concluded that he just couldn’t skate anymore. Reportedly, he was even having trouble walking …

The Picts were a Celtic people who lived in ancient Scotland, in the east and north of the country. The Picts gradually disappeared as an identifiable group, merging with the Gaels in the 10th century.

The Roman Emperor Hadrian is best remembered today for building Hadrian’s Wall, a barrier marking the northern limit of Roman Britain. Construction of the stone wall started in AD 122, and the end result was the most fortified border in the whole of the Roman Empire. Much of Hadrian’s Wall can still be seen today, and I’ve had the privilege of walking along part of it when visiting Northern England.

“About Last Night” is a 1986 film that is based on a 1974 David Mamet play called “Sexual Perversity in Chicago”. It stars Rob Lowe and Demi Moore as a couple of yuppies who are both entering a serious relationship for the first time.

11 One reporting a fight : EMBED

13 Chooses at the request of Monty Hall, say : PICKS A DOOR

Amy Schumer is a stand-up comedian, and an alumna of the reality TV show “Last Comic Standing”, in which she placed fourth. Schumer now has her own comedy series “Inside Amy Schumer”, which airs on Comedy Central. Amy is a first cousin once removed of Chuck Schumer, the senior US Senator from New York.

“Ice Ice Baby” is 1990 song released by rap artist Vanilla Ice. What’s unusual about “Ice Ice Baby” is that it’s a rap song this oldster will actually listen to sometimes. Admittedly, that’s because it features a bassline lifted directly from the 1981 song “Under Pressure” by Queen. And, the lifting of the bassline led to quite a bit of controversy and a lawsuit.

52 Harmonia’s opposite in Greek myth : ERIS

Palm oil and coconut oil are two vegetable oils that aren’t very good for our health. Both are high in saturated fat.