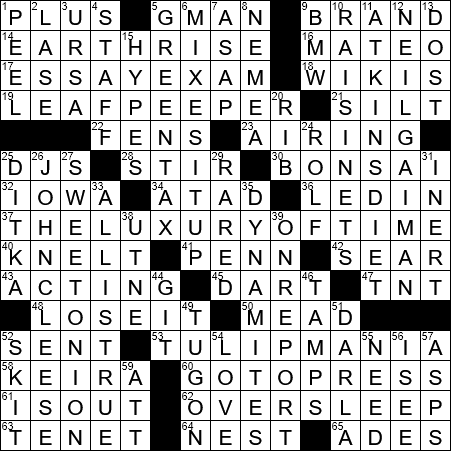 “Public Enemies” is a 2009 crime drama tells the story of bank robber John Dillinger and his pursuit by the FBI. Star of the movie is Johnny Depp, who plays Dillinger.

14 Dawn of the Space Age? : EARTHRISE

“Earthrise” is the appearance of the Earth above the horizon when viewed from, say, the moon. There is a famous photograph with the title “Earthrise” that was taken from lunar orbit by astronaut William Anders during the Apollo 8 mission in 1968. The picture shows the Earth rising above the surface of the moon, and is a beautiful image.

The Gospel of Matthew is the first book of the New Testament in the Christian Bible. Despite the book’s title, the author is not named, with the words “according to Matthew” added about two centuries after it was written.

“Leaf peeping” is the name given to the activity of viewing and photographing the change in the colors of foliage during the fall. Leaf peepers usually head for New England and the American Midwest in order to enjoy the rich colors exhibited by deciduous trees and shrubs in the autumn months.

The Iowa Hawkeyes are the sports teams of the University of Iowa in Iowa City. The school’s mascot is Herky the Hawk, who first appeared at n Iowa State football game in 1959.

41 Half of a long-running Vegas show : PENN

Penn Jillette is one half of the duo of magicians known as Penn & Teller (Penn is the one who talks). Penn teamed up with Teller on stage in 1981, having met him through a friend back in 1974. As well as being talkative onstage, Penn is very vocal offstage when it comes his causes and beliefs. He is a devout atheist, a libertarian and a supporter of free-market capitalism.

50 Lake on the Arizona/Nevada border : MEAD

The reservoir on the Colorado River known as Lake Mead used to the largest reservoir in the US. Located outside Las Vegas, drought and increasing demand for water has shrunk Lake Mead so that now Lake Sakakawea on the Missouri in North Dakota has a larger surface area and volume of water.

3 Major thing in the heavens? : URSA

8 Site of one of Hercules’ labors : NEMEA

Raisinets are chocolate-covered raisins produced by Nestlé. They are often sold in boxes in movie theaters.

Mike Ditka is a retired NFL player, and retired coach of Chicago Bears and New Orleans Saints. Ditka and Tom Flores are the only people to have won Super Bowls as a player, an assistant coach, and as a head coach.

Horses “rear up” on their hind legs. I think that the term “rare up” is used withthe same meaning, but it might be slang.

33 Original title of Shakespeare’s “Henry VIII” (the latter not used until the First Folio in 1623) : ALL IS TRUE

“To tamp” means “to pack down tightly by tapping”. “Tamp” was originally used to specifically describe the action of packing down sand or dirt around an explosive prior to detonation.