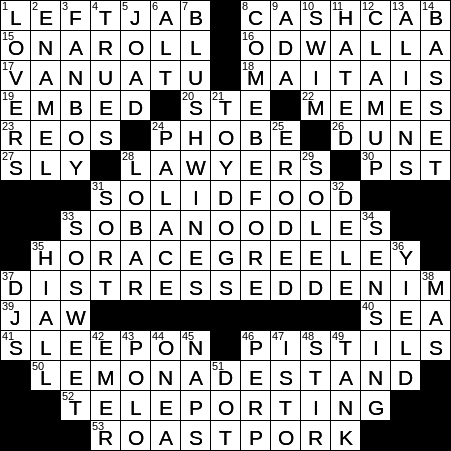 “Cash Cab” is a fun TV game show that originated in the UK and is now shown all over the world, including here in North America. In the US version, contestants are picked up in a cab in New York City and asked questions during their ride.

The Republic of Vanuatu is an island nation in the South Pacific. The country became independent in 1980 after having suffered through Spanish, French and British rule.

Fanboys and fangirls are fans, but fans of a very specific subject in a particular field. So, someone might be a fan of home computing, but an Intel fanboy would have an enthusiasm for CPUs made by Intel.

The term “blush” has only been used in the world of wine since the late seventies, and is really only used here in the US. Today we think of a blush as a relatively sweet pink wine, and a rosé as something more dry.

13 Ones supposedly eligible for, but never yet seen in, the Miss Universe pageant : ALIENS

31 Instruction in a Word menu : SORT

36 Info for an investor : YIELD

In the world of finance and investing, the yield curve for a particular investment is the relation between the interest rate that can be locked in, and the length of time the loan will be in place. Typically, the longer you are willing to lend your money (say by buying a government security), then the higher interest rate the borrower is willing to pay. So, the yield tends to move upwards over time.

43 Game that becomes another game when its last two letters are switched : POLO

The verb “to mug” means to make an exaggerated facial expression. The term comes from mugs used to drink beer (called Toby mugs) that are the made in the shape of heads with grotesque expressions. “Mug” can also be a noun meaning “face”.