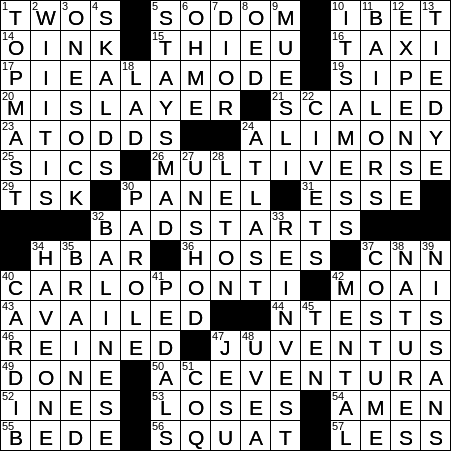 5 Biblical city on the plain of Jordan : SODOM

15 President who resigned during the fall of Saigon : THIEU

Nguyen Van Thieu was president of South Vietnam from 1967 to 1975. He was also the last person to hold the office, as it was abolished following the reunification of the country at the end of the Vietnam War.

In its most common usage, “alimony” is a payment made by one spouse to another for support after a legal separation. The term derives from the Latin “alimonia”, meaning “nourishment, food, support”.

The renowned Italian film producer Carlo Ponti was not quite as famous as his celebrity wife Sophia Loren. Ponti met Loren as a contestant in a beauty contest he was judging in 1950. Back then she was a budding young actress still using her real name, Sofia Lazzaro. The two married in 1957 even though divorce was illegal at the time in Italy, so Ponti was still married to his first wife.

“Doctor Zhivago” is an epic novel by Boris Pasternak that was first published in 1957. I haven’t tried to read it the book, but the 1965 film version is a must-see, directed by David Lean and starring Omar Sharif in the title role. The story centers on Yuri Zhivago, a doctor and poet, and how he is affected by the Russian Revolution and the Russian Civil War.

44 Some displays of power, for short : N-TESTS

Ace Ventura was the title character in two movies, i.e. “Ace Ventura: Pet Detective” (1994) and “Ace Ventura: When Nature Calls” (1995). In both films, the title role was played by Jim Carrey.

1 Something sailors may see over the horizon : TOPMAST

Before the advent of steel masts, the masts of larger sailing ship were not made of one piece of wood. Instead, the mast was divided into sections, with each section having its own set of rigging lines. The lower section was known as the mainmast, foremast or mizzenmast, depending on its location fore and aft on the vessel. The topmast was located above the lower mast. If there was a section above the topmast, it was known as a topgallant or royal mast.

“Skald” is a Scandinavian term meaning “poet”, and refers in particular to the poets of the Viking Age and the Middle Ages.

8 Masterwork in philology, for short : OED

Philology is the study of literature, and language used in literature. The Greek “philologia” translates as “love of words, speech”.

“Muesli” is a Swiss-German term describing a breakfast serving of oats, nuts, fruit and milk. “Muesli” is a diminutive of the German word “Mues” meaning “puree”. Delicious stuff …

A brasserie is a kind of French restaurant that’s usually a step up from a bistro. “Brasserie” is the French word for “brewery”, and the original brasseries in France served beer that was brewed on the premises.

1 Something sailors may see over the horizon : TOPMAST
2 Joint pain from playing too many video games : WIIITIS
3 Laundry leftover : ONE SOCK
4 Old Scandinavian poets : SKALDS
5 Refuses to cool down : STAYS MAD
6 World-weary exclamation : OH ME!
7 Big name in handbags : DIOR
8 Masterwork in philology, for short : OED
9 Healthful bowlful for breakfast : MUESLI
10 “Everything’s fouled up” : IT’S A MESS
11 Helps in getting out of jail : BAILORS
12 ___ report : EXPENSE
13 Article of apparel for a jam band : TIE-DYE
18 Fellow at a pub : LAD
22 Old World animals sometimes called toddy cats : CIVETS
24 After a long wait : AT LAST
27 Footloose? : UNSHOD
28 Make public : LET ON
30 Can opener? : PAROLE
32 Long-haired cat with sapphire-blue eyes : BALINESE
33 Put back into the market : REINVEST
34 “Try it!” : HAVE ONE!
35 Whopped on the head : BRAINED
37 It’s a put-on : COSTUME
38 Dispositions : NATURES
39 Rogue and Armada : NISSANS
40 First woman to win a Grammy for Best Rap Album as a solo artist : CARDI B
41 Bikes : PEDALS
42 Rational : MENTAL
45 Perfect representation : TEN
47 Figure in some hymns : JESU
48 Pacific island that’s also the name of part of the body : UVEA
51 Brasserie entrée : COQ