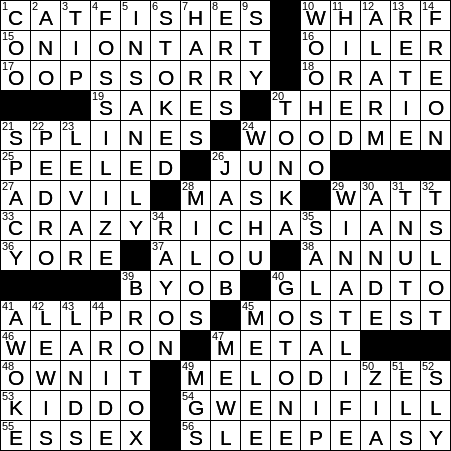 Constructed by: Wyna Liu
Edited by: Will Shortz

The Houston Oilers were an AFL charter team, founded in 1960. The team moved to Tennessee in 1997, and became the Tennessee Titans in 1999.

20 World Series of Poker venue in Las Vegas : THE RIO

Juno was the patron goddess of Rome and the Roman Empire, and also looked after the interests of the women of Rome. Juno was the sister and wife of Jupiter, the king of the Roman gods.

There are four counties named Essex in the northeast of the US:

7 Animals whose fur may change color in the winter : HARES

Hares belong to the genus Lepus, and young hares under one-year-old are called leverets.

14 Gas once used in aerosols : FREON

20 Toy company whose name comes from the Dakota Sioux word for “big” : TONKA

28 Greek island where a famous armless statue was found : MILOS

Milos is a one the Cyclades group of Greek islands. Famously, the statue of Aphrodite that can been seen in the Louvre was discovered on the island in 1820. The more famous name for the statue, “Venus de Milo”, is a reference to the island of Milos.

The A&E television network used to be a favorite of mine, with the “A&E” standing for “arts and entertainment”. A&E started out airing a lot of the old classic dramas, as well as biographies and arts programs. Now there seems to be more reality TV, with one of the flagship programs being “Dog the Bounty Hunter”. A slight change of direction I’d say …

Got one, I snagged a fish!

An imbroglio is difficult or tangled situation. As one might expect, “imbroglio” comes to us from Italian. The Old Italian word “imbrogliare” means to tangle or confuse.