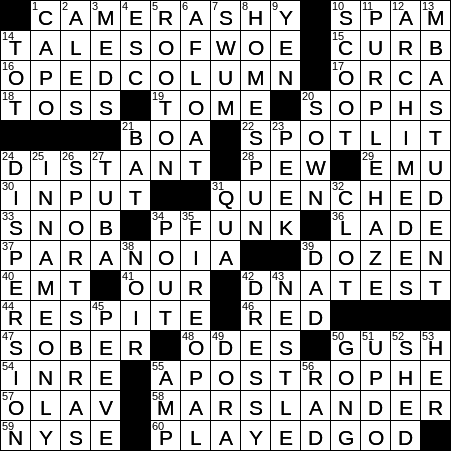 Constructed by: Jim Horne & Jeff Chen
Edited by: Will Shortz

28. Something shared by churchgoers : PEW

33. One quick to pass judgment : SNOB

23andMe was the first company to offer direct-to-consumer genetic testing, doing so in 2007. Initially, 23andMe offered a test that determined a subject’s predisposition to a list of specific genetic traits, including baldness and blindness. The company now offers a cost-effective ancestry DNA test as well.

55. Character in “All’s Well That Ends Well” and “A Midsummer Night’s Dream” : APOSTROPHE

Of the many kings of Norway named Olaf/Olav (and there have been five), Olaf II is perhaps the most celebrated, as he was canonized and made patron saint of the country. Olaf II was king from 1015 to 1028 and was known as “Olaf the Big” (or “Olaf the Fat”) during his reign. Today he is more commonly referred to as “Olaf the Holy”. After Olaf died he was given the title of “Rex Perpetuus Norvegiae”, which is Latin for “Norway’s Eternal King”.

NASA’s InSight mission is a robotic lander that made it Mars in late 2018. The acronym InSight stands for “Interior Exploration using Seismic Investigations, Geodesy and Heat Transport”, which reflects the use of the lander as a geophysical monitoring station.

Archimedes of Syracuse was a mathematician and scientist in ancient Greece. He contributed in many areas of physics, astronomy and mathematics, but is perhaps best known by us mere mortals for developing Archimedes’ principle. His discovery was that the upward buoyant force that is exerted on a body immersed in a fluid, whether fully or partially submerged, is equal to the weight of the fluid that the body displaces. The story is that Archimedes came up with principle while stepping in or out of a bath, and famously uttered “Eureka!”, meaning “I have found it!”.

“Qua” is a preposition meaning “in the capacity of”. “Qua” is a form of the Latin word for “who”.

The company that made Fender electric guitars was founded in Fullerton, California in 1946 by Leo Fender.