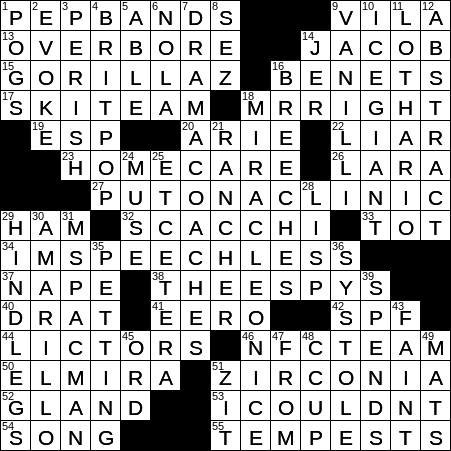 “This Old House” first aired in 1979, on PBS, with Bob Vila as host. After ten years on the show, Vila was able to make extra income with commercial endorsements. These earnings caused conflict with commercial-free PBS, and so Vila was replaced by Steve Thomas.

Extrasensory perception (ESP) might be considered the sixth of the five senses.

Greta Scacchi is an actress from Italy who now lives in Australia. Scacchi is popular on the European movie circuit as she is fluent in English, German , French and Italian.

Eero Saarinen was a Finnish-American architect who was renowned in this country for his unique designs for public buildings such as Gateway Arch in St. Louis, Dulles International Airport Terminal, and the TWA building at JFK. The list of his lesser-known, but still impressive, works includes several buildings erected on academic campuses. For example, the Chapel and Kresge Auditorium on the MIT campus, the Emma Hartman Noyes House at Vassar College, the Law School building at the University of Chicago, and Yale’s David S. Ingalls Rink.

The city of New Orleans, Louisiana has the nickname “The Big Easy”. This name might come from the early 1900s when musicians found it relatively “easy” to find work there. The city is also known by the acronym NOLA, standing for New Orleans (NO), LA.

The oldest neighborhood in the city of New Orleans is the French Quarter, which is also called the “Vieux Carré (French for “Old Square”). After being founded by the French in 1718 as “La Nouvelle-Orléans”, the city developed around this central square.

There is a character named Lothario in Don Quixote, and in the “Fair Penitent”, a 1703 play by Nicholas Rowe. In both cases the Lothario in question exhibits less than wholesome behavior towards a woman, giving rise to the term “lothario” meaning “roue”.

18. Sports Illustrated named it #1 in its “100 Greatest Moments in Sports History” : MIRACLE ON ICE

Amarillo in the Texas panhandle is known as “The Yellow Rose of Texas” because Amarillo is the Spanish for “yellow”. The city was originally called Oneida.

In the heart, the term “systole” describes the rhythmic contraction of the ventricles to pump the blood around the body.