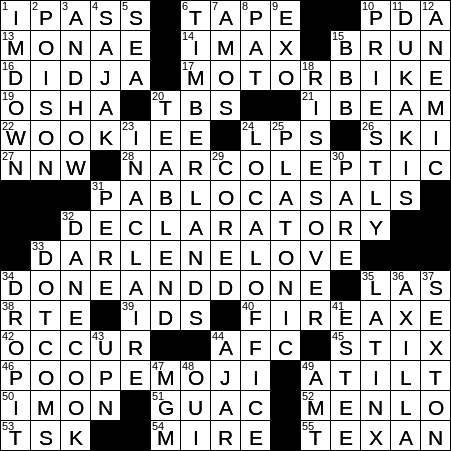 In French, the “couleur du chocolat” (color of chocolate) is “brun” (brown).

Dangerous goods are commonly referred to as hazardous materials, or “Hazmat”. People working with dangerous goods might wear a Hazmat suit.

24 Contents of some sleeves : LPS

31 Cellist with a Presidential Medal of Freedom : PABLO CASALS

Pablo Casals was a wonderful cellist from Catalonia in Spain. He lived at the time of the Franco regime in Spain. As a supporter of the Spanish Republican Government, he placed himself in self-imposed exile in 1938, vowing not to return home until democracy had been restored. Casals never again set foot on Spanish soil, and died in Puerto Rico in 1973.

2 One of the nine weapons in 2008’s expanded version of Clue : POISON

The phrase “in spades” meaning “in abundance” dates back to the late twenties. The term probably comes from the game of bridge, in which spades are the highest-ranking suit.

6 Footwear with a tree logo : TIMBERLANDS

7 Who said “The Lord will roar from Zion, and utter his voice from Jerusalem” : AMOS

Pat Sajak took over as host of “Wheel of Fortune” from Chuck Woolery back in 1983 and has been doing the job ever since. Sajak had a short run as a talk show host in 1989/1990 and used to sub quite often for Larry King and Regis Philbin.

Michael Dukakis was the Democratic nominee for president in 1988, losing out to President George H. Bush. Dukakis was born in Brookline, Massachusetts, the same town in which President John F. Kennedy came into the world.

25 Close … but not THAT close : PLATONIC

Dane Cook is a stand-up comedian who has had a number of roles in movies as well. He had a setback handling the income he was earning from his work though back in 2008. His half-brother had been his business manager up to that point and it was discovered that he had embezzled millions of dollars from Dane. The half-brother and his wife are now in prison for the crime.

35 Many a Univision viewer, in modern usage : LATINX

Univision is a Spanish-language television broadcaster based in New York City, with production facilities in Doral, Florida.

Anne Sexton was a poet from Massachusetts who won the 1967 Pulitzer for poetry for her collection titled “Live or Die”. Sexton’s style of poetry is sometimes classified as “confessional”, and reveals details of her private life, including her battle with depression. She finally committed suicide in 1974 at the age of 45.