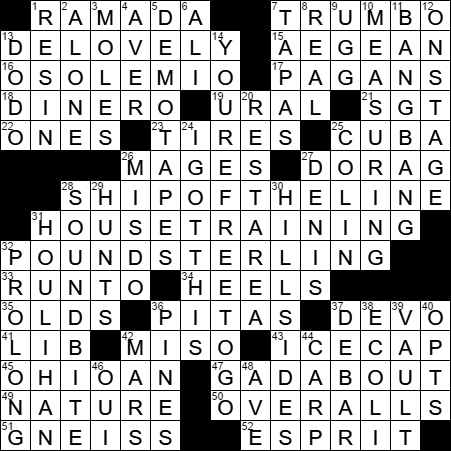 Today’s Wiki-est, Amazonian Googlies
Across
1. Radisson rival : RAMADA
The Ramada Inn hotel chain takes its name from the Spanish word for a shady resting place. A ramada is a shelter with a roof and no walls, mainly found in the American southwest. Nowadays a ramada can be temporary or permanent, but originally ramadas were makeshift shelters constructed by aboriginal Indians from branches or bushes.

7. Title role for Bryan Cranston in a 2015 biopic : TRUMBO
Dalton Trumbo was an American novelist and screenwriter, and one of the famous “Hollywood Ten” film professionals who testified in front of the House Un-American Activities Committee in 1947. Trumbo refused to give information to the committee and was found in contempt, and served 11 months in prison. Trumbo had his anti-war novel “Johnny Got His Gun” published in 1938. He also directed a film adaption that was released in 1971 that starred Timothy Bottoms.

13. Neologism coined by Cole Porter : DE-LOVELY
“It’s De-Lovely” is a song from the 1936 Cole Porter musical “Red Hot and Blue”, although the song was “recycled” for the later musical “Anything Goes”. It’s a great song, “de-lightful”, “de-licious”, “de-lovely” in fact …

A “neologism” is a new word or phrase, or a new meaning or usage for an existing word.

15. Sea that Homer called “wine-dark” : AEGEAN
The Aegean Sea is that part of the Mediterranean that lies between Greece and Turkey. Within the Aegean Sea are found the Aegean Islands, a group that includes Crete and Rhodes.

16. Song whose opening lyric translates to “What a beautiful thing is a sunny day” : ‘O SOLE MIO
“‘O sole mio” is a famous Italian song from Naples, written in 1898. The song’s lyrics are usually sung in the original Neapolitan, as opposed to Italian. The title translates from Neapolitan into “My Sun” (and not into “O, My Sun” as one might expect). It’s a love song of course, sung by a young man declaring that there is a sun brighter than that in the sky, the sun that is his lover’s face. Awww …

17. Missionaries’ targets : PAGANS
A pagan is someone who holds religious beliefs that are different from the main religions of the world. In classical Latin “paganus” was a villager, a rustic.

18. Scratch : DINERO
“Dinero” is the Spanish word for money, as well as a slang term for money here in the US.

19. River bisecting Orsk : URAL
The Ural River rises in the Ural Mountains in Russia and flows for half its length through Russian territory until it crosses the border into Kazakhstan, finally emptying into the Caspian Sea.

The city of Orsk is located about 60 miles southeast of the southern tip of the Ural Mountains in Russia. The city lies on the Ural River, which forms the boundary between Europe and Asia. As a result, Orsk can be considered as lying in two continents. Orsk also lies where the Or River joins the Ural, and so the Or gives the city its name.

26. Necromancers : MAGES
“Mage” is an archaic word for a magician.

27. Crown cover : DO-RAG
Hip-hoppers might wear do-rags today, but they have been around for centuries. If you recall the famous image of Rosie the Riveter, she was wearing a do-rag. The etymology is pretty evident, a piece of cloth (rag) to hold a hairstyle (do) in place.

28. Part of an armada : SHIP OF THE LINE
The most famous Armada was the Spanish fleet that sailed against England in order to overthrow Queen Elizabeth I in 1588. It failed in its mission, partly due to bad weather encountered en route. Ironically, the English mounted a similar naval attack against Spain the following year, and it failed as well.

32. World’s oldest currency still in use : POUND STERLING
The official name of the currency of the UK is the pound sterling (plural “pounds sterling”). The most plausible suggestion for the etymology of the term “sterling” is that it derives from the Old English “steorra” meaning “star”, with the diminutive “-ling”. The resulting “little star” or “sterling” referred to a silver penny used by the English Normans. The pound sterling is the world’s oldest currency still in use.

35. Early automotive pioneer : OLDS
The REO Motor Company was founded by Ransom Eli Olds (hence the name REO). The company made cars, trucks and buses, and was in business from 1905 to 1975 in Lansing, Michigan. Among the company’s most famous models were the REO Royale and the REO Flying Cloud.

37. Musical group with “energy domes” : DEVO
Devo is a band from Akron, Ohio formed back in 1973. The band’s biggest hit is “Whip It” released in 1980. Devo have a gimmick: the wearing of red, terraced plastic hats that are referred to as “energy domes”. Why? I have no idea …

42. ___ soup : MISO
Miso is the name of the seasoning that makes the soup. Basic miso seasoning is made by fermenting rice, barley and soybeans with salt and a fungus to produce a paste. The paste can be added to stock to make miso soup, or perhaps to flavor tofu.

45. LeBron James, by birth : OHIOAN
Basketball player LeBron James (nicknamed “King James”) seems to be in demand for the covers of magazines. James became the first African American man to adorn the front cover of “Vogue” in March 2008. That made him only the third male to make the “Vogue” cover, following Richard Gere and George Clooney.

47. Restless sort : GAD ABOUT
“To gad about” is to move around with little purpose. The word “gad” comes from the Middle English “gadden” meaning “to hurry”.

49. “She understands her business better than we do,” per Montaigne : NATURE
Michel de Montaigne was a prominent writer of the French Renaissance, and is noted for making popular the essay (“essai” in French) as a legitimate genre of literature.

51. Banded metamorphic rock : GNEISS
Gneiss is a metamorphic rock containing bands of different colors and compositions. The term “gneiss” comes from the Middle High German “gneist” meaning “to spark”, which is a reference to the rock’s tendency to glitter.

52. Lively wit : ESPRIT
Our word “esprit”, meaning “liveliness of mind”, comes to us from Latin via French. The Latin “spiritus” means “spirit

Down
1. Substance used in Egyptian mummification : RESIN
We use the word “mummy” for a dead body that has been embalmed in preparation for burial, especially if done so by the ancient Egyptians. The term “mummy” comes from the Persian word “mumiyah” meaning “embalmed body”.

3. Earthworm trappers : MOLES
One of the more commonly known facts about my native Ireland is that there are no snakes in the country (outside of politics, that is). A less known fact is that there are no moles either. There are plenty of snakes and moles in Britain, just a few miles away. Over a pint we tend to give the credit to Saint Patrick, but the last ice age is more likely the responsible party …

6. Who said “I’m so mean I make medicine sick” : ALI
The boxer Cassius Marcellus Clay, Jr. was born in 1942 in Louisville, Kentucky. Clay changed his name to Muhammad Ali when he converted to Islam in 1964. Who can forget Muhammad Ali lighting the Olympic flame for the 1996 games in Atlanta?

7. Cantina offerings : TAPAS
“Tapa” is the Spanish word for “lid”, and there is no clear rationale for why this word came to be used for an appetizer. There are lots of explanations cited, all of which seem to involve the temporary covering of one’s glass of wine with a plate or item of food to either preserve the wine or give one extra space at the table.

9. ___ boots : UGG
Uggs are sheepskin boots that were first produced in Australia and New Zealand. The original Uggs have sheepskin fleece on the inside for comfort and insulation, with a tanned leather surface on the outside for durability. Ugg is a generic term Down Under, although it’s a brand name here in the US.

13. Dummkopf : DODO
“Dummkopf” is a German word that translates literally as “dumb head”.

25. Firth of “The King’s Speech” : COLIN
Colin Firth is an English actor who came to prominence playing Mr Darcy in the fabulous television adaptation of Jane Austen’s “Pride and Prejudice” that came out in 1995 (I cannot recommend that six-episode drama enough). More recently, Firth won the Best Actor Oscar for playing King George VI in “The King’s Speech”.

27. France’s patron saint : DENIS
Not only is Saint Denis (also “Denys”) the patron saint of France, but he is also the patron saint of Paris. Denis was the first Bishop of Paris, in the 3rd century AD, and was martyred by having his head chopped off. The legend surrounding this event is that the executed Denis picked up his head and walked for six miles, delivering a sermon the whole way.

31. Surname of TV’s “Hot Lips” : HOULIHAN
Loretta Swit started playing “Hot Lips” Houlihan on “M*A*S*H” in 1972. She and Alan Alda were the only actors who appeared in both the pilot and the series finale. Swit has written a book on needlepoint, would you believe? It’s called “A Needlepoint Scrapbook”.

36. Seven ___ (Civil War battle site) : PINES
The Battle of Seven Pines is also known as the Battle of Fair Oaks, and took place during the Civil War in the middle of 1862.

38. Things that take guts? : E COLI
Escherichia coli (E. coli) are usually harmless bacteria found in the human gut, working away quite happily. However, there are some strains that can produce lethal toxins. These strains can make their way into the food chain from animal fecal matter that comes into contact with food designated for human consumption.

42. Opportunity’s on it : MARS
There have been several rovers sent to Mars from Earth. The Soviet Union’s Mars 2 landed in 1971, and failed. Mars 3 landed the same year, and ceased operation just 20 seconds after landing. NASA’s Sojourner landed in 1997 (what a great day that was!) and operated from July through September. The British rover Beagle 2 was lost six days before its scheduled entry into the Martian atmosphere. NASA’s Spirit landed in 2004, and operated successful for over six years before getting trapped in sand and eventually ceasing to communicate. NASA’s Opportunity also landed in 2004, and it is still going. And then NASA’s Curiosity made a spectacular, hi-tech landing in 2012 and is continuing to explore the planet today.