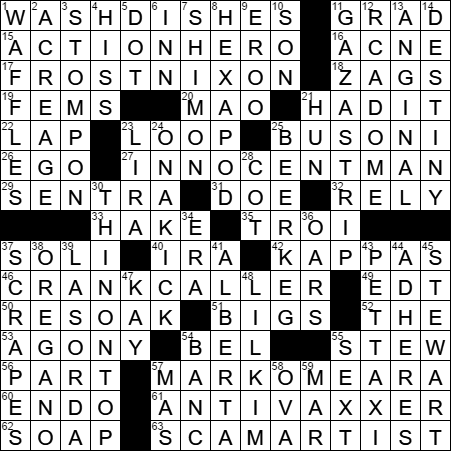 Today’s Wiki-est, Amazonian Googlies
Across
1. Be on K.P., in a way : WASH DISHES
KP is a US military slang term that stands for either “kitchen police” or “kitchen patrol”.

15. Sly depiction, often : ACTION HERO
If ever there was a movie that defines a career breakthrough for an actor, it would have to be “Rocky” for Sylvester Stallone. Stallone was a struggling actor in 1975 when a Muhammad Ali fight inspired Stallone to write a screenplay for a boxing movie, which he did in just three days. His efforts to sell the script went well but for the fact that the interested studios wanted a big name for the lead role, and Stallone was determined to be the star himself. Stallone persevered and “Rocky” was eventually made with him playing title role of Rocky Balboa. The movie won three Oscars, and “Sly” Stallone had arrived …

17. Play and movie about a noted 1977 series of interviews : FROST/NIXON
The British journalist David Frost is perhaps best known in the US for hosting the television show “Through the Keyhole” and for his celebrity interviews, most notably with former President Richard Nixon. That interview was adapted as a play and then a movie called “Frost/Nixon”. The movie was directed by Ron Howard. “Frost/Nixon” is a little slow, but it is a must see for political history addicts like me.

19. Partners in many lesbian couples : FEMS
Lesbos is a Greek island in the northeast of the Aegean Sea. The Greek poet Sappho came from Lesbos, and she was a woman noted for her powerful emotional poems directed towards other females. It is because of the writings of Sappho from Lesbos that we have our word “lesbian”.

27. 1983 7x platinum Billy Joel album, with “An” : INNOCENT MAN
Billy Joel is the third-best selling solo artist in the US, after Elvis Presley and Garth Brooks. Joel’s name has been associated with two supermodels in his life. He dated Elle Macpherson, and wrote two songs about their relationship: “This Night” and “And So It Goes”. Joel’s second wife was Christie Brinkley, to whom he was married from 1985 to 1994. Brinkley appeared in the title role in the music video for “Uptown Girl”.

29. Japanese import that debuted in 1982 : SENTRA
The Nissan Sentra is sold as the Nissan Sunny back in Japan.

31. John in a suit? : DOE
Though the English court system does not use the term today, John Doe first appeared as the “name of a person unknown” in England in 1659, along with another unknown, Richard Roe. An unknown female is referred to as Jane Doe. Variants of “John Doe” are “Joe Blow” and “John Q. Public”.

33. Marine fish related to the cod : HAKE
Hake is a commonly eaten fish in Europe, with half of all the hake consumed in Spain.

35. “Star Trek: T.N.G.” counselor : TROI
Deanna Troi is a character on “Star Trek: The Next Generation” who is played by the lovely Marina Sirtis. Sirtis is a naturalized American citizen and has what I would call a soft American accent on the show. However, she was born in the East End of London and has a natural accent off-stage that is more like that of a true Cockney.

37. They’re not complex numbers : SOLI
“Soli” (the plural of “solo”) are pieces of music performed by one artist, whereas “tutti” are pieces performed by all of the artists.

46. One asking for Ahmed Adoudi, say : CRANK CALLER
“Ahemed Adoudi” sounds like “I made a doody”.

54. Acoustics unit : BEL
In the world of acoustics, one bel is equal to ten decibels.

57. Winner of the 1998 Masters and British Open : MARK O’MEARA
Mark O’Meara is an American golfer from Goldsboro, North Carolina. He is known as one of the American players who competes in international tournaments more than most, and has a reputation as a real gentleman all around the world.

61. One who won’t give kids a shot? : ANTI-VAXXER
“Anti-vaxxers” is a term that applies to members of the anti-vaccination movement.

Down
5. Feature of only two letters : DOT
They would be the lowercase letters “i” and “j”.

7. President Peres : SHIMON
Shimon Peres was an Israeli statesman who was born in Poland, in a township that is now part of Belarus. Peres served as President of the State of Israel from 2007 to 2014. Born Szymon Perski, Peres was the oldest head of state in the world while he served as president of Israel. While serving as foreign minister, he represented Israel in the secret negotiations that led to the signing of the Oslo Accords in 1993. For that work, Peres was jointly awarded the Nobel Peace Prize with Yitzhak Rabin and Yasser Arafat.

11. Intifada locale : GAZA STRIP
After the 1948 Arab-Israeli War, the boundaries of the strip of land on the Mediterranean around Gaza were fixed in the Israel-Egypt Armistice Agreement. The boundaries were specifically defined but were not to be recognized as an international border. From 1948, the Gaza Strip was occupied and administered by Egypt, until 1967 when Israel took over occupation following the Six-Day War. In 1993, Israel and the PLO signed the Oslo Accords which handed over administration to the Palestinian Authority, but with Israel retaining control of the Gaza Strip’s airspace, some land borders and its territorial waters. The intent was to further this agreement, but discussions between the parties broke down. Israel withdrew from Gaza in 2005.

12. Former home of the Colts : RCA DOME
The RCA Dome was probably better known as the Hoosier dome, home to the Indianapolis Colts from 1984-2007. It was torn down in 2008, but the inflated roof was put to good use afterwards. The material was re-purposed by local artisans, creating wallets, messenger bags etc. These can still be purchased, with proceeds going to charity.

13. Like some chest pain : ANGINAL
“Angina pectoris” is the more complete name for the chest pain that we usually refer to as “angina”. The term can be translated into English as “a strangling feeling in the chest”.

21. Vandal : HUN
The Huns were a nomadic people who originated in Eastern Europe in the 4th century. Under the command of Attila the Hun they developed a unified empire that stretched from modern-day Germany across to the steppes of Central Asia. The whole of the Hunnic Empire collapsed within a year of Attila’s death in 453 AD.

A “vandal” is someone who destroys something beautiful or valuable. The term comes from the Germanic tribe called the Vandals who sacked Rome in the year 455. Our contemporary term “vandalism” was coined by Henri Grégoire in 1794, when he was describing the destruction of artwork during the French Revolution.

23. Italian bread that’s become toast? : LIRA
The word “lira” is used in a number of countries for currency. “Lira” comes from the Latin for “pound” and is derived from a British pound sterling, the value of a Troy pound of silver. For example, the lira (plural “lire”) was the official currency of Italy before the country changed over to the euro in 2002.

38. Herb of PBS’s “Ciao Italia” : OREGANO
Oregano is a perennial herb that is in the mint family. Also known as wild marjoram, oregano is very much associated with the cuisine of southern Italy. Oregano’s popularity surged in the US when soldiers returning from WWII in Europe brought with them an affinity for what they called “the pizza herb”.

39. 1981 and 1988 World Series-winning manager : LASORDA
Tommy Lasorda had been with the Brooklyn/Los Angeles Dodgers for over sixty years when he retired in 1996 (although he did spend one season playing with the Kansas City Athletics).

41. 1988 Olympics locale : ALBERTA
Alberta (Alta.) is a big province, about the size of Texas. Alberta is named after Princess Louise Caroline Alberta, the fourth child of Queen Victoria and Prince Albert. Princess Louise also donated her name to Lake Louise, the large glacial lake in the province, now within the bounds of Banff National Park.

45. Noah’s predecessor : STEWART
Comedian Jon Stewart is best known for hosting “The Daily Show” from 1999 until 2015. Stewart is a fan of crosswords. He proposed to his girlfriend and future wife in a personalized crossword that was created with the help of crossword editor Will Shortz.

47. Eloise creator Thompson : KAY
Kay Thompson wrote the “Eloise” series of children’s books. Kay Thompson actually lived at the Plaza Hotel in New York, the setting she would choose for her “Eloise” stories. Eloise started out as a hit song for Thompson, a success that she parlayed into the book franchise.

48. Rapper with the debut album “Hard Core” : LIL’ KIM
Lil’ Kim is the stage name of rap artist Kimberly Denise Jones from Brooklyn, New York. Lil’ Kim spent a year in jail in 2005 for lying to a jury in a case about a shooting.

55. Suggestive transmission : SEXT
“Sexting” (a portmanteau of “sex” and “texting”) is the sending of explicit dialog and images between cell phones. The term “sexting” was first coined by the UK’s “Sunday Telegraph Magazine” in a 2005 article. Apparently the practice is “rampant” among teens and young adults. Whatever happened to dinner and a movie …?

57. What’s more in Madrid? : MAS
Madrid is the largest city in Spain and the capital. Madrid is located very close to the geographical center of the country. It is the third-largest city in the European Union (after London and Paris). People from Madrid called themselves Madrileños.