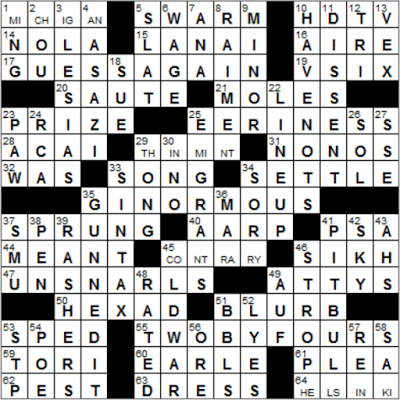 CROSSWORD SETTER: Howard Barkin
THEME: April Fooled by Two-By-Fours
We’ve been fooled with today’s puzzle, in more ways than one. Instead of the expected themeless Saturday, we have a rebus puzzle. Also, four answers that look like “gimmes” on any other day, and are actually the unexpected rebus answers. Those rebus answers each comprise FOUR squares with TWO letters in each:

31A. Taking things for granted on April Fools’ Day and others : NO-NOS
55A. Construction staples … or a hint to this puzzle’s theme : TWO-BY-FOURS

1A. One of the Great Lakes : MICHIGAN (and not ERIE)
29A. Popular cookie : THIN MINT (and not OREO)
45A. In opposition : CONTRARY (and not ANTI)
64A. Scandinavian capital : HELSINKI (and not OSLO)

Today’s Wiki-est, Amazonian Googlies
Across
1. One of the Great Lakes : MICHIGAN (and not ERIE)
Of the five Great Lakes, Lake Michigan is the only one that is located totally within the US, the others being shared by the US and Canada.

14. Saint’s home, for short : NOLA
The city of New Orleans, Louisiana has the nickname “The Big Easy”. This name might come from the early 1900s when musicians found it relatively “easy” to find work there. The city is also known by the acronym NOLA, standing for New Orleans (NO), LA.

The New Orleans Saints football team takes its name from the jazz song “When the Saints Go Marching In”, a tune that is very much associated with the city. The team was founded in 1967, on November 1, which is All Saints’ Day in the Roman Catholic tradition.

15. Place for a barbecue : LANAI
A lanai is a type of veranda, a design that originated in Hawaii. A kind blog reader tells me that the etymology of “lanai” seems unclear, but that the island name of “Lana’i” is not related.

20. Brown : SAUTE
“Sauté” is a French word. The literal translation from the French is “jumped” or “bounced”, a reference to the tossing of food while cooking it in a frying pan.

28. Smoothie fruit : ACAI
Açaí is a palm tree native to Central and South America. The fruit has become very popular in recent years and its juice is a very fashionable addition to juice mixes and smoothies.

31. Taking things for granted on April Fools’ Day and others : NO-NOS
April Fools’ Day is celebrated on April 1st in the western world. In the US (and Ireland) one can make practical jokes all day long if one wants. But in the UK there is a noon deadline. Anyone pranking after midday is called an “April Fool”.

40. Powerful D.C. lobby : AARP
AARP is now the official name for the interest group that used to be called the American Association of Retired Persons. The name change reflects the current focus of the group on all Americans aged 50 or over, as opposed to just people who have retired.

A business is sometimes called a “firm”. “Firm” comes into English from Latin via the Italian “firma” meaning signature. The concept is that business transactions are confirmed, made firm, by applying a signature.

59. Famous Amos : TORI
Tori Amos is an American pianist and singer. Amos started playing the piano at two years old, and was composing piano pieces by age five. She was playing in piano bars (chaperoned by her father) when she was 14. I’m going to have to find some of her music (I lead such a sheltered life …)!

60. Rocker Steve : EARLE
Steve Earle is an American songwriter and performer, with a reputation as a man who has lived a hard life. Earle’s brushes with the law and drug addiction problems have earned him the nickname “the hardcore troubadour”.

64. Scandinavian capital : HELSINKI (and not OSLO)
Helsinki is the capital city of Finland, and is by far the country’s biggest urban area. In English we tend to stress the “-sink-” in “Helsinki”, whereas the Finns stress the “Hel-”.

Down
1. Vase style : MING
The Ming Dynasty lasted in China from 1368 to 1644. The Ming Dynasty oversaw tremendous innovation in so many areas, including the manufacture of ceramics. Late in the Ming period, a shift towards a market economy in China led to the export of porcelain on an unprecedented scale, perhaps explaining why we tend to hear more about Ming vases than we do about porcelain from any other Chinese dynasty.

2. Compatriot of Mao : CHOU
Zhou Enlai (also “Chou En-Lai”) was the first government leader of the People’s Republic of China and held the office of Premier from 1949 until he died in 1976. Zhou Enlai ran the government for Communist Party Leader Mao Zedong, often striking a more conciliatory tone with the West than that of his boss. He was instrumental, for example, in setting up President Nixon’s famous visit to China in 1972. Zhou Enlai died just a few months before Mao Zedong, with both deaths leading to unrest and a dramatic change in political direction for the country.

7. Major Asian carrier : ANA
All Nippon Airways (ANA) is a Japanese airline, second in size only to Japan Airlines (JAL).

9. Like melancholy musical keys : MINOR
Experts, unlike me, can wax lyrical on the technical differences between major and minor keys and scales. To me, music written in major keys is very strident, often very joyful and “honest”. Music written in minor keys (usually my favorite) is more feminine, more delicate and often quite sad.

24. Big letters in electronics : RCA
During WWI, the US government actively discouraged the loss of certain technologies to other countries, including allies. The developing wireless technologies were considered to be particularly important by the army and navy. The government prevented the General Electric Company from selling equipment to the British Marconi Company, and instead facilitated the purchase by GE of the American Marconi subsidiary. This purchase led to GE forming the Radio Corporation of America that we know today as RCA.

36. Actress Wilson of “Mrs. Doubtfire” : MARA
The 1993 comedy “Mrs. Doubtfire” is based on a 1987 novel called “Madame Doubtfire” by Anne Fine. The movie is set and was filmed in San Francisco. The title role is played by Robin Williams, who spent most of the movie dressed as the female Mrs. Doubtfire. Perhaps unsurprisingly, the movie won the Oscar for Best Makeup.

38. Corral : PEN
“Corral” is the Spanish word for an enclosure for livestock, and is a word we’ve imported into English. Ultimately, the term comes from the Vulgar Latin “currale” meaning “enclosure for carts”, itself coming from “currus”, the Latin for “cart”.

39. Strips at breakfast : RASHERS
What we tend to call “Canadian bacon” in the US, we know as “rashers” on the other side of the Atlantic. One of my uncles worked in the meat trade in Dublin, and his nickname was “Rasher”.

45. Milieu of the FX series “The Americans” : COLD WAR
The term “Cold War” was first used by the novelist George Orwell in a 1945 essay about the atomic bomb. Orwell described a world under threat of nuclear war as having a “peace that is no peace”, in a permanent state of “cold war”. The specific use of “cold war” to describe the tension between the Eastern bloc and the Western allies is attributed to a 1947 speech by Bernard Baruch, adviser to Presidents Woodrow Wilson and Franklin D. Roosevelt.

We use the French term “milieu” to mean an environment, surroundings. In French, “milieu” is the word for “middle”.

46. Poetic stanza : STROPHE
In general terms, in poetry a “strophe” is a pair of stanzas with alternating form. So, a poem might be made up from a number of strophes, and twice that number of stanzas.

51. Oil qtys. : BBLS
The volume of one oil barrel is equivalent to 42 US gallons. A barrel is correctly abbreviated to “bbl”. Barrels aren’t really used for transporting crude oil anymore. Instead, oil moves in bulk through pipelines and in tankers. “Barrel” is just a quantity these days.

52. They burn : LYES
What we call “lye” is usually sodium hydroxide, although historically the term was used for potassium hydroxide. Lye has many uses, including to cure several foodstuffs. Lye can make olives less bitter, for example. The chemical is also found in canned mandarin oranges, pretzels and Japanese ramen noodles. More concentrated grades of lye are used to clear drains and clean ovens. Scary …

54. Author who wrote “I became insane, with long intervals of horrible sanity” : POE
Edgar Allan Poe lived a life of many firsts. Poe is considered to be the inventor of the detective-fiction genre. He was also the first notable American author to make his living through his writing, something that didn’t really go too well for him as he was always financially strapped. In 1849 he was found on the streets of Baltimore, delirious from either drugs or alcohol. Poe died a few days later in hospital at 39 years of age.

58. Noted pseudonym in short story writing : SAKI
Hector Hugh Munro was a British writer who actually was born in Burma. He was most famous for his short stories, which he published using the pen name “Saki”. “The Square Egg and Other Sketches” was a collection of short stories published in 1924, nine years after his death.