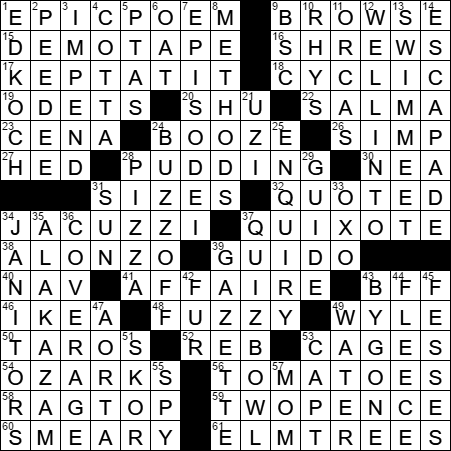 Today’s Wiki-est, Amazonian Googlies
Across
1. “Don Juan,” for one : EPIC POEM
Lord Byron wrote the poem “Don Juan” based on the legend of Don Juan the libertine. In the poem, he created the character Donna Inez, Don Juan’s mother. Supposedly Inez was based on Byron’s own wife, Annabella Milbanke.

16. Mammals using echolocation : SHREWS
Shrews are mammals that look like small moles or long-nosed mice. They are the only terrestrial mammals that are known to echolocate, using a series of ultrasonic squeaks to examine their nearby surroundings.

22. Hayek of “Grown Ups” : SALMA
Salma Hayek is a Mexican actress. Hayek was the first Mexican national to be nominated for a Best Actress Oscar, for her portrayal of artist Frida Kahlo in the 2002 movie “Frida”.

“Grown Ups” is a 2010 comedy movie written by and starring Adam Sandler. The film revolves around five childhood friends who reunite after thirty years. Sandler plays one of the five, along with Kevin James, Chris Rock, David Spade and Rob Schneider.

26. Dunderhead : SIMP
“Simp” is slang for a simple or foolish person. Not nice …

27. Nancy Sinatra’s “If ___ Love Me” : HE’D
Singer Nancy Sinatra has a few big hits to her name, including 1966’s “These Boots Are Made for Walkin’”, 1967’s “Somethin’ Stupid”, and 1967’s “You Only Live Twice” (theme song for the movie). Nancy is the daughter of the great Frank Sinatra, who sang “Somethin’ Stupid” with her as a duet. Frank also passed on “You Only Live Twice” before the song was offered to Nancy.

28. Brown Betty, e.g. : PUDDING
Brown Betty is a simple dessert made from apples (usually) with sweetened crumbs on top, and then baked.

30. Org. with a campaign called “Degrees Not Debt” : NEA
The National Education Association (NEA) is the largest labor union in the country, and mainly represents public school teachers.

34. Jet stream locale : JACUZZI
Jacuzzi is one of those brand names that has become so much associated with the product that it is often assumed to be a generic term. The Jacuzzi company was founded in 1915 by the seven(!) Jacuzzi brothers in Berkeley California. The brothers, who were Italian immigrants, pronounced their name “ja-coot-si”, as one might suspect when one realizes the name is of Italian origin. The company started off by making aircraft propellers and then small aircraft, but suspended aircraft production in 1925 when one the brothers was killed in one of their planes. The family then started making hydraulic pumps, and in 1948 developed a submersible bathtub pump so that a son of one of the brothers could enjoy hydrotherapy for his rheumatoid arthritis. The “hydrotherapy product” took off in the fifties with some astute marketing towards “worn-out housewives” and the use of celebrity spokesman Jack Benny.

37. Romantic visionary : QUIXOTE
The full name of Cervantes’s novel is “The Ingenious Hidalgo Don Quixote of La Mancha”. In the story, Don Quixote is a retired country gentleman who heads out as a knight-errant and who renames himself Don Quixote of la Mancha. In his mind he designates a neighboring farm girl called Aldonza Lorenzo as his lady love, and renames her Dulcinea del Toboso.

38. N.B.A. Hall-of-Famer Mourning : ALONZO
Basketball player Alonzo Mourning played most of his career with the Miami Heat, and in 2009 was the first person to have his number retired. In 2003, Mourning had a kidney replacement, a donation from a cousin that he had not seen in 25 years.

39. Oscar-winning role in “Life Is Beautiful” : GUIDO
Roberto Benigni is an Italian actor and director. Benigni had a major role in “Son of the Pink Panther” in which he played the illegitimate son of Inspector Clouseau played by Peter Sellers. The movie bombed in America, but made it big in Benigni’s native country of Italy. His most famous role in here in America is in the 1997 film “Life is Beautiful”, an Italian language film that won him the 1997 Oscar for Best Actor (and Benigni also directed the movie).

46. Many of its products have legs : IKEA
The furniture chain IKEA was founded by Ingvar Kamprad in 1943, when he was just 17-years-old. IKEA is an acronym standing for Ingvar Kamprad Elmtaryd Agunnaryd (don’t forget now!). Elmtaryd was the name of the farm where Ingvar Kamprad grew up, and Agunnaryd is his home parish in Sweden.

49. Noah of “Falling Skies” : WYLE
Noah Wyle is an actor noted for playing Dr. John Truman Carter III on television’s “ER”. He was highly valued by the show’s producers, earning about $400,000 per episode in 2005, a world record for an actor in a TV drama at that time.

50. Plants of the arum family : TAROS
The corm of some taro plants is used to make poi, the traditional Hawaiian dish (that I think tastes horrible). When a taro plant is grown as an ornamental, it is often called Elephant Ears due to the shape of its large leaves.

52. Ft. Sumter battler : REB
Fort Sumter is a fortification lying on an artificially constructed island in Charleston Harbor in South Carolina. In December 1860, when South Carolina seceded from the Union, US Army forces relocated to Fort Sumter deeming it to be a relatively defensible location. On 11 April 1861, confederate forces demanded that the fort be surrendered. When the defenders refused to budge, confederate artillery opened fire at 4:30 in the morning on 12 April 1861, starting the American Civil War.

54. Range that’s home to Ha Ha Tonka State Park : OZARKS
The Ozark Mountains aren’t really mountains geographically speaking, and the Ozarks are better described by the alternate name, the Ozark Plateau. It’s not really certain how the Ozarks got their name, but my favorite theory is that “Ozarks” is the phonetic spelling of “aux Arks”, short for “of Arkansas” in French.

56. Units in modern film ratings? : TOMATOES
“Rotten Tomatoes” is a website that mainly provides reviews and ratings of movies, although it now covers TV shows as well. The site was launched in 1998 and takes its name from the practice of audience members throwing rotten tomatoes at a unappreciated performer on stage.

2. Alphabetically rhyming river name : PEE DEE
The Pee Dee River takes its name from the Pee Dee tribe of Native Americans from the southeast of the United States.

6. Wild thing? : OAT
Traditionally, wild oats was a crop that one would regret sowing instead of “good grain”. Young and tempestuous people were rash enough to sow their wild oats, and had yet to comprehend their folly. Over time, to “feel one’s oats” came to mean “be lively and confident”.

8. Modi operandi : METHODS
“Modus operandi” (plural “modi operandi”) is the Latin for “mode of operating”, a term we’ve been using since the mid-1600s. It’s often used by the police when referring to the methods typically employed by a particular perpetrator of a crime, and is usually abbreviated to “M.O.”

10. Novelist Jean with the 1966 best seller “Wide Sargasso Sea” : RHYS
Wide Sargasso Sea” was written by Jean Rhys and first published in 1966. It’s a clever work, written as a sort of prequel to Charlotte Bronte’s famous “Jane Eyre”, which dates back to 1847.

21. AK-47 alternative : UZI
The first Uzi submachine gun was designed in the late 1940s by Major Uziel “Uzi” Gal of the Israel Defense Forces, who gave his name to the gun.

The AK-47 rifle is also known as the “Kalashnikov”, after the guns inventor Mikhail Kalashnikov. The AK-47 first saw service with the Soviet Army, starting in 1948.

33. Big name in kitchen utensils : OXO
The OXO line of kitchen utensils is designed to be ergonomically superior to the average kitchen too. The intended user of OXO products is someone who doesn’t have the normal range of motion or strength in the hands e.g. someone suffering from arthritis.

34. Cleanup crew : JANITORS
A janitor is someone who takes care of the maintenance or cleaning of a building. An older definition of the term is “doorman”. Our word comes from the Latin “ianitor” meaning “doorkeeper”.

39. Montreal daily : GAZETTE
“The Gazette” is an English-language daily newspaper published in Montreal. “The Gazette” was founded in 1778 and is actually the oldest newspaper in the province of Quebec.

45. Spills it, with “up” : FESSES
The term “fess” is most often seen as part of the phrasal verb “to fess up” meaning “to admit to something”. “Fess” is simply a shortened form of “confess”.

47. Trunk in the trunk : AORTA
The aorta originates in the heart and extends down into the abdomen. It is the largest artery in the body.

51. Hershey bar : SKOR
Skor is a candy bar produced by Hershey’s. “Skor” is Swedish for “shoes”, and the candy bar’s wrapping features a crown that is identical to that found in the Swedish national emblem. What “shoes” have to do with candy, I don’t know …