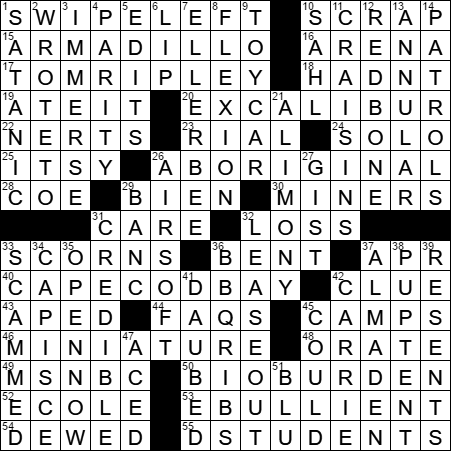 Today’s Wiki-est, Amazonian Googlies
Across
1. Reject someone, in a way : SWIPE LEFT
Many apps on phones are now using “swipe right” and “swipe left” actions to indicate “like” and dislike”. I suppose Tinder is the most famous “swipe right/swipe left” app today. It’s a dating app, so I hear …

15. Mammal that jumps vertically when startled : ARMADILLO
The nine-banded armadillo is the most commonly found species of armadillo found in the Americas. The “bands” are bits of armor that circle the body of the armadillo, although there are not always nine of them, but usually seven to eleven.

American novelist Patricia Highsmith was noted for her psychological thrillers, some of which were adapted for the big screen. For example, Alfred Hitchcock’s 1951 film “Strangers on a Train” was based on her 1950 novel of the same name. The more recent movie “The Talented Mr. Ripley” released in 1999 was adapted from her 1955 novel with the same title.

120. Vegas hotel with a name from English legend : EXCALIBUR
Excalibur is the legendary sword of the legendary King Arthur of Great Britain. In some accounts, Arthur was given the sword by the Lady of the Lake. There is sometimes confusion about the origin of Excalibur, as Arthur famously is said to have pulled a sword from a stone, hence proving him to be a true king. The Sword in the Stone is a different sword, and not Excalibur.

The Excalibur Hotel and Casino is a Medieval-themed resort. The exterior of the building is reminiscent of a castle, and there’s a famous dinner show featuring knights and horses called “Tournament of Kings”.

“Cheese and rice” is an exclamation, a euphemism for “Jesus Christ”. The expression was coined for the 1998 teen horror film “The Faculty”. After realizing that aliens had landed on Earth, a character utters the words “Jesus Christ!” This was changed to “Cheese and rice!” for the edited TV version.

26. Present from the start : ABORIGINAL
Even though the term “aborigine” is often associated with the indigenous peoples of Australia, in the widest sense “aboriginal” refers to any indigenous race. The Aborigines were a people in Roman mythology, the oldest inhabitants of central Italy.

28. Iowa college : COE
Coe College is a private school in Cedar Rapids, Iowa that was founded in 1851. Coe is affiliated with the Presbyterian Church.

29. First Indochina War’s Battle of Dien ___ Phu : BIEN
The Battle of Điện Biên Phủ was fought in Vietnam in 1954 at the height of the First Indochina War. The war was between the occupying French forces and the Viet Minh revolutionaries, with the battle resulting in a resounding defeat for the French. The war ended with the signing of the 1954 Geneva Accords just a few months after the battle, after which France made a complete withdrawal from Vietnam. There was no peace though, with the Second Indochina War following a few years later, better known in the US as the Vietnam War.

30. Ones taking a lode off? : MINERS
A lode is a metal ore deposit that’s found between two layers of rock or in a fissure. The “mother lode” is the principal deposit in a mine, usually of gold or silver. “Mother lode” is probably a translation of “veta madre”, an expression used in mining in Mexico.

40. Giovanni da Verrazano discovery of 1524 : CAPE COD BAY
Apparently, the oft-used “Verrazano” spelling is incorrect, and should be “Verrazzano”.

44. Users’ resources : FAQS
Most websites have a page listing answers to Frequently Asked Questions (FAQs). Even this blog has one!

48. Keynote, e.g. : ORATE
The “keynote” is the lowest note in a musical scale, as one might imagine. The term started to be used to mean a leading idea in the late 1700s, and the expression “keynote address” dates back to 1905.

49. Former employer of Keith Olbermann : MSNBC
Keith Olbermann is a sports and political commentator. Olbermann was exclusively a sports journalist for the first twenty years of his career, and spent several years presenting shows on ESPN. He left ESPN in 1997 to host his own prime-time, news-driven show on MSNBC.

52. ___ des Beaux-Arts : ECOLE
In France, an “École des Beaux-Arts” is a school of fine arts. The most famous such school is the École nationale supérieure des Beaux-Arts located on the left bank of the Seine in Paris, across the river from the Musée du Louvre.

53. Bubbling over : EBULLIENT
“Ebullient” means high-spirited, overflowing with enthusiasm. The term comes from the Latin “ebullire” meaning “to boil over”.

Down
7. Linda ___, “Girl Reporter” series author : ELLERBEE
Linda Ellerbee is a television journalist from Bryan, Texas who worked with NBC News. Ellerbee was also the host of “Nick News” on Nickelodeon.

9. Matchbox item : TOY CAR
The brand name Matchbox toy cars were introduced in 1953, and how I loved them growing up. They were called Matchbox cars because they were packed in boxes that looked liked regular matchboxes. The brand was English, but the name spread around the world. The brand was so popular that the term “matchbox car” came to mean any small, die-cast toy car, regardless of who made it.

10. Satirist who said “If you were the only person left on the planet, I would have to attack you. That’s my job” : SAHL
Mort Sahl is a Canadian-born actor and comedian who moved to the US with his family when he was a child. Sahl became friends with John F. Kennedy. When Kennedy became president, Sahl wrote a lot of jokes for the President’s speeches, although he also told a lot of Kennedy jokes in his acts. After the President was assassinated in 1963, Sahl was intensely interested in finding out who was behind the crime and even got himself deputized as a member of one of the investigating teams. He was very outspoken against the results of the Warren Commission report on the assassination, and soon found himself out of favor with the public. It took a few years for him to make his comeback, but come back he did.

11. Trail mix ingredients : CRAISINS
“Craisin” is a registered trademark owned by Ocean Spray, and is used to describe dried cranberries.

12. Hunting dog breed : REDBONE
A “redbone” is one of several breeds of American hunting dogs that typically red and tan in color and have large drooping ears.

13. Shaped like Cheerios : ANNULAR
Cheerios breakfast cereal has the distinction of being the first oat-based cereal introduced into the market, hitting the grocery store shelves in 1941. Back then, Cheerios were known as CheeriOats.

21. High cost of leaving? : ALIMONY
In its most common usage, “alimony” is a payment made by one spouse to another for support after a legal separation. The term derives from the Latin “alimonia”, meaning “nourishment, food, support”.

26. Sport similar to paintball : AIRSOFT
The “paint” in paintball isn’t actually paint, but rather a mix of gelatin and food coloring.

32. Offer on Airbnb, say : LEASE OUT
Airbnb is a website-based service that matches people wanting to rent out short-term living quarters to people seeking accommodation.

34. “Ya got me?” : CAPISCE?
“Capeesh?” is a slang term meaning “do you understand?” It comes from the Italian “capisce” meaning “understand”.

35. Note in a Yelp business listing : OPEN NOW
yelp.com is a website that provides a local business directory and reviews of services. The site is sort of like Yellow Pages on steroids, and the term “yelp” is derived from “yel-low p-ages”.

36. Entree often served with a moist towelette : BBQ RIBS
It is believed that our word “barbecue” (BBQ) comes from the Taíno people of the Caribbean in whose language “barbacoa” means “sacred fire pit”.

38. Boy Scout shelter : PUP TENT
A pup tent is a small ridge tent, meant for use by 2-3 people. The term “pup tent” has been around since the mid-1800s. A pup tent was sometimes called a dog tent.

42. Stephen King’s first novel : CARRIE
“Carrie” was Stephen King’s first published novel. The title character is humiliated in a cruel prank during her high school prom in which she ends up covered in the blood of an animal. This trauma leads to a fit rage, with Carrie slaughtering her classmates and the rest of her hometown’s inhabitants. At least, that’s what I read. I don’t do horror …