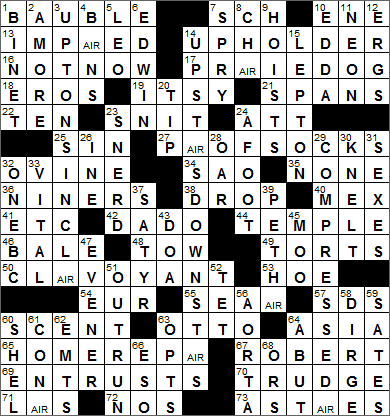 29D. Gas station supply … or what can be found eight times in this puzzle? : COMPRESSED AIR

Today’s Wiki-est, Amazonian Googlies
Across
1. Bagatelle : BAUBLE
A bagatelle is a bauble or trinket and is a word that we imported from French, in which language it has the same meaning.

17. Great Plains tunneler : PRAIRIE DOG
The prairie dog is a type of ground squirrel that is found in the grasslands of North America. Prairie dogs are so named because they inhabit prairies and because they have a warning call that is similar to the bark of a dog.

The Great Plains lie between the Mississippi River and the Rocky Mountains in North America. This vast grassland is called “the Prairies” in Canada.

18. Boy taking a bow : EROS
Eros, the Greek god of love, was also known as Amor.

24. QB stat: Abbr. : ATT
In football, one statistic (stat) used to track the performance of a quarterback (QB) is attempts (ATT).

32. Like the breeds Kerry Hill and English Leicester : OVINE
The Kerry Hill breed of sheep originated in Wales. The breed’s name comes from the Welsh village of Kerry.

English Leicester is a breed of sheep from England that is very rare now in Britain, but are more prevalent in the US and Australia.

34. ___ Tomé : SAO
São Tomé is one of two islands off the west coast of Africa that make up the nation of São Tomé and Príncipe.

36. San Fran team : NINERS
The San Francisco 49ers of the NFL have been playing their home games in the Levi’s Stadium in Santa Clara since 2014. The team moved from the famous Candlestick Park, which they had been using since 1971. Levi’s Stadium, the team’s new home, will get a big boost in January 2016 when it is scheduled to host that year’s Super Bowl.

38. One-third of a fire safety instruction : DROP
We all learned this one as kids, I hope. If one’s clothes or hair catches on fire, this is what I was taught to do:

– STOP … stop moving, so as not to fan the flames, and so as not to hamper anyone trying to render assistance.
– DROP … drop to the ground, lying horizontally, to get the flames away from one’s face (and cover the face with the hands if possible).
– ROLL … roll on the ground in an attempt to put out the flames by depriving them of oxygen. If there is a rug, blanket or coat nearby, one should try to roll that around oneself.

The North American Free Trade Agreement (NAFTA) is between Canada, Mexico and the United States. When NAFTA came into force in 1994 it set up the largest free trade zone in the world.

42. Woodworker’s groove : DADO
In the world of joinery, a dado is a slot cut into a piece of wood across the grain. On the other hand, a “groove” is a slot that is cut with the grain.

44. Philadelphia university : TEMPLE
Temple University in Philadelphia was founded in 1888, and started out as a night school offering classes to people of limited means who had to hold down jobs during the day. These students earned themselves the nickname of “night owls”, leading to the use of “Owls” for Temple’s athletic teams.

49. First-year law course : TORTS
The word “tort” is a French word meaning “mischief, injury or wrong”. Tort law is generally about negligence, when the action of one party causes injury to another but that action falls outside of the scope of criminal law.

57. ’60s antiwar grp. : SDS
Students for a Democratic Society (SDS) was an activist group in the sixties. The SDS organized the largest student strike in the history of the United States on 26 April 1968, with about a million students staying away from class that day. The “Students for a Democratic Society” name was revived in 2006 with the foundation of a new US-based student organization with left wing beliefs. Today’s SDS was founded by a pair of high school students from Greenwich Village, New York.

64. One of a geographical septet : ASIA
The seven continents, in order of size, are:

67. One of the Kennedys : ROBERT
Robert “Bobby” Francis Kennedy (RFK) was the US Attorney General in the administration of his brother President John F. Kennedy and President Lyndon B. Johnson from 1961 to 1964. He then served as US Senator for the State of New York from 1965 until 1968, when he himself was assassinated. Bobby was killed during his own run for the Democratic nomination for the presidency.

72. Vetoes : NOS
“Veto” comes directly from Latin and means “I forbid”. The word was used by tribunes of Ancient Rome to indicate that they opposed measures passed by the Senate.

73. Sibling duo in “Lady, Be Good!,” 1924 : ASTAIRES
“Lady, Be Good!” is a 1924 musical by the Gershwin brothers that tells the story of a brother and sister who have run out of money. In the original Broadway production, the lead characters are played by real-life siblings Fred and Adele Astaire.

Down
1. I.Q. test pioneer : BINET
The first usable intelligence test was invented by a French psychologist named Alfred Binet. Binet collaborated with Théodore Simon and together they produced the Binet-Simon Intelligence Scale that is still in use today for IQ tests.

2. Andrea Bocelli’s 2006 platinum-selling album : AMORE
Andrea Bocelli is a classically-trained tenor who sings popular music, a so-called cross-over artist. Bocelli was born with poor eyesight and then became totally blind at the age of 12 when he had an accident playing soccer.

3. 1943 Pulitzer-winning novelist for “Dragon’s Teeth” : UPTON SINCLAIR
Novelist Upton Sinclair wrote a series of novels between 1940 and 1953 that had a central character named Lanny Budd. Each novel featured Budd against the backdrop of significant political events in the world. The third novel in the series is 1942’s “Dragon’s Teeth”, which is set during the Nazi takeover of Germany in the thirties. “Dragon’s Teeth” won the Sinclair a Pulitzer Prize in 1943.

5. “Seinfeld” uncle : LEO
On the sitcom “Seinfeld”, Jerry’s eccentric maternal uncle is Leo, played by actor Len Lesser. Lesser acted in movies and television for many years, alongside some of the greats of stage and screen. He was fond of telling a marvelous story about acting in the 1973 film “Papillon” starring Steve McQueen and Dustin Hoffman. In his role as a prison guard, Lesser was required to shove McQueen, but McQueen didn’t think that Lesser was pushing him roughly enough. He turned to Lesser and told him “Don’t think of me as a movie star. Think of me as a character in a show”, encouraging him to be more aggressive. When McQueen walked away, Hoffman was left standing there beside Lesser. He paused and quietly said to Lesser, “Think of me as a movie star …”

6. Astronomer Hubble : EDWIN
The famous Hubble Space Telescope was installed in orbit by the Space Shuttle Discovery in 1990. The telescope was named for the astronomer Edwin Hubble, the man who changed our view of the universe by postulating that the universe is expanding.

10. Ancient Norse work : EDDA
The Poetic Edda and Prose Edda are two ancient works that are the source for much of Norse mythology. Both Eddas were written in the 13th century, in Iceland.

11. 10 on a table : NEON
Neon is the chemical element with atomic number 10, and is one of the noble gases, those elements over on the extreme right of the Periodic Table. Because of their “full” complement of electrons, noble gases are very unreactive. The noble gases are helium, neon, argon, krypton and xenon.

12. Physics units : ERGS
An erg is a unit of energy or mechanical work. “Erg” comes from the Greek word “ergon” meaning “work”.

14. 1970s TV series set at 165 Eaton Place : UPSTAIRS, DOWNSTAIRS
“Upstairs, Downstairs” is a superb British drama series that first aired in the early seventies. Set between 1903 and 1930, the show examines the relationship between masters (upstairs) and servants (downstairs) in a large townhouse in London. To me, “Upstairs, Downstairs” is “Downton Abbey” on steroids.

26. Elephant’s tail? : -INE
Something “elephantine” resembles an elephant, or more figuratively is huge and clumsy.

28. Sculler’s implement : OAR
A scull is a boat used for competitive rowing. The main hull of the boat is often referred to as a shell. Crew members who row the boat can be referred to as “oars”.

32. End of an era? : ONE BC
The designations Anno Domini (AD, “year of Our Lord”) and Before Christ (BC) are found in the Julian and Gregorian calendars. The dividing point between AD and BC is the year of the conception of Jesus, with AD 1 following 1 BC without a year “0” in between. The AD/BC scheme dates back to AD 525, and gained wide acceptance soon after AD 800. Nowadays a modified version has become popular, with CE (Common/Christian Era) used to replace AD, and BCE (Before the Common/Christian Era) used to replace BC.

37. Mythical hybrid : SATYR
The satyrs of Greek mythology came with a very high sex drive. They are the “rude” male subjects drawn on the side of old Greek vases. The nubile maidens known as nymphs were often an object of attention for the satyrs.

43. 1950 film noir starring Edmond O’Brien : DOA
Both the original 1950 film “D.O.A.” starring Edmond O’Brien, and its 1988 remake starring Dennis Quaid and Meg Ryan, are excellent movies in my opinion. The basic storyline is that the lead character discovers he has been fatally poisoned and uses the limited time he has left in order to discover who “murdered” him.

52. Vietnamese New Year : TET
The full name for the New Year holiday in Vietnam is “Tet Nguyen Dan” meaning “Feast of the First Morning”, with the reference being to the arrival of the season of spring. Tet usually falls on the same day as Chinese New Year.

56. Main line : AORTA
The aorta originates in the heart and extends down into the abdomen. It is the largest artery in the body.

58. Tune you’re unlikely to dance to : DIRGE
A “dirge” is a slow and mournful musical piece, like a funeral hymn.

59. Fills : SATES
“Sate” is a variant of the older word “satiate”. Both terms can mean either to satisfy an appetite fully, or to eat to excess.

61. 1997 Nicolas Cage film : CON AIR
“Con Air” is an entertaining action movie that was released in 1997. The film tells the story of a bunch of convicts being transported by air who escape and take control of the plane. If you take a look at the movie’s closing credits you’ll see the words “In Memory of Phil Swartz”. Swartz, a welder with the special effects team, was killed in a tragic accident when a static model of the plane used in the movie fell on him.