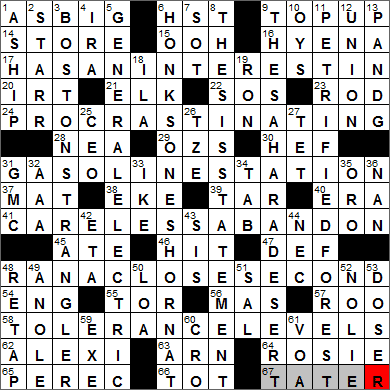 Today’s Wiki-est, Amazonian Googlies
Across
6. Old White House inits. : HST
Harry Truman wanted to go to West Point having served with the Missouri Army National Guard on active duty in WWI, but he couldn’t get in because of his poor eyesight. Young Truman didn’t have the money to pay for college anywhere else. He did manage to study for two years towards a law degree at the Kansas City Law School in the twenties, but he never finished his schooling. So, Harry S. Truman was the last US President (out of a list of ten) who did not have a college degree.

16. Laughing ___ : HYENA
The spotted hyena od Sub-Saharan Africa is also known as the laughing hyena because of the sound it oftens makes, which resembles maniacal laughter.

20. N.Y.C. line : IRT
The Interborough Rapid Transit Company (IRT) was the original private operator of the New York Subway when it opened in 1904. The city took over ownership of the system in 1940, but the lines originally operated by the IRT are still known by the IRT moniker.

22. Stranded message? : SOS
The combination of three dots – three dashes – three dots, is a Morse signal first introduced by the German government as a standard distress call in 1905. The sequence is remembered as the letters SOS (three dots – pause – three dashes – pause – three dots), although in the emergency signal there is no pause between the dots and dashes, so SOS is in effect only a mnemonic. Similarly, the phrases “Save Our Souls” and “Save Our Ship” are also mnemonics, introduced after the “SOS” signal was adopted.

28. Museum funding org. : NEA
The National Endowment for the Arts (NEA) is an agency funded by the federal government that offers support and financing for artistic projects. The NEA was created by an Act of Congress in 1965. Between 1965 and 2008, the NEA awarded over $4 billion to the arts, with Congress authorizing around $170 million annually through the eighties and much of the nineties. That funding was cut to less than $100 million in the late nineties due to pressure from conservatives concerned about the use of funds, but it is now back over the $150 million mark. I wonder how long that will last though …

30. Pajama-clad exec : HEF
Hugh Hefner is from Chicago. His first publishing job was in the military, where he worked as a writer for a US Army newspaper from 1944-46. He went to college after his military service and then worked as a copywriter for “Esquire” magazine. He left “Esquire” to found his own publication that he called “Playboy”, which first hit the newsstands in 1953. “Playboy” has been around ever since.

38. Stretch (out) : EKE
To “eke out” means to “make something go further or last longer”. For example, you could eke out your income by cutting back on expenses. I always have a problem with the commonly cited definition of “eke out” as “barely get by”. Close but no cigar, I say …

39. Besmirch : TAR
“Besmirch” is a derivative of “smirch”, with both words meaning to “make dirty”. In particular, to besmirch is to sully someone’s reputation.

46. Google finding : HIT
The search engine “Google” was originally called “BackRub” would you believe? The name was eventually changed to Google, an intentional misspelling of the word “googol”. A googol is a pretty big number, 10 to the power of 100. That would be the digit 1 followed by 100 zeros.

47. Cool : DEF
The slang word “def” meaning “excellent, cool” may come from the word “definite”. A word I’d only come across in crosswords …

57. Pooh pal : ROO
Like most of the characters in A. A. Milne’s “Winnie the Pooh”, Roo was inspired by on a stuffed toy belonging to Milne’s son, Christopher Robin.

62. ’90s soccer great Lalas : ALEXI
Alexi Lalas is a former international soccer player from Birmingham, Michigan. Lalas appeared for the US national team in the 1994 FIFA World Cup that was held in the US.

63. Prince Valiant’s son : ARN
Arn was the eldest son of Prince Valiant, the comic strip hero. Edward, the Duke of Windsor, called the “Prince Valiant” comic strip the “greatest contribution to English Literature in the past one hundred years”. I’m not so sure …

64. Onetime big name in daytime talk : ROSIE
We don’t get to see Rosie O’Donnell on the screen very much these days. She had a very successful chat show that ran from 1996 to 2002. My favorite performance of hers on the big screen is in a supporting role to Meg Ryan in the 1993 movie “Sleepless in Seattle”.

66. See 67-Across : TOT
67. With 66-Across, little source of carbs : TATER
Ore-Ida founders came up with the idea for Tater Tots when they were deciding what to do with residual cuts of potato. They chopped up the leftovers, added flour and seasoning, and extruded the mix through a large hole making a sausage that they cut into small cylinders. We eat 70 million pounds of this extruded potato every year!

Down
1. “___ of fools sailing on” (Wang Chung lyric) : A SHIP
Wang Chung is a New Wave band from England who had a big hit in 1986 with “Everybody Have Fun Tonight”. The music video for “Everybody Have Fun Tonight” was a little controversial as it included images flashing quickly across the screen, which caused some viewers to have epileptic seizures. “Wang chung” is the first note on the Chinese music scale, and translates literally as “yellow bell”.

3. Notorious 1960s figure : BOSTON STRANGLER
“Boston Strangler” is a name given to the person who murdered several women in Boston, Massachusetts in the early sixties. A serial rapist named Albert DeSalvo confessed to the murders while under arrest for the rapes, but later recanted this confession. DeSalvo was sentenced to life in prison, and was stabbed to death in a prison infirmary in 1973. Because DeSalvo withdrew his confession to the stranglings, some people doubt that the Boston Strangler was ever brought to justice.

5. Company of which Thomas Edison was once a director : GENERAL ELECTRIC
The General Electric Company is usually referred to simply as “GE”. One of the precursor companies to GE was Edison General Electric, founded in 1890 by the inventor Thomas Edison. What we know today as GE was formed two years later when Edison merged his company with Charles Coffin’s Thomson-Houston Electric Company. In 1896, GE was selected as one of the 12 companies listed on the newly formed Dow Jones Industrial Average. GE is the only one of the original 12 that is still on that list. I spent over ten years with GE at the beginning of my working career, and in fact it was GE that asked me to transfer to the US back in the 1980s …

7. One perhaps having one too many : SOT
Our word “sot” comes from the Old English “sott”, meaning a fool. The word “sot” started to be associated with alcohol and not just foolery in the late 1500s.

9. Large portion of Africa : THE SAHARA DESERT
The name “Sahara” means “greatest desert” in Arabic and it is just that, a great desert covering almost 4 million square miles of Northern Africa. That’s almost the size of the United States.

10. Cries of despair : OYS
“Oh vey” is a Yiddish expression of dismay which literally translates as “oh, pain”.

11. Source of hardwood? : PETRIFIED FOREST
Petrified Forest National Park is in northeastern Arizona. The park is so named as it is home to large deposits of petrified wood. Petrified wood is the fossilized remains of vegetation.

13. Consumer products firm since 1837, informally : P AND G
Procter & Gamble was a founded in 1837 by William Procter and James Gamble. Procter was a candlemaker, an immigrant from England. Gamble was a soapmaker, an immigrant from Ireland. The pair had settled in Cincinnati and married two sisters. Their father-in-law persuaded the two to set up in business together, and rest is history.

19. Infomercial pioneer Popeil : RON
Ron Popeil is an inventor who is well known for appearing in infomercials for his own products. One of the more famous infomercials is for his Showtime Rotisserie, which he touts with the phrase “Set it, and forget it!”. Popeil’s company is called Ronco.

25. Fig. at the top of an organizational chart : CEO
Chief Executive Officer (CEO)

26. Lao-___ : TZE
Lao Tse (also Lao-Tzu) was a central figure in the development of the religion/philosophy of Taoism.

32. Moody’s rating : AAA
Moody’s is a credit rating agency which ranks the credit-worthiness of borrowers, a service also provided by Standard & Poor’s. Moody’s was started in 1909 by John Moody when he published a book containing analysis of railroad securities.

33. Presidential nickname : IKE
There doesn’t seem to be any good reason why President Eisenhower was called “Ike”. However, it is known that the nickname dates back to his childhood as his parents called him “Ike” as well as “Dwight”.

34. It may be clicked on a computer : TAB
Like most features on our computer keyboards, the tab key is a hangover from the days of typewriters. When using a typewriter, making entries into a table was very tedious as it involved lots of tapping on the spacebar and backspace key. So, a lever was added to typewriters that allowed the operator to “jump” across the page to positions that could be set by hand. Later this was simplified to a tab key, which could be depressed causing the carriage to jump to the next tab stop in much the same way that the modern tab key works on a computer.

42. Fraternity letter : ETA
When one thinks of the word “main” in the context of the sea, the Spanish Main usually comes to mind. Indeed, the use of the more general term “main”, meaning the sea, originates from the more specific “Spanish Main”. “Spanish Main” originally referred to land and not water, as it was the name given to the mainland coast around the Caribbean Sea in the days of Spanish domination of the region.

43. Start of a cheer : SIS
“Sis boom bah” is apparently a popular cheer in American high schools and colleges (I didn’t know that!). The term was also used by Johnny Carson when he was playing the character Carnac the Magnificent.

44. Japanese computer giant : NEC
NEC is the name that the Nippon Electric Company chose for itself outside of Japan after a re-branding exercise in 1983.

49. Tropical lizard : ANOLE
Anoles are a family of lizards found in the Americas. Anoles can change the color of their skin, so are sometimes called American chameleons.

50. Mauna ___ : LOA
Mauna Loa on the “big island” of Hawaii is the largest volcano on the planet (in terms of volume). The name “Mauna Loa” is Hawaiian for “Long Mountain”.

51. Mineo of movies : SAL
Sal Mineo’s most famous role was John “Plate” Crawford, the kid who was in awe of the James Dean character in “Rebel Without a Cause”. Sadly, Mineo was murdered in 1976 when he was just 37 years old. He was attacked in the alley behind his Los Angeles apartment and stabbed through the heart. When an arrest was made it was discovered that the murderer had no idea that his victim was a celebrity, and that his plan was just to rob anyone who came along.

60. ___-Magnon : CRO
Remains of early man, dating back to 35,000 years ago, were found in Abri de Cro-Magnon in southwest France, giving the name to those early humans. Cro-Magnon remains are the oldest human relics that have been discovered in Europe.

61. Intl. broadcaster : VOA
The US began shortwave propaganda broadcasts in early 1942, just after America entered WWII. The first broadcast to Germany was introduced by the “The Battle Hymn of the Republic” and opened with the words:

Today, and every day from now on, we will be with you from America to talk about the war. The news may be good or bad for us — We will always tell you the truth.