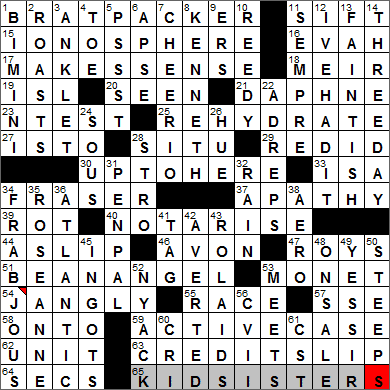 Today’s Wiki-est, Amazonian Googlies
Across
1. Rob Lowe was one : BRAT PACKER
The Brat Pack moniker is reminiscent of the Rat Pack of the fifties and sixties (Franks Sinatra & co.). To qualify as a “founding” member of the Brat pack the actor had to appear in either “The Breakfast Club” or “St. Elmo’s Fire”, or both. So we have Emilio Estevez, Anthony Michael Hall, Rob Lowe, Andrew McCarthy, Demi Moore, Judd Nelson, Molly Ringwald and Ally Sheedy.

The actor Rob Lowe is one of the “founding members” of the so-called Brat Pack, having appeared in the movie “St. Elmo’s Fire”. He is currently playing a regular character on the TV show “Parks and Recreation”. My favorite of his roles though, was playing Sam Seaborn on Aaron Sorkin’s great drama series “The West Wing”. When “The West Wing” first aired, Seaborn was billed as the show’s main character, but outstanding performances from the rest of the cast and some great writing meant that Lowe’s role became “one of many”. This led to some dissatisfaction on Lowe’s part, and eventually he quit the show.

18. She said “Don’t be humble. You’re not that great” : MEIR
Golda Meir was known as the “Iron Lady” when she was Prime Minister of Israel, long before the term came to be associated with British Prime Minister Margaret Thatcher. Golda Meir was born Golda Mabovitch in Kiev (in modern-day Ukraine), and when she was a young girl she moved with her family to the United States and settled in Milwaukee. As a teenager she relocated to Denver where she met and married Morris Meyerson, at the age of 19. She and her husband joined a kibbutz in Palestine in 1921, when she was in her twenties. Meir had been active in politics in the US, and continued her political work in Palestine. She was very influential during WWII, and played a leading role in negotiations after the war leading to the setting up of the state of Israel. By the time she was called on to lead the country, Meir had already retired, citing exhaustion and ill health. But serve she did, and led Israel during turbulent times (e.g. the massacre at the Munich Olympics, and the Yom Kippur War). She eventually resigned in 1974, saying that was what the people wanted.

21. “Scooby-Doo” girl : DAPHNE
“Scooby-Doo, Where Are You!” is a series of cartoons produced for Hanna-Barbera Productions, first broadcast in 1969.

23. Bikini event, briefly : N-TEST
The testing of US nuclear weapons by the US at Bikini Atoll in the middle of 1946 went by the codename “Operation Crossroads”. The tests used A-bombs and were designed to measure the effect of blasts on navy vessels. There were three tests planned, but the third had to be cancelled as the Navy couldn’t decontaminate the ships used in the second test.

33. “Love ___ Ball” (Glenn Ford film) : IS A
“Love Is a Ball” is a 1963 romantic comedy film starring Glenn Ford and Hope Lange, with the magnificent Charles Boyer supporting. Haven’t seen this one …

Glenn Ford was the most stoic of actors I’ve always thought. Ford was born in Canada, and was a great-nephew of Sir John A. McDonald, the country’s first Prime Minister.

40. Put a seal of approval on, overseas : NOTARISE
A notary public is a public officer licensed to perform specific legal actions in non-contentious legal matters. The main duties are to administer oaths, take affidavits and witness the execution of documents.

44. “There’s many ___ …” : A SLIP
“There’s many a slip twixt the cup and the lip” is a favorite proverb of mine. The idea behind the adage is that even when things look certain, things can still go wrong.

46. Classic publisher of paperbacks : AVON
Avon was a noted publisher of comic books and paperbacks. The company was founded in 1941, and focused on pretty low-brow literature designed for popular appeal.

47. Composer Harris and others : ROYS
Roy Harris was a composer of classical works from Chandler, Oklahoma. Harris composed at least 18 symphonies, of which the most famous is his Symphony No. 3 written between 1937 and 1938.

53. Giverny’s most famous resident : MONET
Giverny is a commune in northern France, most famous as the location of artist Claude Monet’s home. It was in Giverny that Monet painted his famous “Water Lilies”.

65. Alex P. Keaton and Marcia Brady each had two : KID SISTERS
Alex P. Keaton is a brilliant character in the sitcom “Family Ties” that ran from 1982-89. Alex was played, very ably, by a young Michael J. Fox. The character is a very vocal Young Republican, which might explain why President Reagan called “Family Ties” his favorite television show.

On the television show “The Brady Bunch”, Marcia was the eldest of the girls in the family and was played by Maureen McCormick.

Down
1. 1935-37 home for Hemingway : BIMINI
Bimini is the western part of the Bahamas, and the closest point to the mainland United States. Bimini was home to Ernest Hemingway from 1935-37, and while there he saw an Atlantic blue marlin captured that weighed about 500 pounds. This catch was the apparent inspiration for his story “The Old Man and the Sea”. More recently, in 1987 Senator Gary Hart’s political career was derailed when photos of him with model Donna Rice surfaced. The pictures were taken on the yacht “Monkey Business” while docked in Bimini.

6. Projection for some kneelers : APSE
The apse of a church or cathedral is a semicircular recess in an outer wall, usually with a half-dome as a roof and often where there resides an altar. Originally apses were used as burial places for the clergy and also for storage of important relics.

7. “À bientôt,” across the Channel : CHEERIO
The French phrase “à bientôt” translates as “see you soon”.

8. Cole of fashion : KENNETH
Kenneth Cole is a clothing designer from Brooklyn, New York. Cole is married to Maria Cuomo, the daughter of former Governor of new York Mario Cuomo.

11. Unvarying, in music : SEMPRE
“Sempre” is a musical term, a direction instructing the performer to play in the same manner throughout.

28. Minute Maid Park team member, for short : ‘STRO
Enron Field, as it was known, is a retractable-roof ballpark that was built next to Houston’s old Union Station. Enron paid $100 million to get its name on the field, and then when the world found out what a scam Enron actually was, the Astros bought back the contract for the name, for a mere $2.1 million. The stadium became Astros Field for a few months, until the Coke people paid $170 million for a 28-year contract to christen the stadium Minute Maid Park. A good deal for the Astros, I’d say.

34. Splendid, humorously : FRABJOUS
A blog reader kindly reminded me that “frabjous” is an adjective found towards the end of the wonderful nonsense poem called “Jabberwocky” that features in Lewis Carroll’s “Through the Looking Glass and What Alice Found There”.

And, has thou slain the Jabberwock?
Come to my arms, my beamish boy!
O frabjous day! Callooh! Callay!’
He chortled in his joy.

35. Waitress at the fictional Lobo Lounge : ROSEANNE
The comedienne Roseanne Barr is perhaps best known as the star of her own sitcom called “Roseanne” in which she played the character Roseanne Conner. In 2012 Barr unsuccessfully vied for the Green Party’s nomination for US President. She didn’t give up though, and was successful in winning the nomination of the Peace and Freedom Party. In the 2012 presidential election she earned over 60,000 votes, and placed sixth in the list of candidates.

36. Canaries’ setting : ATLANTIC
The Canary Islands are located off the northwest coast of Africa. The islands aren’t named for the canary bird and in fact the bird is named for the islands. The Canary Islands name comes from the Latin “Canariae Insulae” which translates as “Island of the Dogs”, the original name for the biggest island now called Gran Canaria. In the days of Ancient Rome the island was noted as a home to a large number of very large dogs.

56. Year in Trajan’s reign : CVII
Trajan was the Emperor of Rome between the years 98 and 117. The Roman Empire reached further geographically under Trajan than any other emperor.

61. Part of Fla. is on it : CST
The Florida Panhandle is in the Central Time Zone, whereas the rest of the state is of course in the Eastern Time Zone.