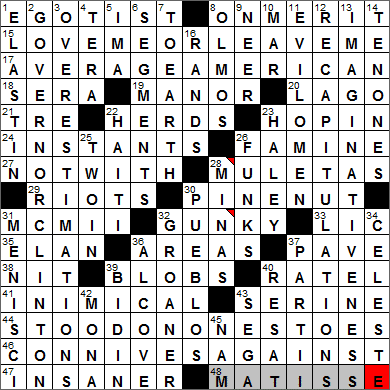 The actress and singer Doris Day was born Doris Kappelhoff in Cincinnati, Ohio. Day made more than 650 recordings as a singer with Columbia Records, and also appeared in 39 movies. Outside the world of entertainment, she has been an ardent supporter of animal rights. She now lives in Carmel-by-the-Sea in California, along with her many pets and stray animals that she has adopted over the years.

17. Peoria resident’s representation : AVERAGE AMERICAN
Peoria is the oldest European settlement in the state of Illinois, having been settled by the French in 1680. The city is famous for being cited as “the average American city”.

21. ___ corde (piano pedaling direction) : TRE
The use of the soft pedal on a piano is notated with the words “una corde” or “due corde” as the instruction to begin use of the pedal. The instruction “tre corde” or “tutte le corde” denote when the pedal should be released.

26. What a biblical black horseman symbolizes : FAMINE
The Four Horsemen of the Apocalypse are introduced in the Book of Revelation in the Christian Bible. Each of the four represents woe for man, in the form of pestilence, war, famine and death. The four horsemen ride on a white, red, black and pale horse respectively.

28. Matadors’ red capes : MULETAS
The “muleta” is the red flannel cloth that a matador uses towards the end of a bull fight, instead of a cape. The muleta serves to distract the bull and also to hide the sword that is used for the kill. The term “matador” is only used in English, and translates aptly enough as “killer”.

29. People might leave them in tears : RIOTS
Tear gas is used by the police in riot control, and for self-defence purposes. However, the use of tear gas in war is banned by international treaties that have been signed by most states.

31. Year “The Tale of Peter Rabbit” was published : MCMII
Beatrix Potter was an English author, famous for the children’s books she wrote and illustrated. The most famous character in her stories was Peter Rabbit, whose sisters were Flopsy, Mopsy and Cottontail. Potter put her talent as an artist to good use in the scientific world as well. She recorded many images of lichens and fungi as seen through her microscope. As a result of her work, she was respected as an expert mycologist.

35. Life : ELAN
Our word “élan” was imported from French, in which language the word has a similar meaning to ours i.e “style” or “flair”.

39. Things in lava lamps : BLOBS
The lava lamp was invented in 1960 by a British man, Edward Craven-Walker. The “lava” is a mixture of wax and carbon tetrachloride, floating in a water/glycerol mix. The wax reduces in density as it picks up heat from the incandescent bulb in the lamp’s base. The wax rises, cools, and then sinks to the bottom of the liquid only to be heated again.

40. Honey badger : RATEL
The honey badger is found in most of Africa, as well as other parts of the world. It is also called a ratel, because that is the Afrikaans word for the little beast.

41. Hostile : INIMICAL
Inimical means hostile, harmful in effect. It has the same root as our word “enemy”, from the Latin word for enemy, “inimicus”.

43. Amino acid in proteins : SERINE
The amino acid called serine is used to make proteins, although it is not essential in the human diet as it can be manufactured in the body. Serine is found in abundance in the protein of silk, and so the name “serine” comes from “sericum”, the Latin for “silk”.

Amino acids are essential to life in many ways, not least of which is their use as the building blocks of proteins.

48. “Jazz” artist : MATISSE
Henri Matisse was a French artist renowned for his contribution to modern art. In his early career, Matisse was classed as a “fauve”, one of the group of artists known as the “wild beasts” who emphasized strong color over realism in their works. He was a lifelong friend of Pablo Picasso, and the two were considered to be good-natured rivals so their works are often compared. One major difference between their individual portfolios is that Picasso tended to paint from his imagination, whereas Matisse tended to use nature as his inspiration.

“Jazz” is a 1947 book of stencil prints made from paper cutouts by Henri Matisse. Matisse was in his seventies when turned to cutouts as an artform, because he could no longer paint or draw very easily due to poor health.

Done
1. Pliable protein : ELASTIN
Elastin is a very pliable protein found in the body’s connective tissue. It is the elasticity of elastin that helps skin to return to its original position when it is pressed or pulled at.

2. 1991 entrant for the Democratic presidential nomination : GOVERNOR CLINTON
Bill Clinton was elected Governor of Arkansas in 1978 at the age of 32, making him the youngest governor in the country at the time, and the fourth governor in the history of the US.

4. Lead-in to flops : TERA-
The prefix tera- signifies a trillion and comes from the Greek word “teras” meaning “monster”.

5. Springsteen’s “___ Rocker” : I’M A
Bruce Springsteen is a rock singer and songwriter, famously from New Jersey. A lot of Springsteen’s works are centered on his home state and the American heartland. His most famous album is “Born in the USA”, which was released in 1984. Springsteen lives in New Jersey, with his wife Patti Scialfa and their children.

7. How David Bowie’s character fell, in a 1976 sci-fi film : TO EARTH
The 1976 British film “The Man Who Fell to Earth” is perhaps most famous for its star, David Bowie. The movie was directed by Nicolas Roeg, and is based on a 1963 novel of the same name written by Walter Tevis.

8. “Miami Vice” Emmy winner : OLMOS
Edward James Olmos is a Mexican American actor. I mostly remember Olmos as the Lieutenant who was the boss of Crockett and Tubbs on television’s “Miami Vice”.

9. Aye’s opposite, in verse : NE’ER
A kind blog reader (below) pointed out that “aye” can be used as an adverb meaning “ever”. So, “ne’er” (never) has the opposite meaning of “aye”.

13. What prosaic minds lack : IMAGINATIVENESS
Something that is prosaic is “like prose”. We use the term “prosaic” to mean “dry, arid, ordinary”, as in comparing prose to poetry … well, in a way …

14. Exchange for a Hamilton : TEN ONES
The US ten-dollar bill features the image of Alexander Hamilton, the first US Secretary of the Treasury. As such, ten-dollar bills are sometimes called “Hamiltons”. By the way, the $10 bill is the only US currency in circulation in which the portrait faces to the left.

22. Big exporter of mangoes : HAITI
The Republic of Haiti occupies the smaller, western portion of the island of Hispaniola in the Caribbean. The rest of the island is taken up by the Dominican Republic. Haiti is one of only two nations in the Americas to have French as an official language, the other being Canada.

23. Comets’ head : HALEY
The famed rock & roll singer and songwriter Bill Haley started out his career as the frontman of Bill Haley and the Saddlemen, playing country and western music. The name was changed to Bill Haley and His Comets in 1952 as the band started performing rock & roll songs. The name “Comets” was imitative of the common mispronunciation of the famous Halley’s comet (sometimes written incorrectly as “Haley’s” comet). The group recorded “Rock Around the Clock” a year later, in 1953.

26. Blue states : FUNKS
“Funk” is ill-humor, a word that dates back to the mid-1700s and is probably a term that came from Scottish and northern English.

28. ___ Gerais (Brazilian state) : MINAS
Minas Gerais the one the states of Brazil, of which there are 26 in all. Minas Gerais is the largest producer of coffee in the country.

30. Some brick buildings : PUEBLOS
A pueblo is a Native American village, a term used in the American Southwest. The buildings in a pueblo are usually made of stone and adobe mud, and hence are ochre in color.

32. “Does the name Quasimodo ring a bell?,” e.g. : GROANER
Quasimodo is the title character in the Victor Hugo’s novel “The Hunchback of Notre-Dame”. There is some recent evidence that a hunchbacked stone carver, working at Notre-Dame at the same time Hugo was alive, may have been the inspiration for the Quasimodo the bellringer.

34. Big name in frozen pizza : CELESTE
Celeste frozen pizza was named after a real life Celeste, Celeste Lizio who came from Italy and who lived in Chicago starting in the 1930s. Celeste and her husband closed their restaurant in Chicago and turned to the sale of pizzas.

36. What a Pullman kitchen is built into : ALCOVE
A “Pullman kitchen” is a small affair, a small setup in an apartment, perhaps. The term “Pullman” comes from the long sleeping cars made by the Pullman Company for trains.

42. “First name” in the Louvre : MONA
Leonardo da Vinci’s masterpiece that we know in English as the “Mona Lisa” is called “La Gioconda” in Italian, the language of the artist. It’s also known as “La Joconde” by the Government of France which owns the painting and displays it in the Louvre Museum in Paris. The title comes from the name of the subject, almost certainly Lisa Gherardini, wife of Francesco del Giocondo. Giocondo was a wealthy silk merchant in Florence who commissioned the painting for the couple’s new home to celebrate the birth of their second son.

43. Zaxxon maker : SEGA
Sega is a Japanese video game company headquartered in Tokyo. Sega actually started out 1940 in the US as Standard Games and was located in Honolulu, Hawaii. The owners moved the operation to Tokyo in 1951 and renamed the company to Service Games. The name “Sega” is a combination of the first two letters of the words “Se-rvice” and “Ga-mes”.