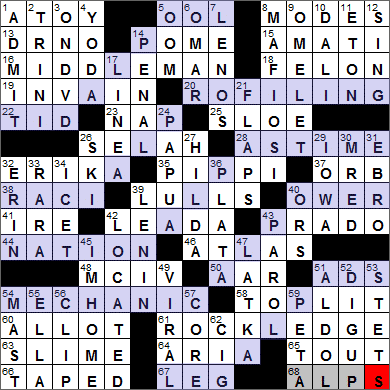 CROSSWORD SETTER: Stu Ockman
THEME: Climbing the Alps … we have five themed answers that snake through the grid (in blue in my grid), with the letters ALP in the middle of each answer that “climbs” from one row to another four rows above:

68A. High points of which five are found going up in this puzzle : ALPS

8. Figures in statistics : MODES
In the world of statistics, the mode of a set of numbers is the value that appears most often.

13. Film resident of Crab Key Island : DR NO
“Dr. No” may have been the first film in the wildly successful James Bond franchise, but it was the sixth novel in the series of books penned by Ian Fleming. Fleming was inspired to write the story after reading the Fu Manchu tales by Sax Rohmer. If you’ve read the Rohmer books or seen the films, you’ll recognize the similarities between the characters Dr. No and Fu Manchu.

14. Apple, e.g. : POME
The Latin word for “fruit” is “pomum”, which gives us the botanical term “pome” used for a group of fleshy fruits, including apples and pears.

15. Instrument bearing the coat of arms of France’s Charles IX : AMATI
The first of the Amati family to make violins was Andrea Amati, who lived in the 14th century. He was succeeded by his sons, Antonio and Girolamo. In turn, they were succeeded by Girolamo’s son, Nicolo. Nicolo had a few students who achieved fame making musical instruments as well. One was his own son, Girolamo, and another was the famed Antonio Stradivari.

25. Apricot relative : SLOE
The sloe is the fruit of the blackthorn bush, and is the flavoring that gives gin its distinctive taste.

26. Psalm ender : SELAH
“Selah” is a word that appears commonly in the Book of Psalms in the Bible. Apparently the exact meaning of the word is unclear, but it is used as an instruction in reading or singing the text.

32. Eleniak of “Baywatch” : ERIKA
Erika Eleniak is a former Playboy Playmate from Glendale, California. After modeling, Eleniak turned to acting and is perhaps best known for playing Shauni McClain on the TV show “Baywatch”.

35. “___ Longstocking” : PIPPI
Pippi Longstocking appears as the heroine in a series of books written by Swedish author Astrid Lindgren. Lindgren was quite the activist, very well known in the circles working for children’s and animal rights, In particular, Lindgren campaigned heavily against corporal punishment.

43. Home of “The Nude Maja” : PRADO
The Museo del Prado is in Madrid, the capital of Spain, and has one of the finest art collections in the world. The gallery’s most famous work is “Las Meninas” By Velazquez.

Francisco Goya was a Spanish painter, often called the last of the Old Masters and the first of the moderns. Two of Goya’s most famous works are “The Nude Maja” and “The Clothed Maja”.

50. Switzerland’s ___ Gorge : AAR
The Aar Gorge is a beautiful location through which the river Aar flows in Switzerland. The walls of the gorge rise vertically at either side of the riverbed, creating a spectacular sight.

64. Da capo ___ : ARIA
An “aria da capo” is an operatic aria which has three sections, with the final section being very similar to the first, a “recap” as it were. This form was very popular during the Baroque era. The composer quite often wrote out the first and second sections in full, and then simply specified “da capo” for the third section (literally “from the head”) indicating that the first section should be played and sung again in full.

67. Long writers’ blocks? : LEG(AL P)ADS
Like so many things it seems, our paper sizes here in North America don’t conform with the standards in the rest of the world. ISO standard sizes used elsewhere have some logic behind them in that the ratio of width to length is usually one to the square root of two. This mathematical relationship means that when you cut a piece of paper in two each half preserves the aspect ratio of the original, which can be useful in making reduced or enlarged copies of documents. Our standard size of “letter” (8.5 x 11 inches) was determined in 1980 by the Reagan administration to be the official paper size for the US government. Prior to this, the “legal” size (8.5 x 14 inches) had been the standard, since 1921.

Down
2. Lopez with the 1965 hit “Lemon Tree” : TRINI
Trini Lopez is a noted singer and guitarist from Dallas, Texas. He is perhaps best known for his international hit “If I Had a Hammer” from 1963, as well as “Lemon Tree” from 1965.

3. One way to see a movie : ON DVD
The acronym DVD doesn’t actually stand for anything these days, although it originally was short for Digital Video Disk. The use of the word “video” was dropped as DVDs are no longer limited to storing video content.

4. Big-eared “Star Wars” character : YODA
Yoda is one of the most beloved characters in the “Star Wars” series of films. Yoda’s voice was provided by the great modern-day puppeteer Frank Oz of “Muppets” fame.

The tuba is the lowest pitched of all the brass instruments, and one of the most recent additions to the modern symphony orchestra (usually there is just one tuba included in an orchestral line-up). “Tuba” is the Latin word for “trumpet, horn”.

6. Stickup man on “The Wire” : OMAR
The character Omar Little is played by Michael K. Williams on the HBO series called “The Wire”. I didn’t watch “The Wire” when it first aired but we ending up buying all five series on DVD and we watched the whole thing a couple of years ago. It’s is a great drama series, and I thoroughly recommend it. Personally, I think that HBO produces some of the best dramas on American television.

7. Jay ___ Garage (popular automotive Web site) : LENO’S
Jay Leno was born James Leno in New Rochelle, New York. Jay’s father was the son of Italian immigrants, and his mother was from Scotland. Leno grew up in Andover, Massachusetts and actually dropped out of school on the advice of a high school guidance counsellor. However, years later he went to Emerson college and earned a Bachelor’s degree in speech therapy. Leno also started a comedy club at Emerson in 1973. Today Jay Leno is a car nut and owns about 200 vehicles of various types. You can check them out on his website: www.jaylenosgarage.com.

8. Partners in crime : MAFIOSI
A Mafioso is a member of the Mafia, with the plural being Mafiosi (or sometimes Mafiosos).

9. Western ___ : OMELET
A Western omelet (or omelette) is also known as a Southwest omelet or a Denver omelet. The usual ingredients include diced ham, onions and green bell peppers.

10. “Swans Reflecting Elephants” artist : DALI
“Swans Reflecting Elephants” is a painting that Salvador Dali completed in 1937. The title is somewhat self-explanatory. The scene features some swans on a lake, along with their reflections. In the reflection the swans take on the appearance of elephants, with the swans’ necks becoming elephant trunks and wings becoming ears.

11. William and Harry attended it : ETON
The world-famous Eton College is just a brisk walk from Windsor Castle, which itself is just outside London. Eton is noted for producing many British leaders including David Cameron who took power in the last UK general election. The list of Old Etonians also includes Princes William and Harry, the Duke of Wellington, George Orwell, and the creator of James Bond, Ian Fleming (as well as 007 himself as described in the Fleming novels).

21. Ruckuses : FLAPS
The word “ruckus” is used to mean a commotion, and has been around since the late 1800s. “Ruckus” is possibly a melding of the words “ruction” and “rumpus”.

24. Historical name for New Guinea : PAPUA
New Guinea is an island in the southwest Pacific Ocean. It is the second largest island in the world (after Greenland). The western half of the the island is ruled by Indonesia, and is made up of the provinces of Papua and West Papua. The eastern half of the island forms the mainland of the independent country called Papua New Guinea.

29. U.S.S. ___ (W.W. II battleship) : IOWA
The USS Iowa that saw action in WWII was the fourth ship to be so called by the US Navy. Among her many missions, the Iowa carried President Franklin D. Roosevelt to Casablanca in 1943 for one of the famed war summits with Winston Churchill and Josef Stalin.

30. TV neigh-sayer? : MR ED
“Mister Ed” first aired in 1961 and ran for almost five years. It was a very successful show (and even made it to Ireland!). Mister Ed, the talking horse, was a palomino that had the real name of Bamboo Harvester. Mister Ed’s “voice” was that of actor Allan “Rocky” Lane, a star of a lot of B-movie westerns from the forties and fifties. In the show, Mister Ed would only talk to the lead (human) character Wilbur, played by Alan Young, leading to some hilarious situations. Mister Ed had a stunt double and stand-in for the show, another horse called Pumpkin. Pumpkin later played the horse that made frequent appearances on the show “Green Acres”.

31. River of Iberia : EBRO
The Ebro is the longest river in Spain. The river was known by the Romans as the Iber, and it is the “Iber” river that gives the “Iberian” Peninsula its name.

32. Leprechaun’s home : ERIN
“Éire”, is the Irish word for “Ireland”. “Erin” is an anglicized version of “Éire” and actually corresponds to “Éirinn”, the dative case of “Éire”.

Scipio Africanus was a general and politician in the Roman Republic. Scipio’s most notable victory as a soldier was in the Second Punic War between Rome and Carthage. Scipio was the Roman general who defeated Hannibal at Zama in the final battle of the war.

34. Actor who made his film debut in “Breakin’,” 1984 : ICE-T
Rapper Ice-T must be sick of having his name come up as an answer in crossword puzzles. Maybe he should have stuck to his real name, Tracy Marrow? Then again, maybe not … Ice-T has been interested in acting for decades and made his film debut in the 1984 movie about break-dancing called “Breakin’”. He has also played Detective Fin Tutuola in the TV show “Law & Order: Special Victims Unit” since the year 2000.

43. Spoken, as evidence : PAROL
In the law, a statement described as parol is given orally as opposed to in written form.

47. “Taxi” worker : LATKA
Latka Gravas is one of the most popular characters in the TV sitcom “Taxi” that aired in the late seventies and early eighties. Latka was played by the controversial comic actor Andy Kaufman. The producers of “Taxi” had the character written around a persona that Kaufman was using in his standup routines called “Foreign Man”.

51. Perfume ingredient : ALDOL
Aldol is a colorless or yellow-tinged organic compound that is used as a solvent in the word of perfumery.

53. Doesn’t strike out in the end : STETS
“Stet” is the Latin word meaning “let it stand”. In editorial work, the typesetter is instructed to disregard any change previously marked by writing the word “stet” and then underscoring that change with a line of dots or dashes.

55. She, in Seville : ELLA
The city of Seville is the capital of Andalusia in southern Spain. Seville is a favored setting for many operas including “The Barber of Seville” by Rossini, “Fidelio” by Beethoven and Mozart’s “Don Giovanni” and “The Marriage of Figaro”.

59. “Fur Is Dead” org. : PETA
People for the Ethical Treatment of Animals (PETA) is a very large animal rights organization, with 300 employees and two million members and supporters worldwide. Although the group campaigns for animal rights across a broad spectrum of issues, it has a stated focus in opposition of four practices: