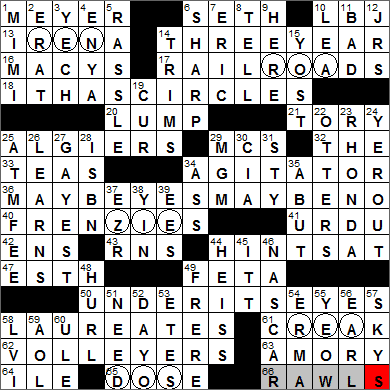 CROSSWORD SETTER: David Levinson Wilk
THEME: Up All Night … today’s grid is pretty tired, as we can tell from the CIRCLES UNDER THE EYES i.e. the circled letters in the grid are all located right under the letters EYE.
BILL BUTLER’S COMPLETION TIME: 16m 54s
ANSWERS I MISSED: 0

Today’s Wiki-est, Amazonian Googlies
Across
1. “Twilight” author Stephenie : MEYER
The reference, is to the “Twilight” series of books by Stephenie Meyer. “The Twilight Saga” is a series of films based on the books. I don’t do vampires …

6. Green of TV’s “Robot Chicken” : SETH
Seth Green is an actor and comedian best-known by many as creator and voice actor on the animated television series “Robot Chicken”. I know him best for playing “Napster” in the 2005 film “The Italian Job”.

16. Store with a red star logo : MACY’S
The original Macy’s store was opened by Rowland Hussey Macy in Haverhill, Massachusetts in 1851. This store, and several others that Macy opened, all failed. Macy picked himself up though, and started over again in New York City. Those early New York stores all focused on the sale of dry goods, but added departments quickly as the clientele grew. The Macy’s “star” logo has been around since the company was first established. Macy chose the star because it mimicked the star tattoo that he got as a teenager when he was working on a whaling ship out of Nantucket.

18. With 50-Across, how one can tell that this puzzle was up all night waiting to be solved? : IT HAS CIRCLES
(50. See 18-Across : UNDER ITS EYES)
“Circles under the eyes” are more correctly known as periorbital dark circles. These circles can be caused by fatigue. A lack of sleep can make the skin a little paler, which allows the blood under the skin become more visible leading to a blue/dark appearance.

21. Churchill, e.g. : TORY
A member of the Conservative Party in the UK is known as a Tory.

Soon after Winston Churchill took over as Prime Minister of the UK in 1940, he delivered some stirring speeches that rallied the country in the face of German victories right across Europe. The first of these was his “Blood, toil, tears, and sweat” speech as he reported the formation of a new coalition government designed to unite the country in time of war. The second was his “We shall fight on the beaches” speech, as he reported the successful evacuation of Allied troops from Dunkirk. The third speech concluded with, “This was their finest hour”, words delivered to Parliament just as France fell, and Churchill pledged that the British Commonwealth would fight on, alone if necessary. The last lines of this third speech, from this magnificent orator, were:

… But if we fail, then the whole world, including the United States, including all that we have known and cared for, will sink into the abyss of a new dark age made more sinister, and perhaps more protracted, by the lights of perverted science. Let us therefore brace ourselves to our duties, and so bear ourselves, that if the British Empire and its Commonwealth last for a thousand years, men will still say, ‘This was their finest hour’.

25. Setting of Camus’s “The Stranger” : ALGIERS
“The Stranger” was Albert Camus’s first novel, and it is probably his most famous. The original title in French is “L’Étranger”, which can indeed be translated as “The Stranger”. However, the book is usually called “The Outsider” when translated into English, as this alternative meaning of “L’Étranger” better reflects the novel’s theme.

29. Mike holders : MCS
“Emcee” come from “MC”, an abbreviation for the Master or Mistress of Ceremonies.

34. Firebrand : AGITATOR
A firebrand is piece of burning wood that is used to kindle a fire. In a figurative sense, a firebrand is an agitator, someone who kindles passions.

42. Some of Vanna’s letters? : ENS
Vanna White is the lady who turns the letters on the “Wheel of Fortune” game show. White is big into knitting and crochet, and has her own line of yarns called “Vanna’s Choice”.

47. Old Testament book: Abbr. : ESTH
Esther was a Jewish queen, wife of the Persian king Ahasuerus, and the heroine of the Book of Esther in the Bible. By the way, Esther is the only book in the Bible that doesn’t mention “God”.

49. Crumbly topping : FETA
Feta is a Greek cheese made from sheep’s milk, or a mixture of sheep’s and goat’s milk. The cheese is salted and cured in a brine solution for several months before it is eaten.

58. Nobelists, e.g. : LAUREATES
The Peace Prize is the most famous of the five prizes bequeathed by Alfred Nobel. The others are for Physics, Chemistry, Physiology or Medicine, and Literature. There is also a Nobel Prize in Economics that is awarded along with the original five, but it is funded separately and is awarded “in memory of Alfred Nobel”. Four of the prizes are awarded by Swedish organizations (Alfred Nobel was a Swede) and so the award ceremonies take place in Stockholm. The Peace Prize is awarded by the Norwegian Nobel Committee, and that award is presented in Oslo.

64. ___ de Montréal : ILE
The original name of Montreal was Ville-Marie, meaning the City of Mary. Ville-Marie is now the name of a borough in the city, the borough which includes the downtown area and “Old Montreal”. The present-day city covers most of the Island of Montreal (in French, Île de Montréal) that is located where the Saint Lawrence and Ottawa Rivers meet. The name Montreal comes from the three-headed hill that dominates the island and is called Mount Royal.

66. Grammy winner Lou : RAWLS
Lou Rawls was an American soul and blues singer known for his smooth vocal style. With his singing career well on the way, Rawls was asked to sing “The Star Spangled Banner” in 1977 at a Muhammad Ali fight in Madison Square Garden. This early performance led to him being asked to sing the anthem many, many times in the coming years with his last rendition being at a World Series game in 2005. Rawls passed away in January of the following year.

Down
1. Actress Rogers : MIMI
Mimi Rogers is a favorite actress of mine, although she hasn’t really had the starring roles in big movies. Off screen. Rogers is famous for her association with her second husband, Tom Cruise. It was Mimi who introduced Tom to Scientology. Mimi Rogers can also be seen playing a lot of so-called “celebrity poker”, and she is on the board of directors of the World Poker Tour.

2. “In principio ___ Verbum” (biblical phrase) : ERAT
“In principio erat Verbum” are the opening lines of what is called the Last Gospel, a passage from the gospel according to St. John. The words (and those that follow) are used in the Roman Catholic Mass, and translate as “In the beginning was the Word”.

4. 2006 Grammy winner for “Amarantine” : ENYA
Enya’s real name is Eithne Patricia Ní Bhraonáin, which can translate from Irish into Enya Brennan. Her Donegal family (in the northwest of Ireland) formed a band called Clannad, which included Enya. In 1980 Enya launched her very successful solo career. She sure does turn up a lot in crosswords!

10. Bucolic setting : LEA
The word “bucolic”, meaning rustic or rural, comes to us from the Greek word for a “cowherd”, “boukolos”.

15. Baseball manager Ned : YOST
Ned Yost is the manager of the Kansas City Royals, and former manager of the Milwaukee Brewers. Yost also played professional baseball, as a catcher. In between his playing and coaching careers, Yost worked as a taxidermist …

23. Fleming of “Spellbound” : RHONDA
Rhonda Fleming is a film and television actress who was most successful in the forties and fifties. Back then, Fleming had bright red hair to offset a fair complexion. Her appearance was so suited for the Technicolor process that Flaming had the nickname “The Queen of Technicolor”.

28. Info on the reverse of a title page: Abbr. : ISBN
The International Standard Book Number (ISBN) was invented by one Gordon Foster who is now a professor at Trinity College Dublin in Ireland. The code was originally developed for booksellers, so that they had a unique number (and now a barcode) for each publication.

30. The sculpture “Kryptos” sits outside its hdqrs. : CIA
“Kryptos” is a fascinating sculpture that sits on the grounds of the CIA headquarters in Langley, Virginia. The work contains four encrypted messages that were created by the sculptor Jim Sanborn and Ed Scheidt, then Chairman of the CIA Cryptographic Center. What’s interesting is that only three of the messages has been decoded to date.

37. Old Testament book: Abbr. : EZR
In the Hebrew Bible the Book of Ezra was originally combined with the Book of Nehemiah, with the two being separated in the early days of the Christian Era.

45. Big corp. in the aerospace industry : ITT
International Telephone & Telegraph (ITT) was formed in 1920 from the Puerto Rico Telephone Company. ITT divested its telecommunications business in 1986, today the company is known for its products in the field of water and fluids management, as well motion and flow control. Many of ITT’s products are sold into the aerospace market.

46. Org. whose members wear fire-resistant clothing : NASCAR
NASCAR stands for the National Association for Stock Car Auto Racing. NASCAR is very, very popular and commands the second largest television audience of any professional sport in America, second only to football.

52. “Me say” this word in a 1957 hit : DAY-O
“Day-O (The Banana Boat Song)” is a traditional folk song from Jamaica. It is sung from the standpoint of dock workers unloading boats on the night shift, so daylight has come, and they want to go home. The most famous version of “Day-O” was recorded by Harry Belafonte, in 1956.

53. Hot times in Haiti : ETES
One might spend the summer (été) under the sun (le soleil) in French-speaking countries.

56. ___ of Warwick (War of the Roses figure) : EARL
The Wars of the Roses was a series of civil wars fought for the throne of England between the rival Houses of Lancaster and York. Ultimately the Lancastrians emerged victorious after Henry Tudor defeated King Richard III at the Battle of Bosworth Field. Henry was crowned King Henry VII and united the two Houses by marrying his cousin, Elizabeth of York. Henry had a relatively long reign of 23 years that lasted until his death, after which his son succeeded to the throne as Henry VIII, continuing the relatively short-lived Tudor dynasty. He ruled from 1509 until his death in 1547. Henry VIII was the last male to lead the the House of Tudor, as his daughter Queen Elizabeth I died without issue.