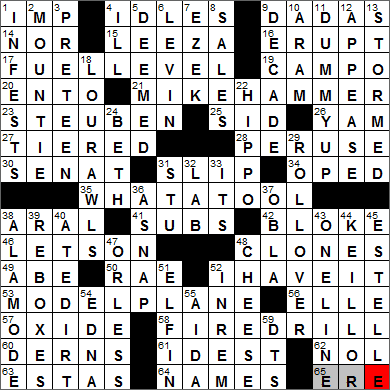 CROSSWORD SETTER: Jaime Hutchison & Vic Fleming
THEME: Tooling Along … each of today’s themed answers ends with the name of a tool:

17A. Info on a dashboard gauge : FUEL LEVEL
21A. “I, the Jury” detective : MIKE HAMMER
53A. Flier made from a do-it-yourself kit : MODEL PLANE
58A. Safety exercise prompted by an alarm : FIRE DRILL

Today’s Wiki-est, Amazonian Googlies
Across
15. TV host Gibbons : LEEZA
Leeza Gibbons has her own radio show called “Hollywood Confidential”, and used to have her own talk show on NBC television that aired from 1994 to 2000. Gibbons is the founder of a nonprofit group called Leeza’s Place which supports people giving care to patients with memory disorders. Since 2007 she has been a board member of California’s stem cell research agency, appointed by Governor Arnold Schwarzenegger.

16. Go off like a volcano : ERUPT
Our word “volcano” comes from “Vulcano”, the name of a volcanic island off the coast of Italy. The island’s name comes from Vulcan, the Roman god of fire. The Romans believed that the island of Vulcano was the chimney of the forge belonging to the god Vulcan. The Romans also believed that the eruptions on Mount Etna in Sicily were caused by Vulcan getting angry and working his forge so hard that sparks and smoke flew out of the top of the volcano.

17. Info on a dashboard gauge : FUEL LEVEL
Back in the 1800s, “dashboard” was the name given to a “board” placed at the front of a carriage to stop mud from “dashing” against the passenges in the carriage, mud that was kicked up by the hoofs of the horses. Quite interesting …

21. “I, the Jury” detective : MIKE HAMMER
Mike Hammer is the protagonist in a series of private detective novels by Mickey Spillane. The novels have been adapted for radio, television and the big screen. The actor most associated with Mike Hammer is Stacy Keach, who played the role in the TV series “Mickey Spillane’s Mike Hammer” from 1984 to 1987.

“I, The Jury” is the first novel in the “Mike Hammer” series written by Mickey Spillane. The story was filmed twice, once in 1953 with Biff Elliot playing Hammer, and again in 1982 with Armand Assante taking the lead.

23. Big name in art glass : STEUBEN
Steuben Glass Works was a manufacturer of art glass that was founded in 1903 and was shut down not so long ago, in 2011. The glass factory was located in Corning, New York. The city of Corning is in Steuben County, giving the company its name.

25. Comic Caesar : SID
Sid Caesar achieved fame in the fifties on TV’s “Your Show of Shows”. To be honest, I know Sid Caesar mainly from the fun film version of the musical “Grease”, in which he played Coach Calhoun.

26. Thanksgiving side dish : YAM
Although in the US we sometimes refer to sweet potatoes as “yams”, the yam is actually a completely different family of plants. True yams are more common in other parts of the the world than they are in this country, and are especially found in Africa.

38. Asia’s shrunken ___ Sea : ARAL
The Aral Sea is a great example of how man can have a devastating effect on his environment. In the early sixties the Aral Sea covered 68,000 square miles of Central Asia. Soviet Union irrigation projects drained the lake to such an extent that today the total area is less than 7,000 square miles, with 90% of the lake now completely dry. Sad …

42. British fellow : BLOKE
A “bloke” in Britain is a chap, a fellow. The origin of the term seems to be unclear.

49. Pres. Lincoln : ABE
There is a story that just before Abraham Lincoln was elected president in 1860, he received a letter from a 12-year-old girl who criticized Lincoln’s appearance and his pock-marked, gaunt face. The little girl, Grace Bedell from New York, promised to get her brothers to vote for Lincoln if he would just grow a beard. However, Lincoln waited until after the election to grow his famous whiskers, a distinctive look that would forever be associated with his presidency.

50. Pop singer Carly ___ Jepsen : RAE
Carly Rae Jepsen is a singer/songwriter from Mission, British Columbia. Jepsen got her start on TV’s “Canadian Idol” when she placed third in the show’s fifth season.

56. Fashion magazine with a French name : ELLE
“Elle” magazine was founded in 1945 in France and today has the highest circulation of any fashion magazine in the world. “Elle” is the French word for “she”.

60. Laura and Bruce of the silver screen : DERNS
The actress Laura Dern is the daughter of the actors Bruce Dern and Diane Ladd. Among her many notable roles, Dern played the Florida Secretary of State Katherine Harris in the 2008 movie “Recount”, and Dr. Ellie Sattler in the 1993 blockbuster “Jurassic Park”.

Bruce Dern is a Hollywood actor with quite a pedigree. Dern is the grandchild of former Utah governor and Secretary of War, George Henry Dern. Bruce’s godparents were Adlai Stevenson and Eleanor Roosevelt!

62. Cambodia’s Lon ___ : NOL
Lon Nol was a soldier and politician in Cambodia, later serving twice as the country’s president. When the Khmer Rouge took over Cambodia in 1975, Nol escaped the country to Indonesia. He eventually found a home in Fullerton, California, where he died in 1985.

Down
2. Canadian police officer : MOUNTIE
The Royal Canadian Mounted Police (the Mounties; RCMP) is an unusual police force in that it provides all policing for the whole country. The RCMP works on the national level, and right down to the municipal level. The force’s distinctive uniform of red serge tunic, blue pants with a yellow stripe, stetson hat etc. is known internally as “Review Order”. The red uniform dates back to the days of the North-West Mounted Police, which was one of the existing forces that were merged in 1920 to form the RCMP.

6. “Deathtrap” playwright Ira : LEVIN
As well as writing novels, Ira Levin was a dramatist and a songwriter. Levin’s first novel was “A Kiss Before Dying”, and his most famous work was “Rosemary’s Baby” which became a Hollywood hit. His best known play is “Deathtrap”, a production that is often seen in local theater (I’ve seen it a couple of times around here). “Deathtrap” was also was a successful movie, starring Michael Caine and Christopher Reeve. My favorite of Levin’s novels though are “The Boys from Brazil” and “The Stepford Wives”.

7. Book before Daniel: Abbr. : EZEK
The Book of Daniel in the Hebrew Bible tells mainly of the life of Daniel. The Book of Ezekiel is a collection of the preachings of the prophet Ezekiel.

10. Biblical name for Syria : ARAM
The ancient Biblical land of Aram was named after Aram, a grandson of Noah. Aram was located in the center of modern-day Syria.

18. Singer with the #1 R&B hit “You’ll Never Find Another Love Like Mine” : LOU RAWLS
Lou Rawls was an American soul and blues singer known for his smooth vocal style. With his singing career well on the way, Rawls was asked to sing “The Star Spangled Banner” in 1977 at a Muhammad Ali fight in Madison Square Garden. This early performance led to him being asked to sing the anthem many, many times in the coming years with his last rendition being at a World Series game in 2005. Rawls passed away in January of the following year.

22. Zoo heavyweight, for short : HIPPO
The name “hippopotamus” comes from the Greek for “river horse”. Hippos are the third largest land mammals, after elephants and rhinos. The closest living relatives to hippos don’t even live on land. They are the whales and porpoises of the oceans.

24. Top 10 Kiss hit with backing by the New York Philharmonic : BETH
KISS is a hard rock band from New York City. KISS is the group whose bandmembers use all that scary face paint and wear wacky outfits on stage.

31. Springfield resident Disco ___ : STU
On television’s “The Simpsons”, the character of Disco Stu is voiced by Hank Azaria, although Stu was voiced for a while by Phil Hartman. Disco Stu is described as “a black, wrinkly John Travolta”.

37. Lead-in to “di” or “da” in a Beatles song : OB-LA-
“Ob-La-Di, Ob-La-Da” was one of many songs credited to Lennon/McCartney that was actually written by just one of the pair. Paul McCartney wrote this one, a song that John Lennon really did not like at all. Apparently Lennon was quite obstructionist during the recording of the song and even walked out at one point.

38. With ice cream : A LA MODE
In French, “à la mode” simply means “fashionable”. In America, the term has come to describe a way of serving pie, usually with ice cream, or as I recall from when I lived in Upstate New York, with cheese.

45. Actress Getty of “The Golden Girls” : ESTELLE
The actress Estelle Getty was best known for playing Sophia Petrillo on “The Golden Girls”. Bea Arthur played Sophia’s daughter on the show, even though Estelle was actually a year younger than Bea in real life!

48. Edam or Brie : CHEESE
Edam cheese takes its name from the Dutch town of Edam in North Holland. The cheese is famous for its coating of red paraffin wax, a layer of protection that helps Edam travel well and prevents spoiling. You might occasionally come across an Edam cheese that is coated in black wax. The black color indicates that the underlying cheese has been aged for a minimum of 17 weeks.

Brie is a soft cheese, named after the French province of Brie where it originated.

51. Leprechaunlike : ELFIN
A leprechaun is a mischievous fairy in Irish folklore. Traditionally, leprechauns spend their days making shoes and hide all of their money in a pot of gold at the end of a rainbow. Our word “leprechaun” comes from the Irish name for such a sprite: “leipreachán”.

52. Against property, to a judge : IN REM
“In rem” translates from Latin as “in a thing”. In a lawsuit, an action is described as “in rem” if it is directed against some property. This would be the case if someone disputes ownership of a piece of land, for example. An action “in personam” on the other hand, is directed against a specific individual.

54. Poet ___ St. Vincent Millay : EDNA
Edna St. Vincent Millay was an American poet and playwright, the third woman to receive the Pulitzer Prize for Poetry (in 1923 for “The Ballad of the Harp-Weaver”). Millay was noted not only for her work, but also for the open arrangement that she and her husband had in their marriage. Millay took many lovers, including the poet George Dillon for whom she wrote a number of sonnets.

55. Opera with a slave girl : AIDA
“Aida” is the famous opera by Giuseppe Verdi, actually based on a scenario written by French Egyptologist Auguste Mariette, who also designed the costumes and stages for the opening performance. The opera was first performed in 1871 in an opera house in Cairo. In the storyline, Aida is an Ethiopian princess brought into Egypt as a slave. Radames is an Egyptian commander who falls in love with her, and then of course complications arise!

59. Drunk’s woe, informally : DTS
The episodes of delirium that can accompany withdrawal from alcohol are called Delirium Tremens (the DTs). The literal translation of this Latin phrase is “trembling madness”.