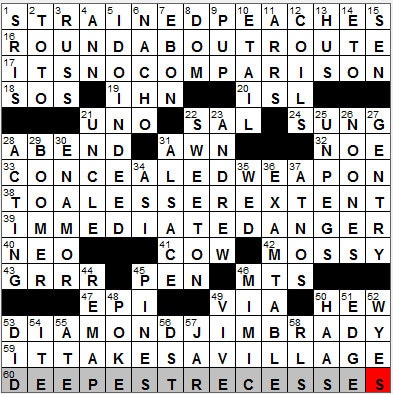 
Today’s Wiki-est, Amazonian Googlies
18. Plea before going under : SOS
The combination of three dots – three dashes – three dots, is a Morse signal first introduced by the German government as a standard distress call in 1905. The sequence is remembered as the letters SOS (three dots – pause – three dashes – pause – three dots), although in the emergency signal there is no pause between the dots and dashes, so SOS is in effect only a mnemonic. Similarly, the phrases “Save Our Souls” and “Save Our Ship” are also mnemonics, introduced after the “SOS” signal was adopted.

19. Him, in Hamburg : IHN
Hamburg is the second largest city in Germany, and the third largest port in Europe.

22. Paradise in literature : SAL
Jack Kerouac’s “On the Road” is largely autobiographical, telling the story of Sal Paradise (Jack K.) and the road trips that he and his friends took across the country in the fifties.

31. Beard growing out of an ear : AWN
Awn is the name given to hair or bristle-like structures found in numerous species of plants. In some species, like barley, the awns can contain photosynthetic tissue.

32. San Francisco’s ___ Valley : NOE
Noe Valley is a neighborhood in San Francisco. The area is named after José de Jesús Noé who was the last Mexican mayor of Yerba Buena, which is what San Francisco was called when it was part of Mexico.

40. Gothic leader? : NEO-
The Neo-Gothic architectural movement is also known as Gothic Revival. It is a movement that began in England in the 1740’s, and was one that called for revival of medieval forms.

41. Push around : COW
The verb “to cow” means to intimidate, to scare. The exact etymology of the term seems unclear.

42. Very conservative : MOSSY
Something that is “mossy” is old-fashioned, antiquated.

47. Prefix with central : EPI-
The “epicenter” is that point on the surface of the earth which is directly above the focus of an earthquake.

53. Tycoon who was the first person in New York City to own a car : DIAMOND JIM BRADY
The Gilded Age was a term coined by Mark Twain and Charles Dudley Warner in a book they wrote together. It describes the period of growth in the economy and the population following the Civil War. One of the men to profit during this time of expansion was Diamond Jim Brady. Brady started out as a bellboy and messenger, but at a young age made his fortune. He was known for having a big appetite for jewels (hence the moniker “Diamond Jim”), as well as a huge appetite for food. One restaurateur described him as “the best 25 customers I ever had”.

59. Best seller that begins “Children are not rugged individualists” : IT TAKES A VILLAGE
“It Takes a Village: And Other Lessons Children Teach Us” is a book published by Hillary Rodham Clinton. The title is taken from an African proverb, “It takes a village to raise a child”, although the exact origin of the phrase has been called into question. The actual text of the book was written by a ghost writer who interviewed Hillary Clinton while working on the project.

Down
1. Eastern titles : SRIS
“Sri” is a title of respect for a male in India.

3. Hodges who called baseball’s “shot heard ’round the world” : RUSS
Russ Hodges was a broadcaster who did play-by-play commentary for the San Francisco Giants, including the days when the franchise was based in New York. Hodges was calling the 1951 game which featured Bobby Thomson’s “Shot Hear ‘Round the World” which won the pennant for the New York Giants. Hodges then uttered the words “The Giants win the pennant! The Giants win the pennant!”

4. Fay’s “King Kong” role : ANN
“King Kong” really is a classic movie. It stars Fay Wray as the young woman (Ann Darrow) for whom Kong falls. Apparently Wray was very interested in the role as she was told she would be playing opposite the “tallest, darkest leading man in Hollywood”. She thought it might be Clark Gable. Boy was she wrong …

7. Jet : EBON
Ebony is another word for the color black (often shortened to “ebon” in poetry). Ebony is a dark black wood that is very dense, one of the few types of wood that sinks in water. Ebony has been in high demand so the species of trees yielding the wood are now considered threatened. It is in such short supply that unscrupulous vendors have been known to darken lighter woods with shoe polish to look like ebony, so be warned …

8. Title in an order : DOM
The word “Dom” is used in the Roman Catholic Church as a title for some monks, including those in the Benedictine order.

10. Net sales : ETAIL
“Etail” is the term used these days for online shopping. Etail is often compared to regular shopping in the “real world” by juxtaposing it with a “brick and mortar” store.

13. Czech martyr Jan : HUS
Jan Hus was Czech priest, famous today for having been burnt at the stake in 1415 as he was deemed guilty of heresy against the Catholic Church. Hus was an important contributor to Protestantism, over 100 years before Martin Luther made his famous proclamations.

Omar Bradley graduated from West Point in the class of 1915, along with Dwight Eisenhower who also attained the rank of General of the Army. Bradley was the last person to hold the rank of a five-star commissioned officer, and he was the first general to serve as Chairman of the Joint Chiefs of Staff. I was struck by a quotation from Bradley from later in his life:
Ours is a world of nuclear giants and ethical infants. We know more about war than about peace, more about killing than we know about living.

21. Man in a tree? : UNCLE
An uncle might be found in an ancestral tree.

23. Name shared by two U.S. presidents : ANDREW
Like many of the earlier US presidents, Andrew Jackson was a career military man. He distinguished himself as commander of American forces during the War of 1812, particularly in the defense of New Orleans. He had a reputation of being fair to his troops, but strict. It was during this time that he was described as “tough as old hickory”, creating a nickname that stuck with him for life.

29. New arrival of the 1950s? : BOOMER
A baby boomer is someone who was born in the post-WWII baby boom. The rate of births had been falling fairly steadily in the US at least since 1900, but this trend was sharply reversed in 1946 after WWII. The higher birth rate continued until 1964, when it returned to pre-war levels. Since then the birth rate has continued to decline, although at a slower pace. The period between 1946 and 1964 is defined as the “baby boom”.

31. It shares a border with Switzerland : ALSACE
Alsace is home to Strasbourg, a beautiful city that I had the privilege to visit some years ago. Strasbourg is home to many international organizations, including the European Court of Human Rights.

37. Periodic law figs. : AT NOS
The atomic number of an element is also called the proton number, and is the number of protons found in the nucleus of each atom of the element.

Dmitri Mendeleev was a Russian chemist. When Mendeleev classified elements according to their chemical properties, he noticed patterns and was able to group elements into his famous 1869 Periodic Table. So powerful was his table that he actually predicted the properties of some elements that had not even been discovered in 1869. Appropriately enough, element number 101, mendelevium, was named after Mendeleev.

48. Dawdle : POKE
One of the many meanings of the verb “to poke” is to proceed in a lazy manner, to putter along.

50. 2009 Wimbledon semifinalist Tommy : HAAS
Tommy Haas is German-American tennis player. He grew up in Hamburg and, like many promising tennis players, moved to Florida to develop his tennis skills, at the age of 13.

56. Syst. first implemented during W.W. I : DST
On the other side of the Atlantic, Daylight Saving Time (DST) is known as “summer time”. The idea behind summer/daylight-savings is to move clocks forward an hour in spring and backwards in the fall so that afternoons have more daylight.

58. Inits. of Ben Gunn’s creator : RLS
In Robert Louis Stevenson’s “Treasure Island”, Ben Gunn is a character who had been marooned on the island by his shipmates and who had lived there for three long years when Jim Hawkins comes across him. Author R. F. Delderfield wrote a “prequel” to “Treasure Island” called “The Adventures of Ben Gunn” telling the story of Gunn, a parson’s son that turned pirate.