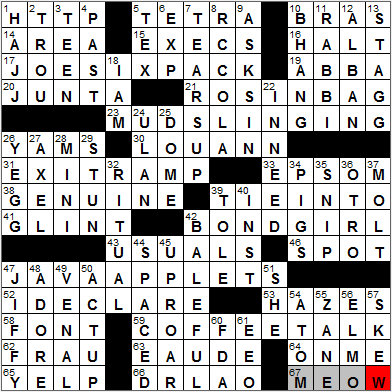 CROSSWORD SETTER: Joon Pahk
THEME: COFFEE TALK … all of the theme answers are common expressions that contain a word that can be used for “coffee”:

17A. Large order of morning drinks? : “JOE” SIX-PACK
23A. Activity for a hyperactive barista? : “MUD” SLINGING
47A. Interactive features of starbucks.com? : “JAVA” APPLETS
59A. Classic Mike Myers “S.N.L.” sketch … or an apt title for this puzzle : COFFEE TALK


Today’s Wiki-est, Amazonian Googlies
Across
1. Start of a URL : HTTP
“http” are the first letters in most Internet links. “http” stands for HyperText Transfer Protocol.

5. Neon ___ (fish) : TETRA
The neon tetra is a freshwater fish, native to parts of South America. It is a very popular aquarium fish, and millions are imported into the US every year. Almost all of the imported tetras are farm-raised in Asia, and very few come from their native continent.

10. They’re hooked behind the back : BRAS
The word “brassière” is of course French in origin, but it isn’t the word the French use for a “bra”. In France what we call a bra is a “soutien-gorge”, translating to “held under the neck”. The word “brassière” is indeed used in France but it applies to a baby’s undershirt, a lifebelt or a harness. “Brassière” comes from the Old French word for an “arm protector” in a military uniform (“bras” is the French for “arm”). Later “brassière” came to mean “breast plate” and from there was used for a type of woman’s corset. The word jumped into English around 1900.

17. Large order of morning drinks? : JOE SIX-PACK
“Joe Six-Pack” has been a term used to describe “the average Joe”, the man in the street, since the mid-seventies. The idea is that the ordinary man supposedly loves his six-pack of beer.

19. 1970s-’80s group with a palindromic name : ABBA
I am an unapologetic fan of ABBA’s music. ABBA was of course the Swedish group that topped the charts in the seventies and eighties. The name ABBA is an acronym formed from the first letters of the given names of each of the band members, namely: Agnetha, Benny, Bjorn and Anni-Frid.

20. Interim ruling group : JUNTA
A junta is a group of military officers that rule a country, usually after having seized power forcibly. “Junta” is a Spanish word meaning “council”.

23. Activity for a hyperactive barista? : MUD SLINGING
The person who serves coffee in a coffee shop is often called a “barista”. “Barista” is the Italian for “bartender”.

26. Vegetables whose skins may be cooked and eaten separately : YAMS
Although in the US we sometimes refer to sweet potatoes as “yams”, the yam is actually a completely different family of plant. True yams are more common in other parts of the the world than they are in this country, especially Africa.

30. Gomer Pyle’s girlfriend : LOU-ANN
Jim Nabors was discovered by Andy Griffth and brought onto “The Andy Griffith Show” as Gomer Pyle, the gas station attendant. Of course, Nabors then got his own show, “Gomer Pyle, U.S.M.C.” On the new show, Gomer had a girlfriend, Lou-Ann Poovie, played by Elizabeth Macrae.

33. English racing town : EPSOM
Epsom is most famous for its racecourse, at which is run the Epsom Derby every year, one of the three races that make up the English Triple Crown. You might also have heard of Epsom salts. Epsom salts are magnesium sulfate, originally prepared by boiling down mineral waters (Epsom was indeed a spa town at one time).

38. Bona fide : GENUINE
Bona fide(s), translates from the Latin as “in good faith”, and is used to indicate honest intentions. It can also mean that something is authentic, like a piece of art that is represented in good faith as being genuine.

47. Interactive features of starbucks.com? : JAVA APPLETS
“Applet” is the name given to a small application that runs within another, larger program.

63. ___ cologne : EAU DE
Back in 1709, an Italian perfume-maker moved to Cologne in Germany. There he invented a new fragrance that he named Eau de Cologne after his newly adopted hometown. The fragrance is still produced in Cologne, using a secret formulation. However, the terms Eau de Cologne and cologne, are now used generically.

66. Tony Randall title role : DR LAO
“The Circus of Dr. Lao” is a novel by Charles G. Finney, first published in 1935. There was a famous film adaptation released in 1964 called “7 Faces of Dr. Lao” starring Tony Randall in the title role. Randall wasn’t the first choice, as the director wanted Peter Sellers for the part. However, MGM insisted on an American lead, and a great choice it turned out to be.

Down
1. Pilgrimage to Mecca : HAJJ
A Haji is the term used for someone who has made a pilgrimage to Mecca, and it is sometimes also used as a form of address for such a person. The journey itself goes by the name “haj” or “hajj”.

10. Hallucinogenic beverage : BHANG
Bhang is a beverage made from the leaves and flower buds of the female cannabis plant. It is quite popular, and legal, in India and Pakistan.

11. Yeshiva instructor : RABBI
In the Jewish tradition a yeshiva is an educational institution focusing on the study of sacred texts.

12. Composer Berg : ALBAN
Alban Berg was a composer from Austria. He was one of the members of what is called the Second Viennese School, along with Arnold Schoenberg and Anton Weber. This group embraced the concept of atonality, something which frankly is beyond me …

24. ___ Bator : ULAN
The name “Ulan Bator” translates from Mongolian as “the Red Hero”, and is Mongolia’s capital city. Ulan Bator lies north of the Gobi Desert.

25. ___ of the Rock (Jerusalem landmark) : DOME
The Dome of the Rock is a beautiful Islamic mosque located on the Temple Mount in the Old City of Jerusalem. The golden dome, which gives the structure its name, was refurbished in 1993 using $8.2 million gifted by King Hussein of Jordan. Apparently King Hussein sold one of his houses in London in order to fund the 80 kg of gold required for the project.

26. Burglar who really gets cracking? : YEGG
Yegg is a slang word for a burglar, and in particular a safe-cracker. The origin of the term appears to be unknown.

27. Jump with an extra half-turn : AXEL
An Axel is a forward take-off jump in figure skating. It was first performed by Norwegian Axel Paulsen at the 1882 World Figure Skating championships.

28. It’s bigger than a Nano : MINI
The iPod Nano is the successor to the iPod Mini, and was introduced to the market at the end of 2005. There have been five versions of the Nano to date and the current Nano as well as playing tunes is an FM player, records voice memos, and even has a pedometer!

29. “Set phasers to ___” : STUN
A MASER is a device that was around long before LASERs came into the public consciousness. A MASER (Microwave Amplification by Stimulated Emission of Radiation) is similar to a LASER, but microwaves are emitted rather than light waves. When the storyline for “Star Trek” was being developed, the writers introduced a weapon called a “phaser”, with the name “phaser” derived from PHoton mASER. So, now we know …

34. Napoleon and Snowball, in “Animal Farm” : PIGS
“Animal Farm” is the 1945 novella written by George Orwell, a satire of life in the Soviet Union under Joseph Stalin. Orwell had trouble getting his novel published in his homeland of the UK during WWII, as anti-Soviet literature wasn’t a good thing to publish while the UK and USSR were on the same side of a World War. In fact, one publisher who was willing to distribute the book changed his mind after being warned off by the British Ministry of Information. Given his experiences, I find it interesting that Orwell should write “Nineteen Eight-Four” a few years later, and introduce the world to Big Brother.

35. Do a little barbering : SNIP
Our word “barber” comes to us from Latin via French. “Barba” is the Latin for “beard”.

39. Lacquered metalware : TOLE
Tole is metalware that has been lacquered or enameled, and usually painted or gilded. “Tôle” is the French word for “sheet metal”.

40. The “I” of R.P.I.: Abbr. : INST
The Rensselaer Polytechnic Institute (RPI) is a private school in Troy, New York. The university is named after its founder Stephen Van Rensselaer who set up the school in 1824. The goal of RPI has always been the “application of science to the common purposes of life”, an objective set by the founder. Given that, the name for the sports teams is quite apt … the Engineers.

55. Western writer Grey : ZANE
Zane Grey sure did hit on the right niche. He wrote romanticized western novels and stories that really lent themselves to the big screen in the days when westerns were very popular movies. Incredibly, 110 films were made based on his work.

56. Patron saint of sailors : ELMO
St. Elmo is the patron saint of sailors. He lends his name to the electrostatic weather phenomenon (often seen at sea) known as St. Elmo’s fire. The “fire” is actually a plasma discharge caused by air ionizing at the end of a pointed object (like the mast of a ship), and is often observed during electrical storms.

61. Fair-hiring abbr. : EEO
Equal Employment Opportunity (EEO) is a term that has been around since 1964 when the Equal Employment Commission was set up by the Civil Rights Act.