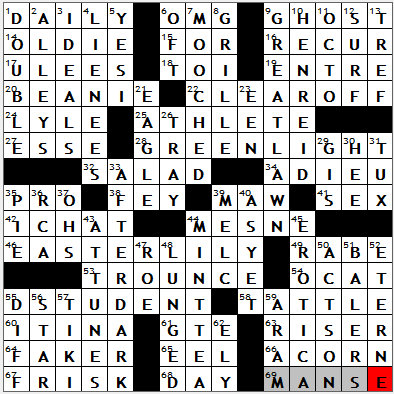 CROSSWORD SETTER: Bill Thompson
THEME: The Day After and the Day Before … all of the theme answers are two-word expressions in which “day” can follow the first word, and day can precede the second:


Today’s Wiki-est, Amazonian Googlies
Across
1. With 1-Down, “Jeopardy!” feature : DAILY
1. See 1-Across : DOUBLE
“Jeopardy” first went on the air in 1964, and is another successful Merv Griffin creation. But it took the introduction of Alex Trebek as host in order to bring the show into the big times. Trebek has been host since 1984.

17. “___ Gold” (Fonda film) : ULEE’S
“Ulee’s Gold” is a highly respected film from 1997 in which Peter Fonda plays the title role of Ulee. Ulee’s “gold” is the honey that Ulee produced. It is a favorite role for Peter Fonda, and he has shared that the role brought into mind his father, Henry Fonda, who himself kept a couple of hives. So if you see Peter Fonda in “Ulee’s Gold”, you’re witnessing some characteristics that Peter saw in his father.

18. You, on the Riviera : TOI
“Toi” is the French word for “you”, when talking to someone with whom you are familiar.

The Côte d’Azur is on the Mediterranean coast of France and stretches from Saint Tropez in the west and to the Italian border in the east. In English we often refer to the area as the French Riviera. It’s a little crowded for me (okay, “expensive”), especially in the summer
.
19. ___ nous : ENTRE
“Entre nous” is French for “between us”.

20. Cousin of a yarmulke : BEANIE
A yarmulke is a skullcap worn in the Orthodox Jewish tradition, and is also known as a kippa or hech cap.

24. Julia Roberts ex ___ Lovett : LYLE
As well as being famous in his own right as a successful country singer, Lyle Lovett is known for his marriage to the actress Julia Roberts in 1993. The pair had a whirlwind romance lasting just three weeks before they eloped and were wed. The marriage was also relatively whirlwind, lasting less than two years.

25. One often depicted on a Wheaties box : ATHLETE
Wheaties were introduced to the world in 1924. The idea of mixing wheat and bran together into a cereal was the result of an accidental spill of wheat bran into a stove. The product was first called Washburn’s Gold Medal Whole Wheat Flakes, and this was changed to Wheaties after an employee contest to find a better name.

27. “To be,” to Brutus : ESSE
The most famous man with the name “Brutus” in Ancient Rome was Marcus Junius Brutus the Younger. It was this Brutus that Julius Caesar turned to when he was assassinated on the steps of the Senate. William Shakespeare immortalized Brutus by featuring him in his play, “Julius Caesar”, and giving his victim the line “Et tu, Brute?” (“And you, Brutus?”).

34. Parting word : ADIEU
“Adieu” is the French for “goodbye”, or “farewell”, from “à Dieu” meaning “to God”, although it is also used in English.

38. Palin parodist Tina : FEY
I was shocked to read that Tina Fey has a scar on her face, a few inches long on her left cheek, the result of a childhood “slashing” incident. When she was just five years old, playing in the front yard of her house, someone just came up to her and slashed her with a knife. How despicable!

42. Apple messaging software : ICHAT
iChat was introduced in 2002, and is still in use today. It’s the “instant messaging” application that integrates with the Mac Operating System.

44. Intermediate, in law : MESNE
Mesne is a legal term describing perhaps an intermediate or intervening step in a process.

49. Broccoli ___ : RABE
Broccoli Rabe is perhaps better known as rapini, and is a vegetable often used in Mediterranean cuisines. It is quite delicious sauteed with garlic …

54. One-___ (old ball game) : O’CAT
One o’cat, or more properly “one old cat”, is an abbreviated form of baseball with a home plate and just one base.

55. One with a 1.0 G.P.A. : D STUDENT (D-Day & day student)
The most famous D-Day in history was June 6, 1944, the date of the Normandy landings in WWII. The term “D-Day” is used in the military to designate the day on which a combat operation is to be launched, especially when the actual date has yet to be determined. What D stands for seems to have been lost in the mists of time although the tradition is that it just stands for “Day”. In fact, the French have a similar term, “Jour J” (Day J), with a similar meaning. We also use H-Hour to denote the hour the attack is to commence.

60. Rocker Turner’s autobiography : I, TINA
Tina Turner is actually a stage name, used by Anna Mae Bullock, the “Queen of Rock ‘n’ Roll”. Turner has always loved Europe, and moved there in the eighties. She now splits her time between her homes in England, France and Switzerland.

61. Old telecom giant : GTE
GTE was a rival to AT&T, the largest of the independent competitors to the Bell System. GTE merged with Bell Atlantic in 2000, forming the company that we know today as Verizon.

64. Possum player : FAKER
The idiom “playing possum” means pretending to be dead. The phrase is used in recognition of the behavior of the Virginia Opossum who does just that, plays dead as a defense mechanism.

65. Unagi, at a sushi bar : EEL
Unagi is the Japanese word for freshwater eel.

66. Nut with a cupule : ACORN
A cupule is that “cup” on the base of an acorn, in which the nut sits.

2. Bowling lanes : ALLEYS
Bowling has been around for an awfully long time. The oldest known reference to the game is in Egypt, where pins and balls were found in an ancient tomb that is over 5,000 years old. The first form of the game to come to America was nine-pin bowling, which had been very popular in Europe for centuries. In 1841 in Connecticut, nine-pin bowling was banned due to its association with gambling. Supposedly, an additional pin was added to get around the ban, and ten-pin bowling was born.

4. People with mortgages, e.g. : LIENEES
A lien is the right that one has to retain/secure someone’s property until a debt is paid.

9. Central Park concert site : GREAT LAWN
The Great Lawn and nearby Turtle Pond are well-known features in Central Park in New York City. The lawn almost turned into a dustbowl due to overuse in the fifties through the nineties. Conservation efforts have helped the area recover in recent years.

13. Not kosher : TREF
According to Jewish dietary law, kosher food is “fit” to eat, and food that is not kosher is called treif (or tref).

21. Feature of old quarters : EAGLE
The American quarter is a little unusual in the world of decimal currency if you think about it. Most currencies have a “20-cent” coin, easier to work with mathematically. The US went for the quarter in deference to the practice of dividing Spanish Milled Dollars into eight wedge-shaped “bits”. That’s also why the quarter is sometimes referred to as “two bits”. State quarters were introduced in 1999, but prior to that the quarter had an eagle on its reverse.

29. M.R.E. eaters : GIS
The Meal, Ready-to-Eat (MRE) comes in a lightweight package, easier to tote around. It replaced the more cumbersome Meal, Combat, Individual (MCI) in 1981, a meal-in-a-can. In turn, the MCI had replaced the C-ration in 1958, a less sophisticated meal-in-a-can with a more limited choice.

31. Guy’s prom rental : TUX
The style of men’s evening dress called a “tuxedo” was apparently first worn to a country club event in 1886 in New York. The use of a dark dinner jacket, without tails, became fashionable at the club with the members, and the tradition spread from there. The country club was located in Tuxedo Park, New York, giving the style of dress its name.

36. “His Master’s Voice” co. : RCA
Nipper is the name of the dog that appeared in the RCA logo. Nipper was a real dog, actually from England. Nipper’s owner, Francis Barraud, made a painting of him listening to a gramophone. He then approached several gramophone manufacturers in the hope they would be interested in using the image for advertising. It was indeed picked up, and around that time it was Barraud himself who came up with the slogan “His Master’s Voice”.

47. ___ v. Wade : ROE
Roe v. Wade was decided in a US District Court in Texas in 1970, and reached the Supreme Court on appeal. The basic decision by the Supreme Court was that a woman’s constitutional right to privacy applied to an abortion, but that this right had to be balanced with a state’s interest in protecting an unborn child, and a mother’s health. The Court further defined that the state’s interest became stronger with each trimester of a pregnancy. So, in the first trimester, the woman’s right to privacy outweighed any state interest. In the second trimester, the state’s interest in maternal health was deemed to be strong enough to allow state regulation of abortion for the sake of the mother. In the third trimester, the viability of the fetus dictated that the state’s interest in the unborn child came into play, so states could regulate or prohibit abortions, except in cases where the mother’s life was in danger. I’m no lawyer, but that’s my understanding of the initial Supreme Court decision …

56. Milky Way unit : STAR
The Milky Way is the name given to our own galaxy, the home to the Solar System. The word “galaxy” comes from the Greek “galaxias” meaning “milky”.

57. Polynesian carving : TIKI
Tiki are the large wood and stone carvings that are found in Polynesian cultures. Tiki are used to mark the boundaries of sacred sites.

59. Ancient Syria : ARAM
The ancient Biblical land of Aram was named after Aram, a grandson of Noah. Aram was located in the center of modern-day Syria.

62. English cathedral town : ELY
Ely Cathedral is a famous and beautiful church in the city of Ely in the county of Cambridgeshire. There is a Gothic door on the north face of the cathedral that was designed by Sir Christopher Wren, the man famous as the architect of St. Paul’s Cathedral in London. Christopher Wren had a personal link to the church, as his uncle was the Bishop of Ely.