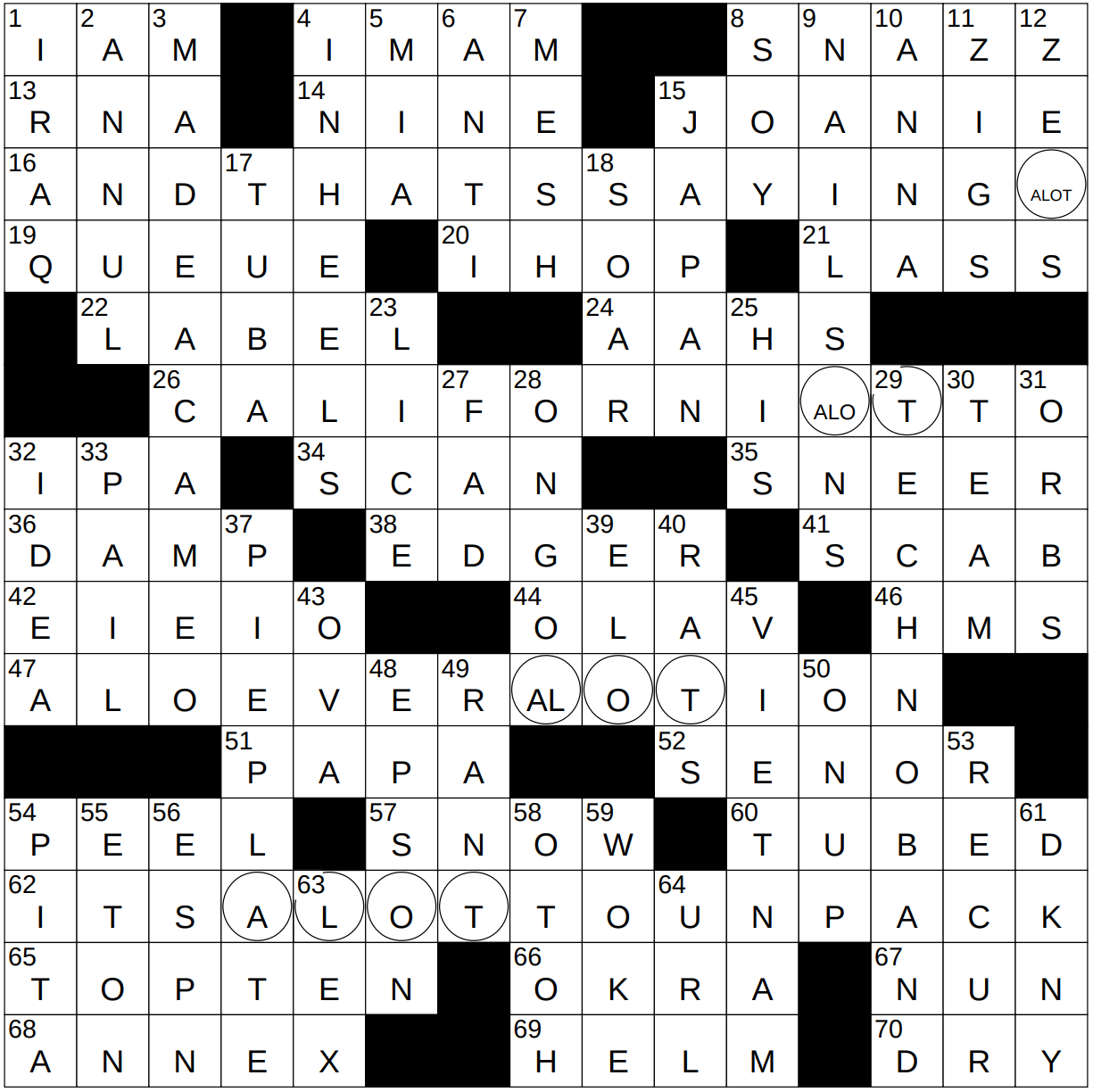 Circled letters in the grid contain the letters “A LOT”, and these letters get UNPACKED as we descend the grid:

The Koran is also known as the “Qur’an” and “Quran” in English. “Qur’an” a transliteration of the Arabic name for the holy text of the Muslim faith. The literal translation of “Koran” is “the recitation”.

13 Molecule in some modern vaccines : RNA

Erin Moran was an actress most famous for playing Joanie Cunningham on “Happy Days” and on the resulting (short-lived) spin-off sitcom called “Joanie Loves Chachi”. Long before she got her big break in “Happy Days”, Moran played Jenny Jones on the children’s drama “Daktari” from the late sixties.

26 Contest for millions on the West Coast : CALIFORNIA LOTTO

3 Appeared briefly : MADE A CAMEO

4 How many salsa dancers dance : IN HEELS

15 “Homeland” of the monsters Mothra and Gamera : JAPAN

Mothra is a giant moth-like monster that made its big-screen debut in the 1961 film “Mothra”. Mothra turns up quite often in “Godzilla” movies.

Techno is a type of electronic dance music that originated in Detroit in the eighties. Techno involves a heavy beat in common time, and what seems to be a lot of repetition. Not for me …

“Out of the Blue” is a double album released in 1977 by ELO. All the tracks were written by band leader Jeff Lynne in just three weeks, in a rented chalet in the Swiss Alps. A creative environment, I guess …

“Get on Up” is a 2014 film about the life of soul singer James Brown, who is portrayed by Chadwick Boseman. Mick Jagger is one of the movie’s producers, and appears as a character on screen (played by Nick Eversman).

Tabbouleh is a Middle Eastern dish made from tomatoes, and chopped parsley, mint, bulgur and onion, along with olive oil, lemon juice and salt. The name “tabbouleh” comes from the Arabic “taabil” meaning “seasoning”. I love tabbouleh …

The town of Eton in Berkshire, England is home to the world-famous Eton College. The original settlement of Eton was located on an island surrounded by the River Thames, and the name “Eton” means “settlement on an island. A stream on one side of the island silted up almost 200 years ago, but it was cleared in 2019 so that Eton qualifies as an island once again.

Windsor Castle is located on the River Thames in Berkshire, just 20 miles outside London. It was built in the early 11th century by William the Conqueror after the Norman invasion of England. Queen Elizabeth II used to spend many of her weekends at Windsor. She had lots of room to move around there, as it’s the largest inhabited castle in the world.

56 Presenter of many games : ESPN

Lex Luthor is the nemesis of Superman in comics. Luthor has been portrayed in a number of guises in the comic world as well in movies and on the small screen. For example, he appeared as Atom Man in the 1950 film series “Atom Man vs. Superman”, and was played by actor Lyle Talbot, opposite Kirk Alyn’s Superman.