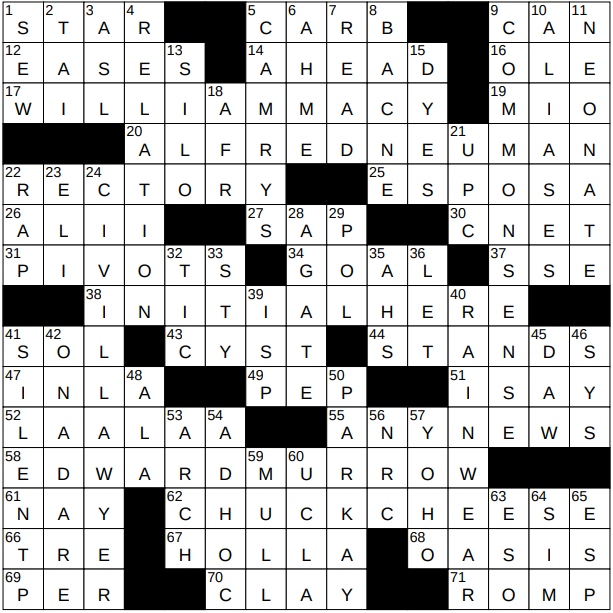 5 Quinoa or oats, for short : CARB

William H. Macy is a favorite actor of mine, and one who appears in several of my favorite movies, including “Fargo” and “Air Force One”. He is also magnificent in the US version of the British TV show “Shameless”. In 1997, Macy married fellow actor Felicity Huffman, someone found guilty of fraud in the infamous case about college admissions bribery. Macy was never charged.

Alfred E. Neuman is the mascot of “Mad” magazine, although the image of the smiling, jug-eared youth had been around for decades before the magazine. “Mad” first used the likeness in 1955, and young Mr. Neuman has appeared on the cover of almost every issue of the magazine since then. Neuman’s name was inspired by American composer Alfred Newman, a prolific writer of film scores.

Famed journalist and war correspondent Edward R. Murrow really came into the public eye during WWII with a series of radio broadcasts to the US from Europe. Notably, Murrow’s reporting and broadcasts contributed to the end of McCarthyism. The excellent George Clooney film “Good Night and Good Luck” explores the conflict between Murrow and Senator McCarthy.

Chuck E. Cheese is a sit-down pizza restaurant that features entertainment for children. The original Chuck E. Cheese’s Pizza Time Theatre was opened in San Jose, California in 1977 by founder Nolan Bushnell. Bushnell had already achieved success in the business world as the founder of Atari.

3 In which crossing one’s fingers makes the letter “R,” in brief : ASL

A neonate is a newborn infant.

Even though the game of marbles has been around since the early 1700s, the use of “marbles” meaning “one’s faculties, common sense”, probably has nothing to do with the game. Rather, the French word “meubles” meaning furniture, was brought into English as “marbles” in the mid-1800s to mean “personal effects, furniture”. It was “marbles” in this sense that evolved into “having one’s marbles”, a slang term from the late twenties meaning “having one’s faculties”.

39 Spectrum or Xfinity, for short : ISP

A slicker is a waterproof jacket or coat that is typically worn to protect the body from rain. Back in the mid-19th century, a slicker was a tool used for smoothing (slicking) leather. The term was adopted in the 1880s for a raincoat made from such leather. By 1900, a slicker was also a clever and crafty (slick) person.

50 Margarine whose ads once featured a talking tub : PARKAY

Parkay is a brand of margarine that was introduced in 1937. Parkay is one of the many food products that takes advantage of the success of lobbyists influencing the Food and Drug Administration. Parkay contains trans fats, but the amount is less than half a gram. The FDA allows manufacturers to report such levels as “0g of trans fat”. I tend to go for products that display the wording “no trans fats”.

A nuclear reactor (originally “atomic pile”) is a device designed to maintain a self-contained nuclear chain reaction. Nuclear fission generates heat in the reactor core. That heat is transferred out of the core by a nuclear reactor coolant, and is used to turn steam turbines. Those steam turbines usually drive electrical generators, or perhaps a ship’s propellers.