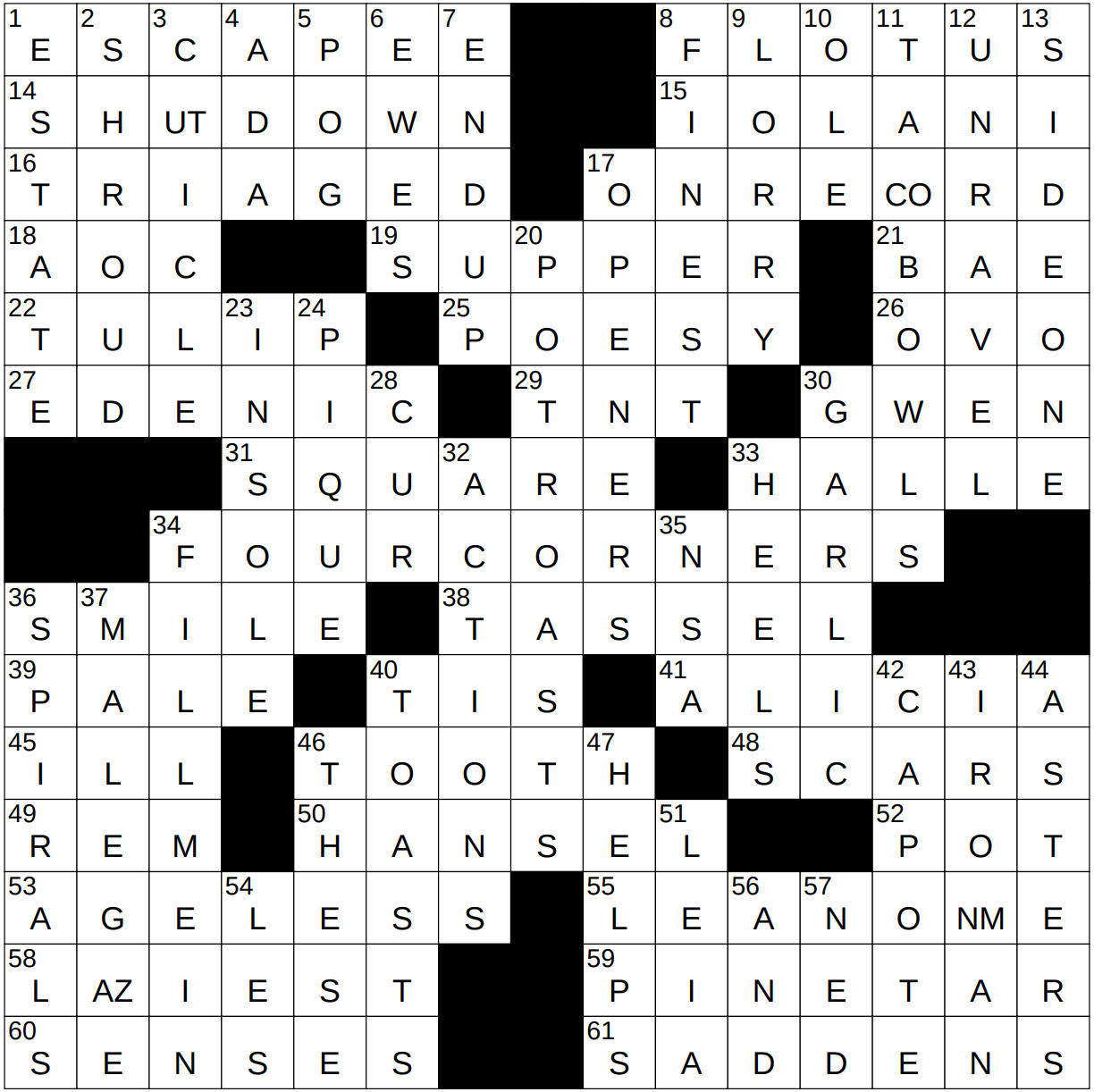 We have a rebus puzzle today. FOUR squares in the FOUR quadrants of the grid contain the postal codes for the FOUR states that meet in the FOUR CORNERS region of the US. Those states are:

Utah (UT)
When Mormon pioneers were settling what is today the state of Utah, they referred to the area as Deseret, a word that means “beehive” according to the Book of Mormon. Today Utah is known as the Beehive State and there is a beehive symbol on the Utah state flag. In 1959, “Industry” was even chosen as the state motto, for the term’s association with the beehive.

Colorado (CO)
The state of Colorado took its name from the prior Territory of Colorado that existed from 1861 to 1876. The name was chosen for the Colorado river that originated in the territory. The river in turn was named by the Spanish as “Rio Colorado”, meaning “ruddy, reddish river”.

Arizona (AZ)
Arizona was admitted as a Confederate Territory in February 1862, in a declaration signed by Confederate President Jefferson Davis. Almost exactly 50 years later, Arizona became the 48th state of the Union, on Valentine’s Day in 1912.

New Mexico (NM)
The region now covered by the US state of New Mexico (NMex) was known as “Nuevo México” at least since 1563. Spanish explorers gave the area this name due to an erroneous belief that it was home to a branch of the Mexica, an indigenous people living in the Valley of Mexico. So, the region has had the “New Mexico” name for centuries before the nation of Mexico adopted its name in 1821.

34A U.S. tourist locale that inspired this puzzle : FOUR CORNERS
The Four Corners region of the US surrounds the meeting point of the four states of Colorado, New Mexico, Arizona and Utah. The Four Corners is the only point in the US that is shared by four states.

16 Prioritized, in a way : TRIAGED

In the US Congress, the term “the Squad” was applied to four House Representatives elected in 2017 and who represent the more progressive side of the Democratic Party. The four original Squad members are Alexandria Ocasio-Cortez (New York), Ilhan Omar (Minnesota), Ayanna Pressley (Massachusetts), and Rashida Tlaib (Michigan). Soon after election day, the four took a group photo together after a live-streamed interview. Ocasio-Cortez published the picture on Instagram, and used the caption “Squad”. The label seems to have stuck since then.

22 Apt focus of an annual festival in Holland, Mich. : TULIP

Tulip festivals are held in a few cities around the world. The largest of these is the Canadian Tulip Festival that is held every year in the capital city of Ottawa. The tradition of growing tulips in Ottawa really started at the end of WWII. The Dutch royal family presented the city with 100,000 tulip bulbs as an act of thanks for having sheltered Princess Juliana and her children while the Nazis occupied the Netherlands. The first Canadian Tulip Festival took place in 1953.

The thread-like fibers that make up the tuft on an ear of corn is known as “corn silk”. The fibers are the female parts of the plant. Pollen from the tassel at the top of the plant lands on the fibers, which are actually fine tubes. The pollen travels down the tube, where fertilization occurs. Each fertilization results in the development of a kernel of corn.

The words “whet” and “pique” can both be used in the sense of sharpening, or awakening one’s interest or desire.

The term “male gaze” describes the act of depicting women in artistic works as sexual objects for the pleasure of maculine, heterosexual viewer. The male gaze can manifest itself as perhaps a man behind a camera in a movie, a male character in a story, or male spectators of a work.

57 “The Simpsons” character in a green sweater : NED

Ned Flanders lives next door to Homer Simpson on TV’s “The Simpsons”. Ned was married to Maude, with whom he had two children Rod and Todd. Maude died in an accident involving a T-shirt cannon. Ned is voiced by actor Harry Shearer, and has been around since the very first episode aired in 1989.