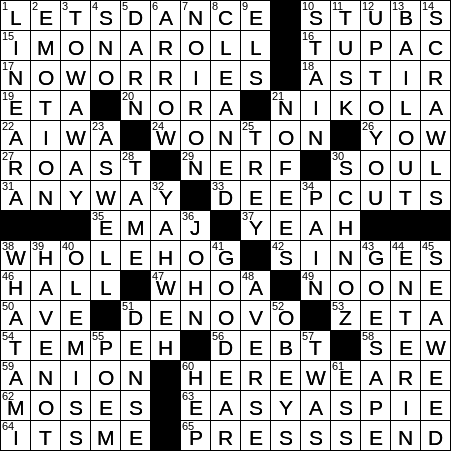 Constructed by: Sawyer Tabony & Ashton Anderson
Edited by: Will Shortz

A wonton is a dumpling used in Chinese cooking. Wontons are often boiled and served in a wonton soup.

“Schnoz(z)” is a slang term describing a nose, particularly a large one.

32 Name so sacred that some refuse to speak it : YAHWEH

“Tetragrammaton” is a Greek word meaning “consisting of four letters” It is the name given to the four-letter word in Hebrew for the name God. The four letters are usually translated into English as YHWH, with “Yahweh” used as the ancient pronunciation. Another pronunciation that has been used is “Jehovah”.