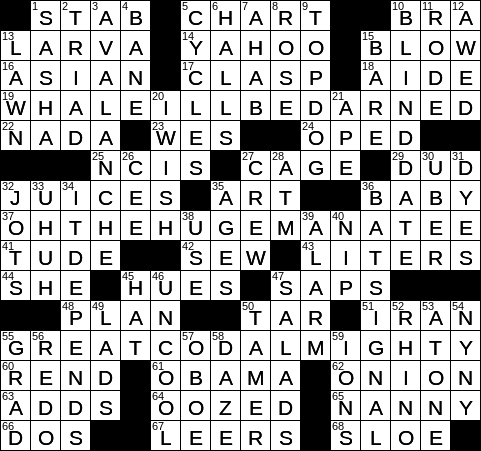 Today’s Theme (according to Bill): They Sound Fishy

Themed answers sound like common exclamations, but with a sea creature substituted:

“Turquoise” is the Old French word for “Turkish”. The name was given to the blue mineral because much of it was brought into Europe from Turkey, although most of the turquoise mines were located in the Khorasan Province of Iran.

The countries of Turkmenistan, Afghanistan and Pakistan lie along Iran’s northern and eastern borders.

In Britain and Ireland, the most common fish that is used in traditional “fish and chips” is Atlantic cod. Cod has been overfished all over the world, and is now considered to be an endangered species by many international bodies. Confrontations over fishing rights in the North Atlantic led to conflicts called “the Cod Wars” between Iceland and the UK in the 1950s and the 1970s, with fishing fleets being protected by naval vessels and even shots being fired.

Hair weaves are used to add length and body to hairstyles. Extensions, made from human or synthetic hair, are usually clipped, glued or sewn into natural hair to achieve the effect. Most of the human hair used in extensions comes from India and China, with a lot sourced from religious institutions. In some traditions, the believers shave their heads as an act of devotion, after which the temple sells the hair at auction.

6 Areas decked with holly in a holiday song : HALLS

7 Husband of Jezebel in the Bible : AHAB

Ahab was King of Israel, but the power behind his throne was his wife Jezebel, a Phoenician princess. Jezebel’s god was Ba’al, and she used her influence to get temples of Ba’al built in Israel. Jezebel’s name is still associated with the worship of false prophets.

Panama hats are traditional headgear from Ecuador, and have never been made in volume in Panama. The “panama” moniker came about as many of the hats were shipped to the Isthmus of Panama for transportation by sea to the rest of the world. Authentic panama hats are made from the leaves of a palm-like plant known locally as the jipijapa palm.