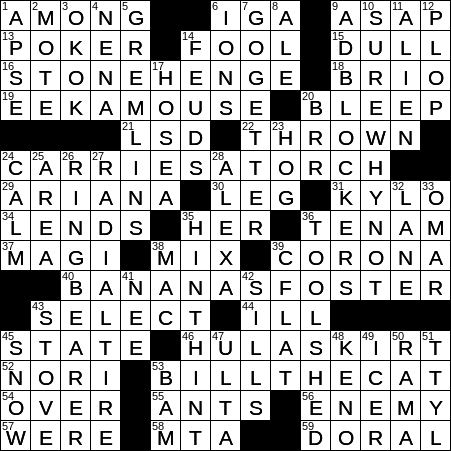 19 Pioneering reggae artist whose name is an exclamation : EEK-A-MOUSE

Eek-A-Mouse is a Jamaican reggae artist born Ripton Hylton. Hylton took the name “Eek-A-Mouse” from a racehorse, one on which he frequently placed bets.

45 Chihuahua is a Mexican one : STATE

“Bloom County” is a comic strip that originally ran from 1980 to 1989, and which was drawn by cartoonist Berkeley Breathed. Breathed resurrected the strip in 2015, distributing it via Facebook. The main protagonist in the storyline is Milo Bloom, a 10-year-old newspaper reporter.

The Doral Golf Resort in Doral, Florida has five championship golf courses, including one called the Blue Monster.

Michael Faraday was a scientist from England who discovered electromagnetic induction among other things. It was Faraday who first observed that a conductor carrying an electric current has an associated magnetic field. Amazingly, the sum total of Faraday’s formal education was little more than a seven-year apprenticeship as a bookbinder and bookseller.

11 Common character in “The Far Side” : ALIEN

24 Zero on the Beaufort scale : CALM