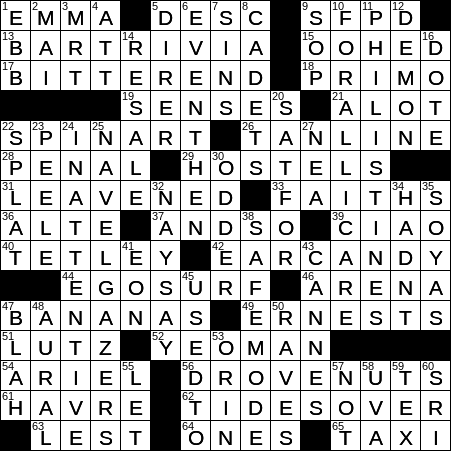 Tetley was founded by Joseph Tetley in Yorkshire in 1837. Joseph and his brother used to sell salt door-to-door from a pack horse and started to distribute tea the same way. They became so successful selling tea that they relocated to London. Notably, Tetley’s was the first company to introduce tea bags in the UK, back in 1953.

49 Rutherford and Shackleton, for two : ERNESTS

The Yeoman of the Guard are the oldest military corps still existing in the UK. The role of the Yeoman of the Guard is to provide bodyguard protection for the British Monarch, although in modern times this role is purely ceremonial. One of the more famous duties of the Yeomen is a ceremonial search of the cellars of the Houses of Parliament prior to the State Opening of Parliament. The search commemorates the Gunpowder Plot of 1605 in which Guy Fawkes attempted to blow up the Parliament building.

54 Disney character who sings “Part of Your World” : ARIEL

62 Satisfies, as with a small snack : TIDES OVER

Something is said to tide one over if it (often money) will see one through a rough patch. The idea behind the verbal phrase “tide over” is that a swelling tide can carry one over an obstacle without effort, as perhaps a reserve fund might keep the lenders from one’s door. The use of “tide” in this sense might come from some famous lines spoken by Brutus in the play “Julius Caesar” by William Shakespeare

“Philistine” is a derogatory term used to label someone as an anti-intellectual, or someone who undervalues art, beauty and intellect. Our use of the word derives from the German word “Philister” that was used originally by university students to describe, in a snide way, the townspeople of nearby Jena in eastern Germany. There had been a row between the students and locals resulting in several deaths. A university cleric admonished the participants in a sermon using a phrase from the Bible’s “Book of Judges”, saying “The Philistines be upon thee”, a reference to the conflict between Samson and the Philistines. Anyway, little did that cleric know how his words would ring out around the world over 300 years later.

12 Something summoned via a pentagram : DEMON