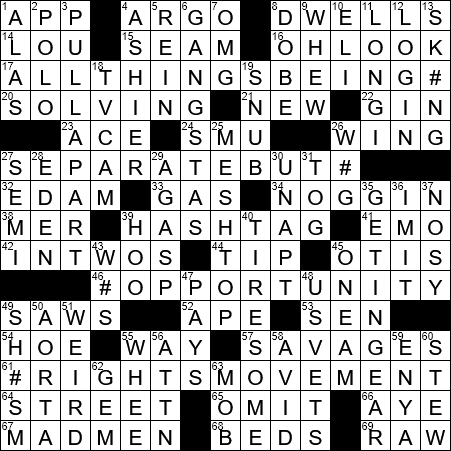 We have a rebus puzzle today, with a HASHTAG in four squares. That HASHTAG represents EQUAL (=) in the across-direction, and “II” (two letters “I”) in the down-direction:

Just tap the screen on your phone …

27 Doctrine that was found unconstitutional in Brown v. Board of Education : SEPARATE BUT EQUAL

Brown v. Board of Education was the US Supreme Court Case that established the unconstitutionality of separate public schools for black and white students. Oliver L. Brown was one of thirteen parents who filed a class action suit against the Topeka, Kansas Board of Education on behalf of their twenty children. The suit called for the city to reverse its racial segregation policy. The final decision by the US Supreme Court, led by Chief Justice Earl Warren, was unanimous in rejecting segregation.

32 It can be substituted for Gouda : EDAM

33 What the sun and Sunoco have in common : GAS

Our sun is a sphere of hot plasma that forms the center of our solar system. The Sun’s mass has two main components, with almost three quarters made up by hydrogen, and a quarter by helium. The continual nuclear fusion reaction in the Sun’s core converts hydrogen into helium, and generates a lot of energy. We should all be pretty grateful to the Sun for generating that energy …

38 Locale where the French may take des vacances : MER

39 Symbol formed by four crossings in this puzzle : HASHTAG

42 How promgoers typically arrive : IN TWOS

Lucky Strike is an R.J. Reynolds brand of cigarette. It was the single most successful brand during the thirties in terms of sales. A marketing campaign in the twenties promoted Lucky Strikes to women, touting it as a cigarette that could help keep the weight down, an alternative to eating candy. Times have changed, thank goodness …

The sport of water polo is thought to have originated in Scotland, where it was a feature of fairs and festivals. Men’s water polo was introduced into the Olympic Games in 1900, making it one of the oldest team sports in the Games.

Rap star Coolio has a web-based cooking show called “Cookin’ with Coolio”. And, he has a cookbook of the same name. Coolio likes to refer to himself as the “ghetto Martha Stewart” and the “black Rachael Ray”.

The middle letter in the word “white” is a long letter I.

At the hour of one a.m., the clock tolls once.