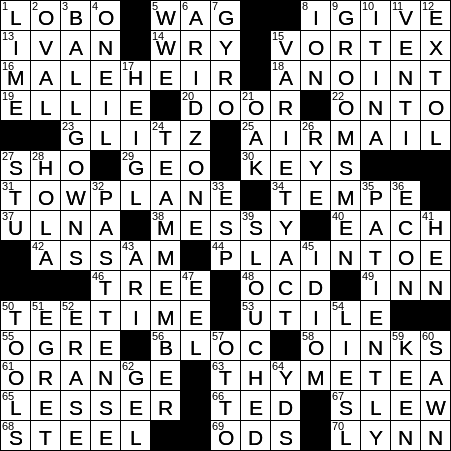 Constructed by: John Guzzetta & Jeff Chen
Edited by: Will Shortz

Themed answers come in pairs that rhyme with each other, but only if we FLIP the order of the words in one element of each pair:

Our word “glitz”, meaning “showiness”, is the Yiddish word for “glitter”.

42 Indian state along the Himalayas : ASSAM

The first Holiday Inn hotel opened in 1952. The name for the hotel chain was inspired by the 1942 movie “Holiday Inn” starring Bing Crosby and Fred Astaire. The Holiday Inn chain has been British-owned since 1988.

“Bloc” is the French word for “block”.

58 Sounds heard here and there in a nursery rhyme : OINKS

A passel is a large group or quantity. “Passel” is a variant of the word “parcel”.

Bethlehem Steel used to be the second-largest steel producer in the country, after Pittsburgh’s U.S. Steel. The company shut down its steel plants in 1995, and went bankrupt in 2001. The land where the main plant stood in Bethlehem, Pennsylvania was purchased in 2007 and is now the site of a casino. Iron-ically (pun intended!), the developers building the casino had problems acquiring enough steel for construction due to a worldwide steel shortage …

Our modern sport of tennis evolved from the much older racquet sport known as “real tennis”. Originally just called “tennis”, the older game was labeled “real tennis” when the modern version began to hold sway. Real tennis is played in a closed court, with the ball frequently bounced off the walls.

3 Concerns for Cinderella and her stepsisters : BALLGOWNS

“I, Tina” is a 1986 autobiography by Tina Turner. The book was so successful it was adapted into a movie called “What’s Love Got to Do With It?” The film version was released in 1993 and stars Angela Bassett as Tina Turner.

12 Sing the praises of : EXTOL

Katherine Heigl is best associated with the television show “Grey’s Anatomy”, in which she plays Dr. Izzie Stevens. That’s not a show I ever watched, but I did enjoy the espionage show “State of Affairs” in which Heigl played the lead. I guess I was in the minority though, as NBC cancelled “State of Affairs” after only one season …

26 Traditional ingredient in a manhattan : RYE

28 Greeting south of the border : HOLA

54 Eldest von Trapp daughter in “The Sound of Music” : LIESL