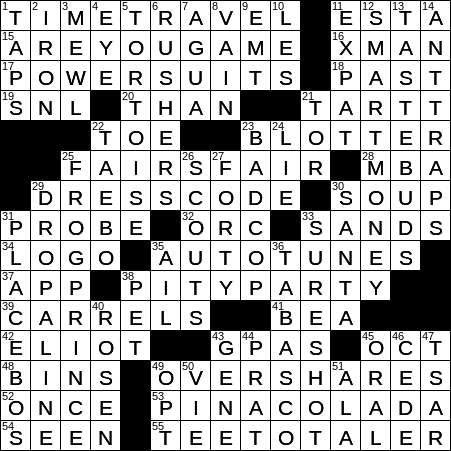 19 Originator of parody ads for 5-hour Empathy and Tylenol BM, in brief : SNL

To soup up an engine is to increase its horsepower. The verb probably derives from the older slang term “soup”, which was a narcotic illegally injected into racehorses to make them run faster.

A carrel is a nook located near the stacks in a library. Such a space is usually partially partitioned off to allow private study.

41 Arthur with two Emmys and a Tony : BEA

55 One who passes the bar? : TEETOTALER

5 Fabled beneficiary of a nap : TORTOISE

13 They’re on the tip of your tongue : TASTE BUDS

The Raptors are the NBA basketball team based in Toronto, Ontario. The franchise was founded, along with the Vancouver Grizzlies, when the NBA expanded into Canada in 1995. However, the Grizzlies moved to Memphis in 2001, leaving the Raptors as the only Canadian member of the league. The selection of the name “Raptors” in 1995 was strongly influenced by the popularity of the movie “Jurassic Park in the mid-nineties.

The North American Defense Command (NORAD) isn’t just a US operation but is a cooperative arrangement between Canada and the United States. The two countries entered into an agreement to establish NORAD in 1958, mainly due to the concern that there would be little or no warning of a missile attack from the Soviet Union that came over the North Pole. NORAD also tracks Santa Claus coming from the North Pole every Christmas, and these days publishes Santa’s location on Christmas Eve on its website. The tracking of Santa started into 1955 when a local Sears store placed an advertisement in a Colorado Springs newspaper with a phone number that could be used to call Santa Claus. The newspaper accidentally printed the number for the Continental Air Defense Command (a precursor to NORAD). The officer on duty instructed his staff to give all children who called a “current location” for Santa. Today, NORAD gets about 120,000 phone queries about Santa’s location every year, and the website gets about 20 million visitors.

Edward McIlhenny created Tabasco Sauce in 1868. He recycled old cologne bottles as a container for the sauce so that he could present it to friends, and when he went into business he ordered new cologne bottles for the commercial product. Even today, the Tabasco Sauce bottle bears a striking resemblance to the bottle used to distribute 4711 cologne.