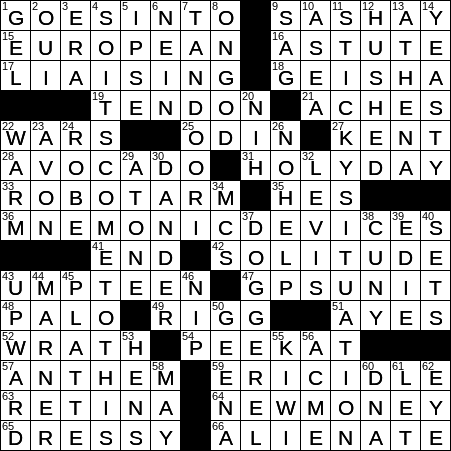 Constructed by: Emily Carroll & Erik Agard
Edited by: Will Shortz

9 Proceed down the runway, perhaps : SASHAY

25 For whom the ravens Huginn and Muninn collect intel, in legend : ODIN

According to Norse mythology, the god Odin had a pair of ravens that flew all over the world each day to get him information. The ravens were named Huginn and Muninn.

A California roll is a kind of sushi roll that is made inside-out, with the seaweed inside and the rice on the outside. A California roll often includes rice, seaweed, cucumber and avocado. The dish originated in Los Angeles where a chef at the Tokyo Kaikan restaurant substituted avocado for fatty tuna (“toro”) in a traditional sushi recipe. The chef also put the seaweed on the inside, as his American customers preferred not to look directly at seaweed while they were eating it!

36 “My Violent Evil Monster Just Scared Us Nuts” and others : MNEMONIC DEVICES

The word “umpty” was introduced as slang for a Morse code dash. In the early 1900’s, the same term came to mean “of an indefinite number”, and was associated with the numerals divisible by ten, i.e. twenty, thirty, forty, etc. The extended adjective “umpteen” began to appear during WWI as army slang.

Diana Rigg was a marvelous actress from England who was best known for playing Emma Peel on the hit sixties show “The Avengers”. Rigg also won an Emmy for her performance in a 1997 television adaptation of “Rebecca”. In my humble opinion, she was also the best-ever Bond girl (opposite George Lazenby, the worst-ever Bond guy), in “On Her Majesty’s Secret Service” …

“Ipse dixit” is Latin, a phrase meaning “he himself said it”. The term is used in contemporary English to describe an unsupported assertion, one usually by someone in authority.

The German parliament is known as the “Bundestag”, and has been since its founding in 1949. The Bundestag meets in the magnificent Reichstag building in Berlin.

9 Concern about an old sofa : SAG

30 Something to sneeze at? : DANDER

Dander is microscopic material shed from an animal’s body. It is small enough to travel through the air, and becomes part of house dust. It is usually when traveling through the air that it can be breathed in by humans, and cause an allergic reaction. Dandruff is similar to dander, except that the skin that is shed comes from the scalp instead of the main body, and the flakes are larger in size.

Clara Bow was a fabulous silent film star, with her most famous movie being “It” from 1927. Clara Bow’s performance was so celebrated in the movie that she was forever to be known as the “It girl”. The term “it” was a euphemism for “sex appeal”, and that is what Clara Bow was known to “exude”. Bow applied her red lipstick in the shape of a heart, and women who copied this style were said to put on a “Clara Bow”.

40 Preceders of spikes, in volleyball : SETS

45 Tributary of the Missouri : PLATTE

A demonym is a term used for natives of a geographical location, with that term being derived from the name of that particular location. For example the Irish come from Ireland, and the Americans come from America.