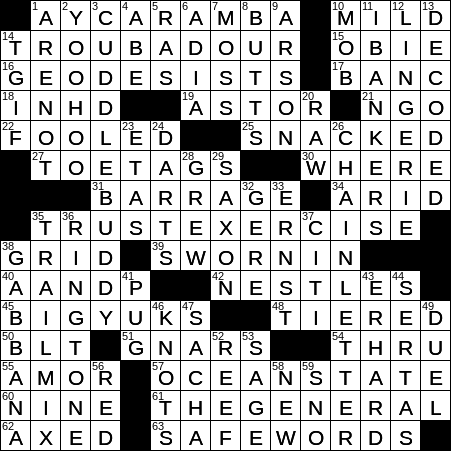 1 Catchphrase on “The Simpsons” : AY, CARAMBA

Bart Simpson apparently uses the expression “Ay, caramba!” when he is positively surprised about something, often something related to a female I am told …

16 Experts in determining the exact shape and size of the earth : GEODESISTS

In its original sense, the word “barrage” described the act of barring, of creating a barrier. In WWI, the French coined the phrase “tir de barrage” meaning “barrier fire”, artillery and mortar fire that was intended to isolate and objective. It was from this sense that we now use the term “barrage” to describe a massive delivery of gunfire, or figuratively, a concentrated outpouring of speech or writing.

To be off-the-grid is to adopt a lifestyle that eschews the support of remote infrastructure, such as the electrical grid and public sewer system. My personal observation is that more and more people in the West are striving to live off-the-grid, although not many seem interested in breaking the link to the Internet …

40 Discontinued grocery chain that was once the U.S.’s largest retailer : A AND P

55 Spanish opposite of odio : AMOR

In Spanish, the opposite of love (amor) is hate (odio).

Spanish moss is seen growing all over larger trees, particularly in the southeast of the US. Also known as beard lichen, Spanish moss is neither a moss nor a lichen. Rather, it is a flowering plant, although the flowers are tiny and difficult to spot.

12 Slips and such : LINGERIE

23 Requests made to latecomers, in brief : ETAS

24 Game in which the object is to end with zero points : DARTS

Exactly … please don’t pass it on …

To burgeon is to sprout, to put forth new buds. The term can also be used more figuratively to mean to grow or develop rapidly.

“An Officer and a Gentleman” is a 1982 film starring Richard Gere as a candidate in the US Navy flight school who meets up and falls in love with a local girl played by Debra Winger. Despite the love shown on the screen between the characters played by Gere and Winger, it is fairly well known that the two leading actors did not get on well at all during the making of the film. At one point, Winger referred publicly to Gere as a “brick wall”.

Saltimbocca is a dish from southern Europe made of veal topped with prosciutto and sage, and then marinated in perhaps wine. The name “saltimbocca” is Italian for “jump in the mouth”.