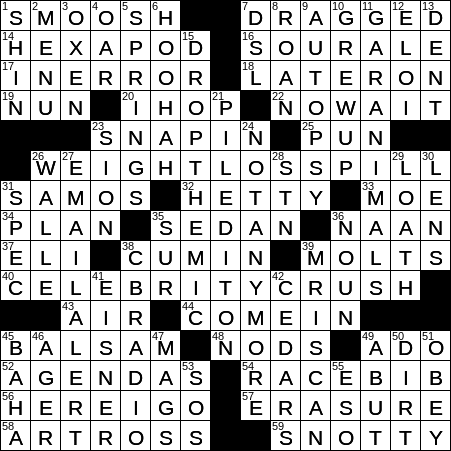 An insect is a six-legged arthropod, i.e. a hexapod.

Samos is an island in the eastern Aegean Sea off the coast of Greece. Samos is the birthplace of the famed mathematician Pythagoras, the philosopher Epicurus, and the astronomer Aristarchus of Samos. The latter was the first person known to have proposed that the Earth revolves around the sun.

Chapati is an unleavened flatbread that is associated with India. The name of the bread comes from the Hindi word “chapat” meaning “flat”.

Cumin is a flowering plant native to the region stretching from the eastern Mediterranean to East India. Cumin spice is made from the dried seeds and is the second most common spice used in the world (only black pepper is more popular). Cumin is particularly associated with Indian cuisine and is a key ingredient in curry powder. Lovely stuff …

To slough off is to cast off, especially when one is talking about the skin of a snake or other animal.

Art Ross was a Canadian who played professional hockey from 1905 to 1918. Ross then worked as a game official on the ice, before launching a second career as coach and general manager of the Boston Bruins. In 1947, Ross donated the Art Ross Trophy to the NHL that is awarded annually to the league’s highest scorer.

3 Some travelers along the Oregon Trail : OXEN

In the 1895 novella by H. G. Wells called “The Time Machine”, there are two races that the hero encounters in his travels into the future. The Eloi are the “beautiful people” who live on the planet’s surface. The Morlocks are a domineering race living underground who use the Eloi as food.

In the preface of Dan Brown’s novel “The Da Vinci Code”, the Priory of Sion is presented as a secret society that does in fact exist. However, there is a lot of evidence that the priory was an invention, and created in forged documents in the sixties. Regardless, Dan Brown’s book is a really enjoyable read, in my humble opinion …

38 What some handles are created for : CB RADIO

One’s “handle” is one’s name, especially one used on a CB radio.

42 Materials for some chests : CEDARS

53 Letters often meant to be read from afar : SOS