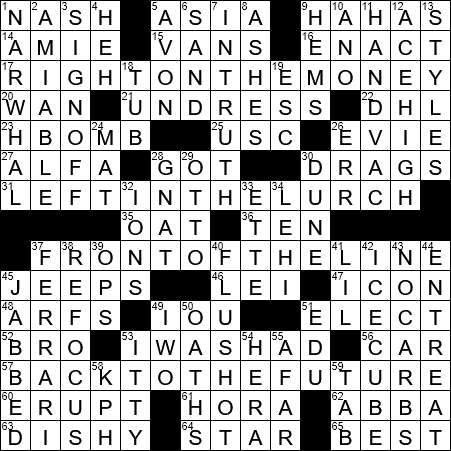 Themed answers each start with a DIRECTION, and end with THE (NOUN):

The rhino is a homely beast,
For human eyes he’s not a feast.
Farwell, farewell, you old rhinoceros,
I’ll stare at something less prepoceros.

26 Girl’s name that sounds like two letters of the alphabet : EVIE

31 Abandoned and helpless : LEFT IN THE LURCH

To leave someone in the lurch is to abandon them in a difficult position. The phrase comes from an old French game called “lourche” or “lurch”, which was similar to backgammon. A player left “in the lurch” was in a hopeless position from which he or she could only lose the game.

57 Classic Michael J. Fox movie : BACK TO THE FUTURE

34 Where Samson slew the Philistines : LEHI

In the story of Samson in the Bible, Samson is tied up with ropes and taken to Lehi where he breaks free of his bonds and uses the jawbones of an ass to slay one thousand Philistines. The full name for Lehi is Ramath Lehi which translates as “jawbone hill”.

43 Dieting strategy that may lead to ketosis : NO CARBS