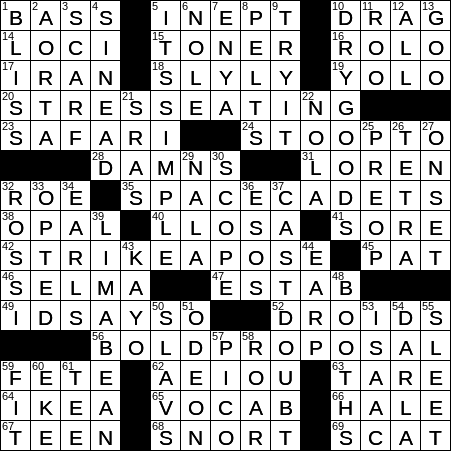 Constructed by: Chase Dittrich
Edited by: Will Shortz

Back in the 18th century “drag” was slang for a wagon or buggy, as it was “dragged” along by a horse or horses. In the 1930s, the underworld adopted “drag” as slang for an automobile. This sense of the word was imported into automobile racing in the forties, giving the name to “drag racing”. A drag race is basically a competition between two cars to determine which can accelerate faster from a standstill.

17 Land between the Caspian Sea and the Persian Gulf : IRAN

Opal Tometi is a Nigerian-born human rights activist who co-founded the Black Lives Matter movement in 2013, along with Alicia Garza and Patrisse Cullors. One of Tometi’s major contributions was setting up the social media aspects of the movement.

52 Providers of some comic relief in “Star Wars” : DROIDS

64 Retail giant that opened its first U.S. store near Philadelphia in 1985 : IKEA

Sinéad O’Connor is a singer-songwriter from Dublin, and a somewhat outspoken and controversial character. My sister-in-law was in the same class as her in high school, and she tells me that Sinéad stood out among her peers even back then.

Florida State University (FSU) is located in Tallahassee, the state capital of Florida. The school’s athletic teams are known as the Seminoles (sometimes the “‘Noles”). The team name was chosen in 1947 by the students in a vote, and alludes to the Seminole people of Florida.

Actor Kurt Russell’s career started when he was a child playing a lead role in the TV Western series “The Travels of Jaimie McPheeters” in the sixties. Russell met actress Goldie Hawn on the set of the 1984 film “Swing Shift”, and the two have been in a committed relationship ever since.