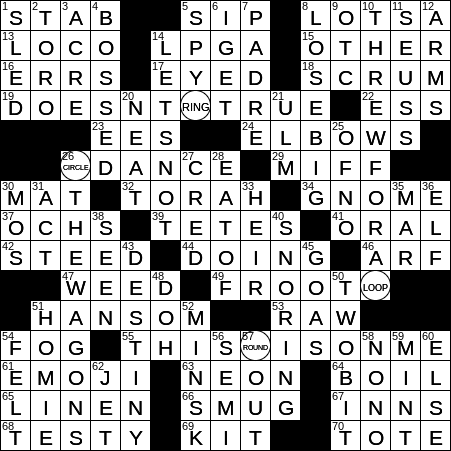 Constructed by: Joe Kidd
Edited by: Will Shortz

Today’s Theme (according to Bill): Disc-O

Themed answers each include disc-like objects in rebus squares in the grid:

The Solheim Cup is a golf tournament held every second year in which teams from Europe and the US compete. It is the female equivalent to the Ryder Cup and is held in alternating years with the male tournament. The tournament is named for Karsten Solheim, a Norwegian-born golf club manufacturer who led the effort to establish the competition. Solheim equipment is sold under the brand name of PING.

If you’ve ever seen a rugby match, you’ll recognize the “scrum”, where the players designated as “forwards” bind together and push against the forwards on the opposing team. It’s a way of restarting the game after various types of stoppages. Scrum is short for “scrummage”, which in itself is a variation of “scrimmage”. And “scrimmage” has its roots in the word “skirmish”. If you get the chance, take a look at the Matt Damon-Morgan Freeman movie called “Invictus”, directed by Clint Eastwood. It’s all about rugby in South Africa after Nelson Mandela came to power. A powerful film …

There are two letters S (ess) in the word “ess”.

The Torah, the first five books of the Hebrew Bible, are traditionally believed to have been written by Moses. As such, they are sometimes referred to as the Law of Moses, or Mosaic Law. Those five books are:

The Edwardian era in the UK started with the death of Queen Victoria in 1901 and the succession to the throne of her son, King Edward VII. The period was known for increased interest in women’s suffrage and continued industrial development. The era ended with the death of the king in 1910, and was soon followed by the catastrophe that was the First World War.

54 It “comes on little cat feet,” per Carl Sandburg : FOG

Carl Sandburg was a writer from Galesburg, Illinois. Sandburg won two Pulitzers for poetry, and one for a biography titled “Abraham Lincoln: The War Years”.

Toro is a manufacturer of lawn mowers and snow removal equipment that is based in Bloomington, Minnesota. The company was founded in 1914 to build tractor engines.

The Grinch is the title character in Dr. Seuss’s 1957 children’s book “How the Grinch Stole Christmas!” He is a grouchy creature who lives as a hermit in a cave outside the town of Whoville. The Grinch’s only companion is his dog Max. Based on Seuss’s hero, we now use the term “grinch” for someone who is opposed to Christmas festivities or who is coarse and greedy in general.

William Jennings Bryan was an American politician. He was a noted figure in the Democratic Party, and Secretary of State under President Woodrow Wilson. Bryan ran for US president three times, unsuccessfully of course. But he was a great orator, and used his skill to great effect in his campaigning. In fact, it was Bryan who created the national stumping tour, traveling around the country making hundreds of speeches, in days when the other candidates stayed at home.

The American quarter is a little unusual in the world of decimal currency, if you think about it. Most currencies have a “20-cent” coin, which is easier to work with mathematically. The US went for the quarter in deference to the practice of dividing Spanish Milled Dollars into eight wedge-shaped “bits”. That’s also why the quarter is sometimes referred to as “two bits”. We’ve been using the adjective “two-bit” to mean “cheap, tawdry” at least since 1929. State quarters were introduced in 1999.

Minsk is the capital of Belarus, formerly known as the Byelorussian Soviet Socialist Republic. One of Minsk’s more infamous residents was Lee Harvey Oswald, who lived there from 1960 to 1962.